When Travel Dreams Fade – The Eclipse That Wouldn’t Wait 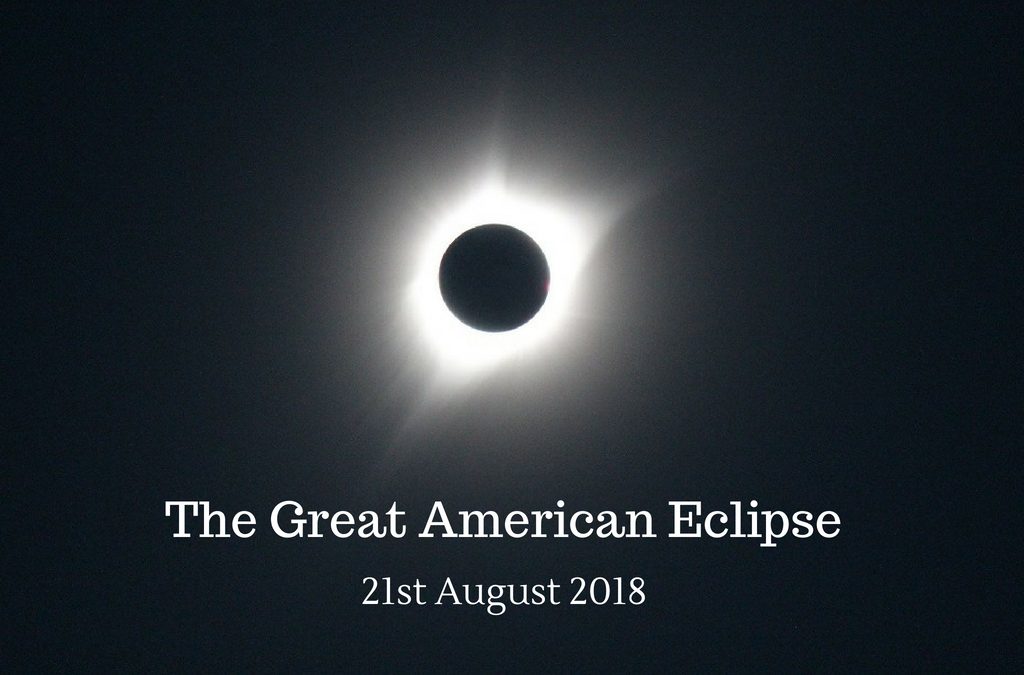 I’m sitting here writing this tale of discarded travel plans, wondering whether I should have let it get to me so much. I mean, I’m not the only one who has had to soak up the disappointment of cancelling a dream holiday due to those pesky ‘circumstances beyond our control’. But as a unique and memorable travel adventure, this trip was off-the-scale awesome. And the series of setbacks leading up to this moment at my laptop, well…I couldn’t have made it up.

For ages, it seems, I’d been waiting for this event – ever since the idea had burst onto my mind a couple of years earlier like the brightest firework you’ve ever seen.

Why was this trip so special?

Anyone who knows me will be in no doubt as to what my prime focus was for 2017 –  the USA total eclipse of the sun on 21st August. I’ve had the good fortune to see one before, in France back in 1999, the same eclipse that clipped the Cornish coast in the UK.

This upcoming eclipse, which spanned the entire breadth of the USA, was particularly accessible, and a pretty big deal as far as States-side tourism goes. Every accommodation provider within reach of the path of totality had been fully booked for months, RV bookings had surged and campsites in the region were expected to burst at the seams.

Total eclipses don’t often appear in places with such a good infrastructure and advanced services, so it was a rare opportunity to engage more people than ever before in a rare celestial event. And I had intended to be there and join the masses, as the sky went deep purple in the daytime and the sun revealed its fiery secrets.

If that wasn’t already enough…. 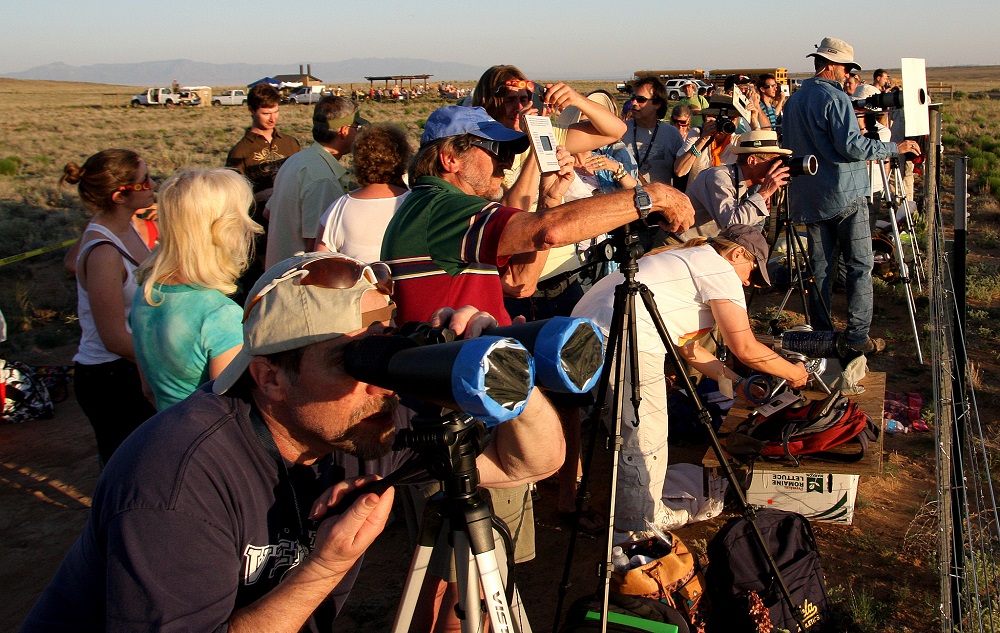 And why was it extra special?

A total eclipse of the sun is a breath-taking and incomparable event on its own. But what if you mix it up with one of the all-time classic travel experiences? It had come to me in a moment of inspiration, the kind you wish you could bottle up for future use. When I’d begun to properly plan my eclipse trip the previous autumn, I couldn’t decide where in the USA to base myself. The path of the eclipse was to run from Oregon in the north-west, to South Carolina in the south-east, sweeping over no less than 14 states, each of them with their own appeal.

Oregon, for example, was the starting land point for the eclipse and has garnered a lot of attention as a destination in recent years. Or how about one of the great mid-western states such as Kansas or Nebraska – both of which are slap-bang in the middle of Tornado Alley. I could mix up the eclipse-chasing with a spot of storm-chasing. 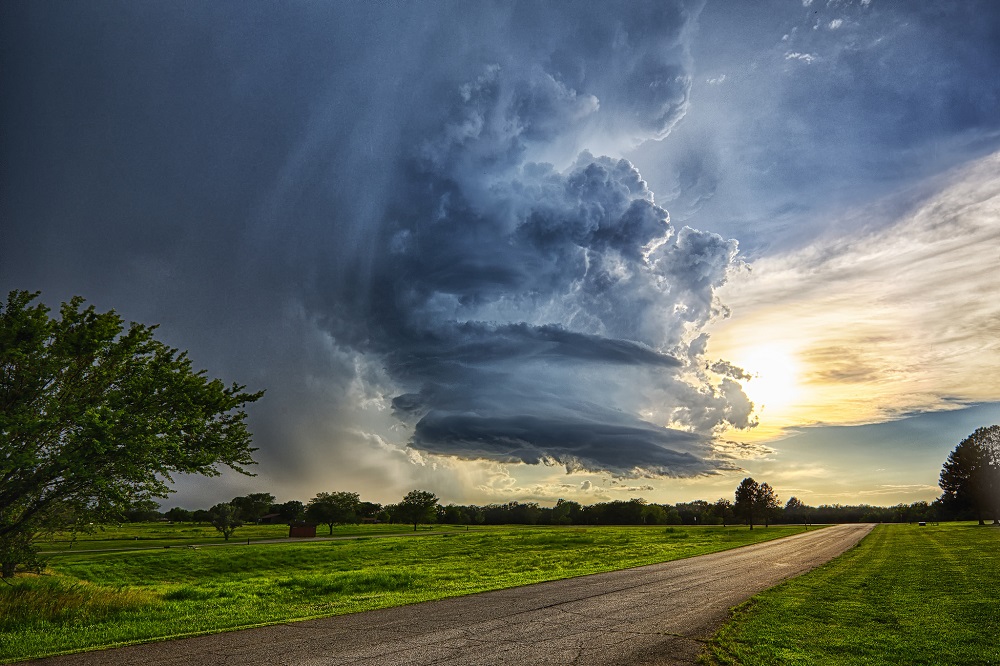 Storm cell over land in Kansas. Photo by Patrick Emerson

But I was also drawn to the lushness and chequered history of South Carolina, and the romantic notion of bidding farewell to the eclipse at Cape Romain Harbour, the last piece of land touched by the eclipse path. I was spoilt for choice.

Then I remembered a previous discussion with my travelling companion-to-be, when we had discussed whoop-whooping along the classic Route 66 in a convertible car, with hair and scarves whiplashing our faces. At just shy of 2,500 miles long, the famous ‘Mother Road’ crosses from Chicago in the north-east to Los Angeles on the Pacific Coast. Say ‘classic road trip’ and I’ll bet it’s what comes to mind. 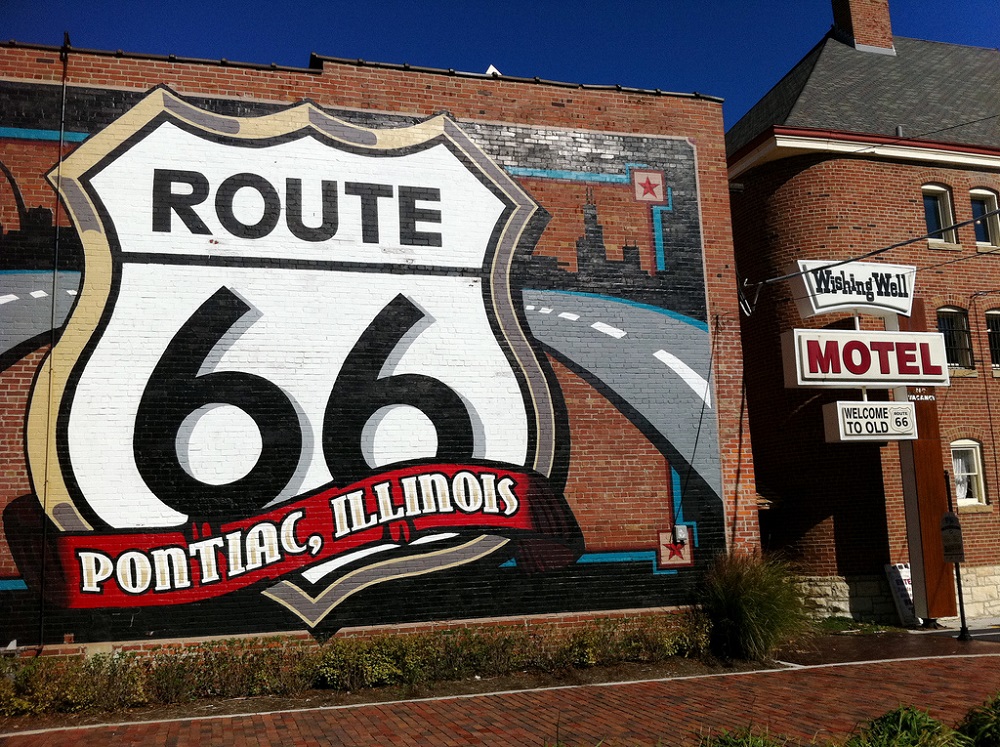 And it occurred to me – if you superimposed the eclipse path over Route 66 on a map, you’d be planting a massive virtual kiss on the American landscape, with the two tracks meeting in the modest little town of St Clair, some 50km or so from St Louis, Missouri. It was perfect. My mission (and I wholeheartedly chose to accept it) was to set off along Route 66 from Chicago about a week before the eclipse, and make my way to St Clair for the big day itself.

I had no reason to believe this was going to be anything other than utterly awesome. 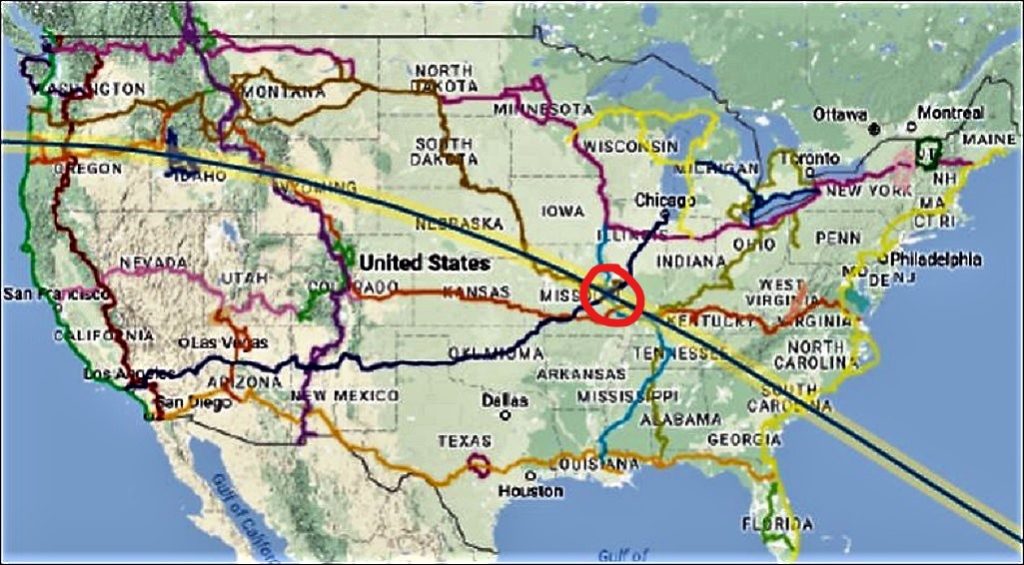 The first sign I may not be able to pull this one off came in October 2016. My travel buddy backed out of the trip unexpectedly as her son had decided to get married in the same month as the eclipse. A happy reason, of course, except it meant accommodation and vehicle costs couldn’t be shared. I wasn’t sure if I could stretch to covering it all myself. But at that stage, it was more of an inconvenience than an out-and-out dealbreaker.

Challenge number two came in the shape of a thyroid nodule, diagnosed the following January. It meant surgery, which was scheduled for May – the only way to find out for sure if the nodule was benign. Before I even had a chance to decide what that meant for my eclipse extravaganza, the third and final obstacle slapped me in the face one Monday morning in mid-March.

I was made redundant from my job and was out the revolving doors by early April.

The salary had been my financial bread & butter and there was no spare funding in a carrier bag under the bed. I could carry on for a couple of months, but my little financial security blanket had been whipped away from me. Priorities changed and finding a new source of income whilst waiting for a date with my surgeon reluctantly took precedence. But the thought of quitting ­­my eclipse/route 66 extravaganza…. just NO!

Still, a compromise was becoming increasingly necessary because ready or not, the eclipse was happening on August 21st. 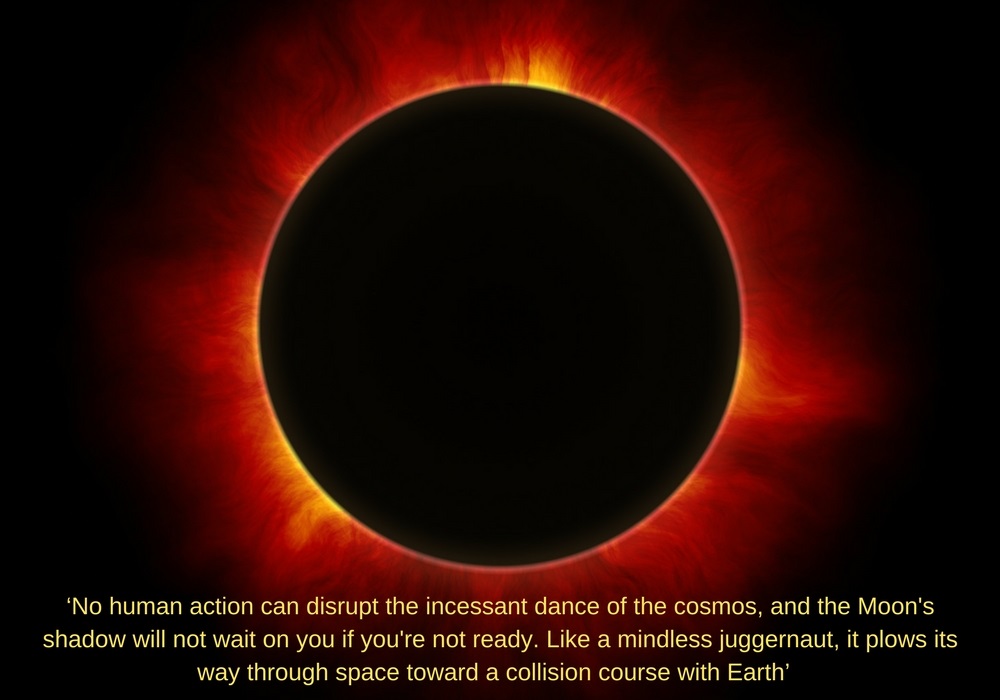 The spectacular solar corona during a total eclipse. Word credit to eclipse2017.org

Knowing when to call it quits

Plan B began to take shape –  I’d cut the trip to 1 week, and base myself in St. Louis, Missouri. A city with a deep musical legacy that would keep me in exploration mode until I nipped down the highway to St Clair for my appointment with the cosmos. And I’d still be combining the eclipse with Route 66, if only at one intersection. A road stop instead of a road trip. May passed by and the surgery was rescheduled for mid-June. It was getting late in the day to book decent flights and there was still no regular income, but I was at least excited again, and mentally leapfrogged all concerns to imagine nights in smoky jazz clubs and two minutes under a blackened sun.

I was soon jolted back to reality. A phone call less than a week before the surgery date, brought a second reschedule to the 27th July – less than 3 weeks before I planned to leave for the USA. It was all unravelling before me. With a standard 2-week recovery period, I’d probably still not be in the right condition for the considerable travel, hustle and bustle involved. A 5cm surgical wound to the front of your neck does NOT easy sky-observing make!

A few more days dripped by before I came to my senses and ditched the dream trip, completely and irrevocably, with no thoughts of a Plan C. A trip of that nature needs methodical planning and a reasonable amount of certainty that you’ll be fit enough to see it through. It’s not the first time that my major plans have played the game of chance with unforeseen circumstances – and lost, most notably when my round-the-world trip was cut short after I caught pneumonia in Siberia.

But this time, it felt personal. I was gutted, pretty mad at the world, and resentful of my situation.

You get knocked down, but you get up again

But dwelling miserably in the doldrums wasn’t going to do me any good.

Health comes first, always. If you have that, most things are possible. And in those days leading up to the eclipse and my medical results (and yes, I got the all-clear) I kept myself positive by focussing on new travel ideas. Perhaps another extended backpacking trip was due, the last one being South America in 2012. 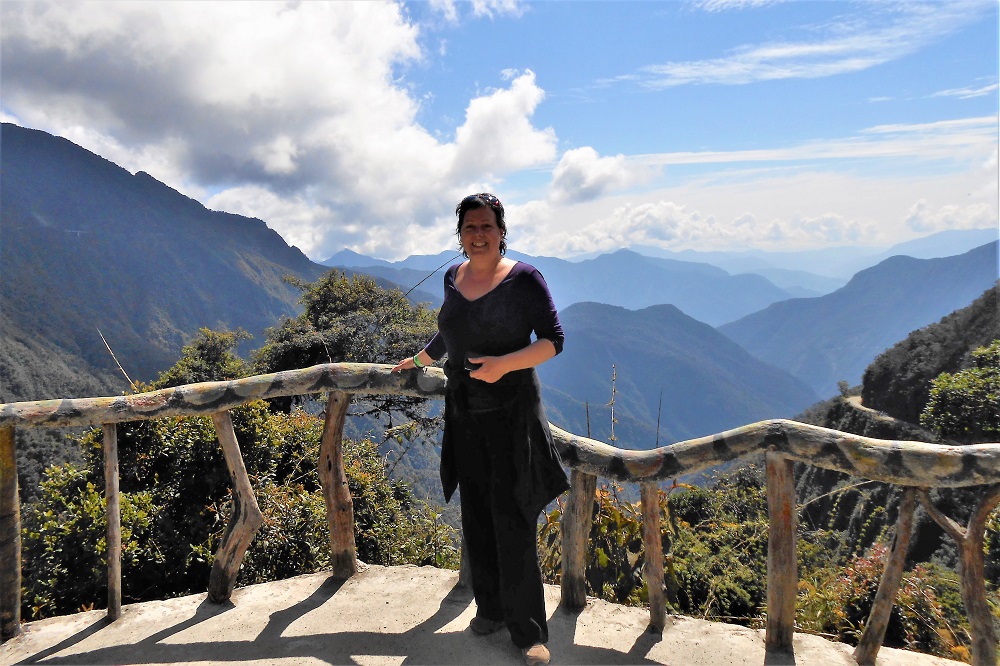 Fond memories of South America – on the Death Road in Bolivia.

In fact, why not South America again, I thought? It keeps drawing me back, and I missed so much the last time – especially the astronomical observatories in the Chilean Atacama Desert. A consolation astro-trip to compensate for the loss of another was on the cards. Meanwhile, the planets keep spinning, I told myself, and there’d be another total eclipse one day. I decided to find out exactly when and where and suddenly, I’d gone full circle – from excitement, via doubt and crushing disappointment, right back to gleeful anticipation.

Incredibly, just 2 years after the USA spectacle, the next total solar eclipse passes over Chile and Argentina, in July 2019. Who knows whether I’ll get to this one, I take nothing for granted. But renewal of hope is a great tonic, so right now, as we often say in astronomical circles, things are looking up. 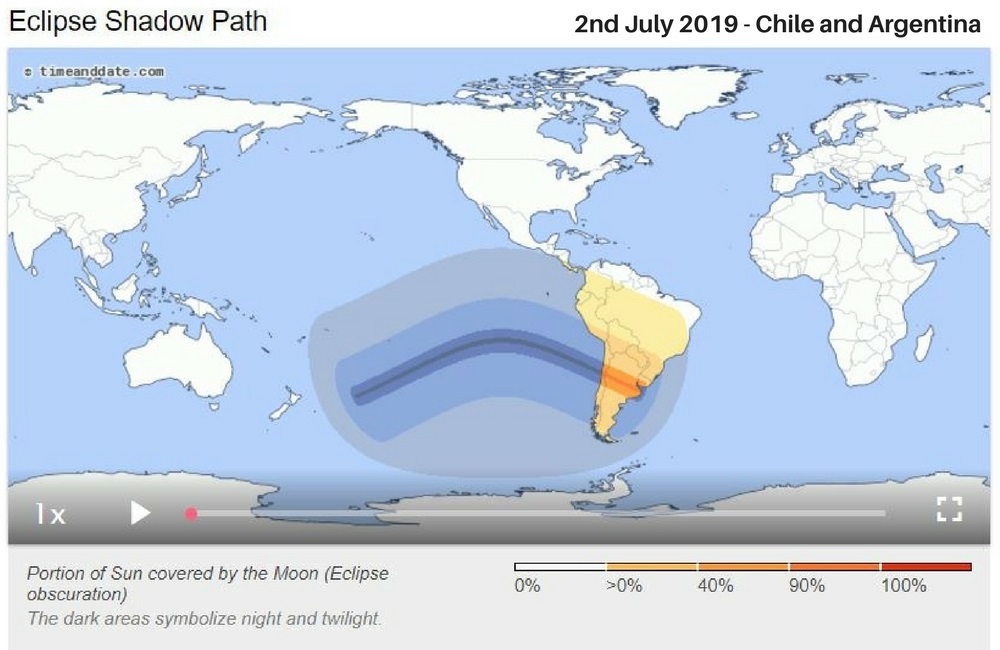 Have you ever had to give up on the travel dream-of-your-lifetime? How did you deal with the disappointment and what did you learn from it all? I’d love to hear your examples – there’s comfort in solidarity!