The Streets of London at Christmas

The festive season is upon us, and the Christmas decorations of London dazzle the streets as they do each year…..so if you’re venturing to the city centre for a spot of luxury shopping, don’t forget to look up! 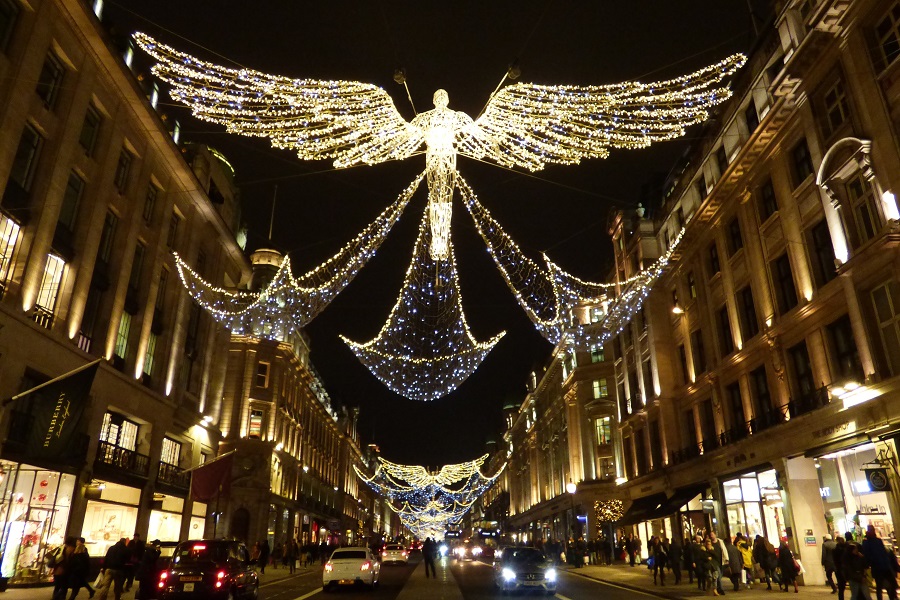 I don’t get into London much these days, so when I do, I really want to make it count. And there’s no better time to get a sense of what London does best, than in December. The shops are overflowing with delectable gifts, the shop windows are decadently dressed to impress, the aroma of mulled wine wafts around temptingly and the crowds, when not striding purposefully towards a department store or tube station, huddle for some roasted chestnuts at a winter stall or a swift half at a heaving corner pub. So off I went one Friday afternoon, to meet the friend who was to join me in a pre-Christmas amble through the seasonal glitz and glamour of our capital city.

Warming up in a traditional London pub

I hopped off the tube at Bond Street, at the core of the hive of shoppers and headed off to meet my friend at a bijou and unassuming little corner pub, the Angel in the Fields. A crafty ale, downed near the crackling fire warmed us up and got us into the festive mood. It’s a snug of a watering hole, with fine pub grub upstairs (best book in advance though, as space is very limited).

And so, full of good cheer and mellow beer, we set off a-wandering, the only mandate being to see the essential Christmas lights of the city centre, whilst allowing for spontaneity. Here’s what we found while meandering, strolling and generally wandering about…..

From Handel to Hendrix – A musical legacy in Brook Street

In the late 1960s, rock star Jimi Hendrix rented a flat (No. 23) in Brook Street, during a period of hectic press and media work, in addition to concerts and TV appearances. It’s still the only officially recognised Hendrix residence in existence.

Over 200 years previously, No. 25 next door had been occupied by renowned baroque composer George Frideric Handel (he of Water Music fame). Handel remained in residence for many years, as opposed to Hendrix’s few fleeting months, but this dual musical legacy can now be celebrated by visiting the Handel House Museum, within the apartment block itself. In 2014 the Handel House Trust was awarded a Heritage Lottery Fund grant to restore the Hendrix Flat permanently, as well as creating a new studio space and improving visitor facilities. 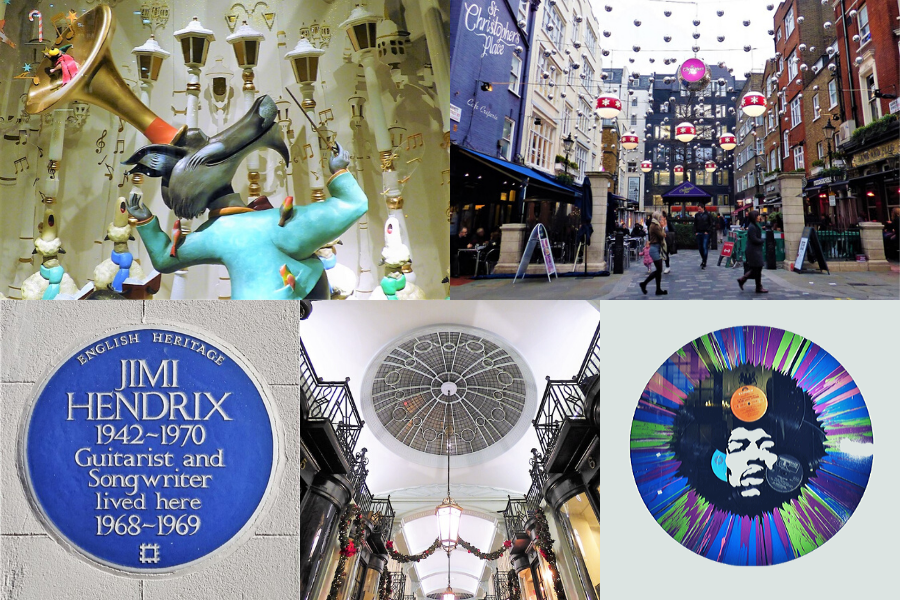 A nostalgic return to Burlington Arcade

Strolling through Burlington Arcade, I was reminded of when I once worked for the British Astronomical Association at nearby Burlington House. I’d visit the Arcade during my lunch break and wonder how the other half lived. Things haven’t really changed here, nor at Piccadilly Arcade. There’s unabashed luxury a-plenty, oozing in all its forms from behind the glass frontage of each outlet, and the uniformed guards, or Beadles, continue to patrol and add that appealing Olde Worlde touch. 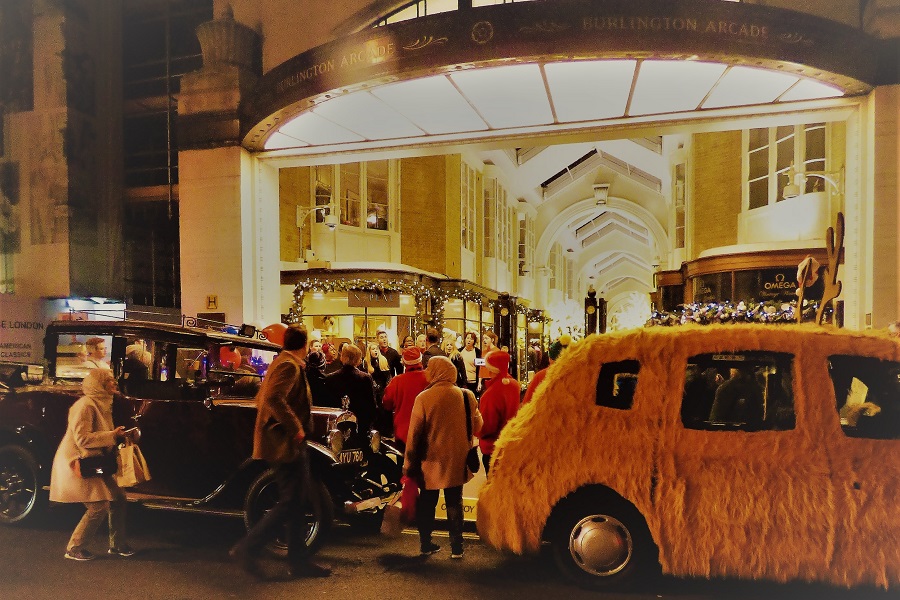 The creativity and skill of London’s window display designers is as impressive as ever. There are cute teddy bears, resplendently attired mannequins and delicious delicatessen displays, and when it comes to displaying decadence, Fortnum and Mason are the masters, with offerings over the years including lavish hampers and a series of quirky pseudo-fairytale scenes, all with a Christmas theme, of course. 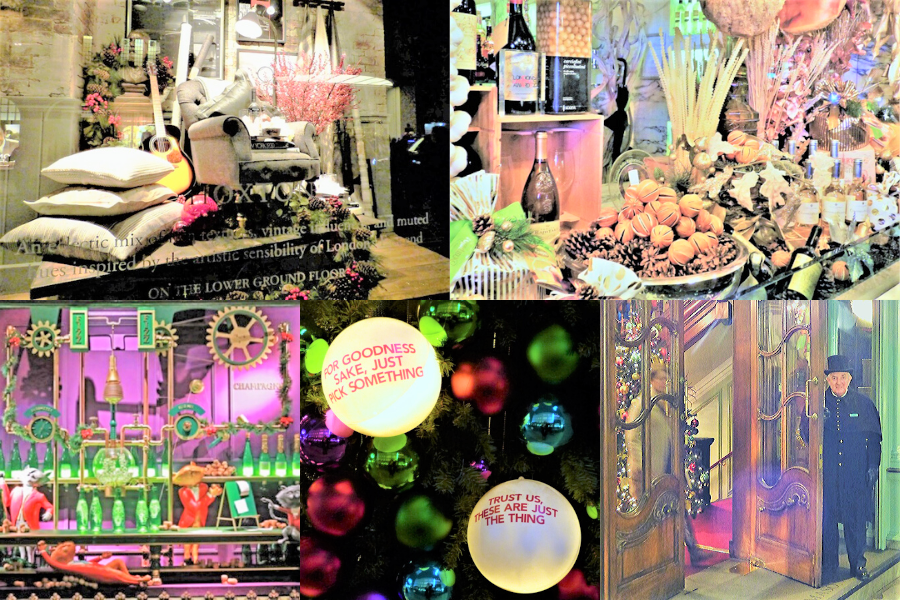 Whatever you find, you can be sure it will speak of extravagance that most of us can only imagine. My favourite of all the window displays was, ironically, the simplest and least expensive of all. A gathering of brightly lit baubles each cheekily displaying a message of retail temptation. Amusingly, I forgot to note the name of the company, so busy was I chortling at the irony of it all. 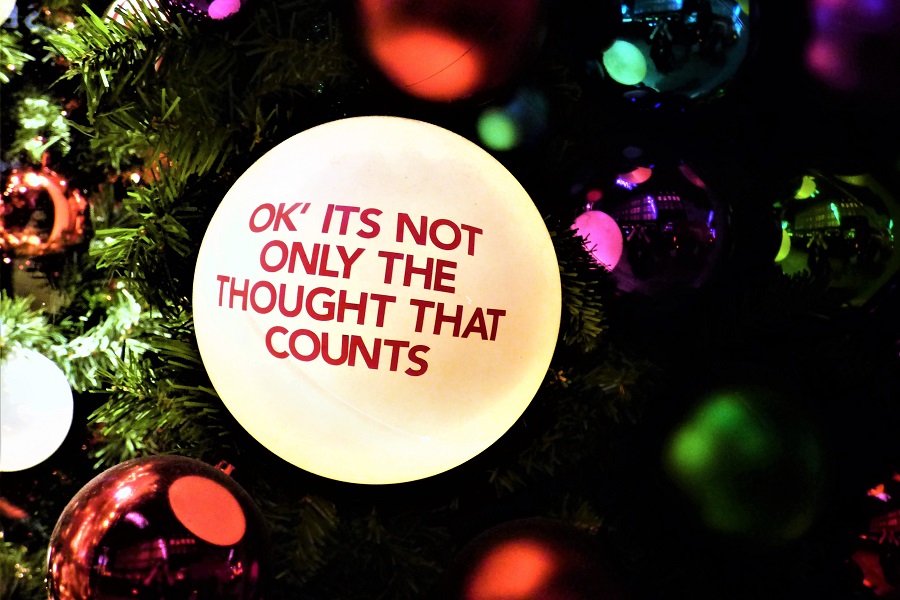 Of course, the main reason we were here: the classic Christmas lights of cosmopolitan, historic, buzzing London. There are glitterballs and giant baubles; mercurial figures glistening above us; sparkling bowl-shaped structures; crystalline pillars and the classic winged Angels of Regent Street. 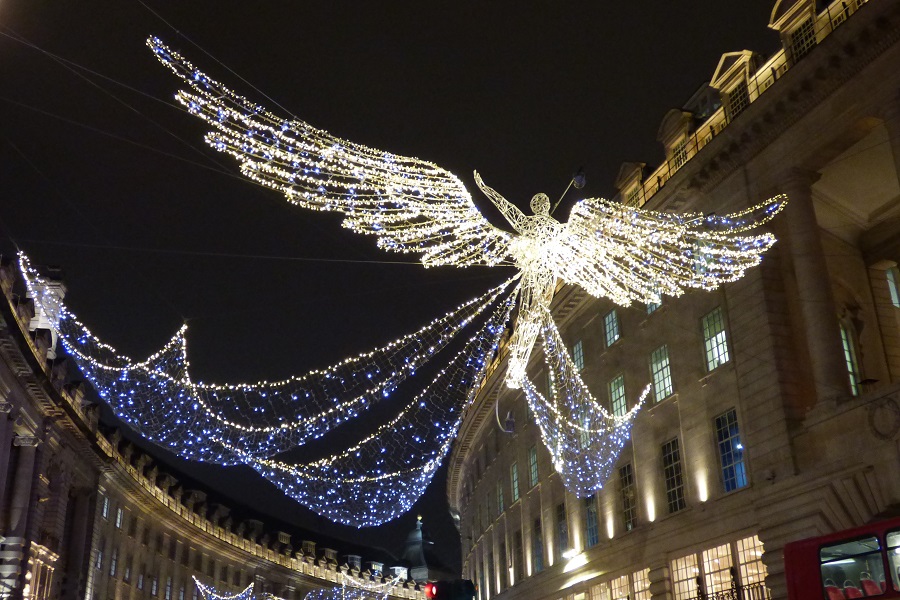 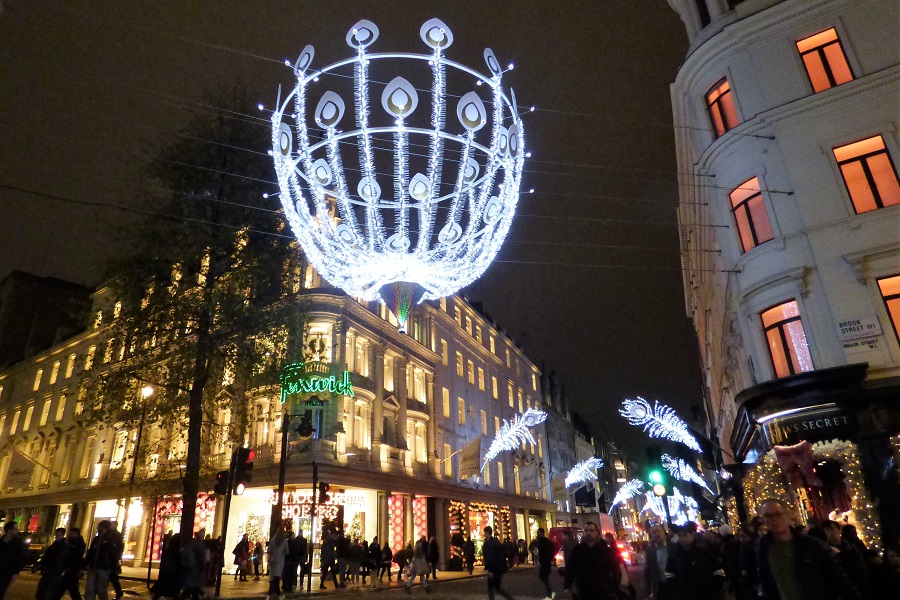 Photographs really don’t do them justice, especially when the lights flicker in special sequences, creating a sense of motion to echo the surrounding hubbub. It must be an incredible feat of engineering to set it all up (and to take it all down again), and yes, it must cost a pretty packet and all, but what the heck – it’s London and it’s Christmas, and I for one love it all. 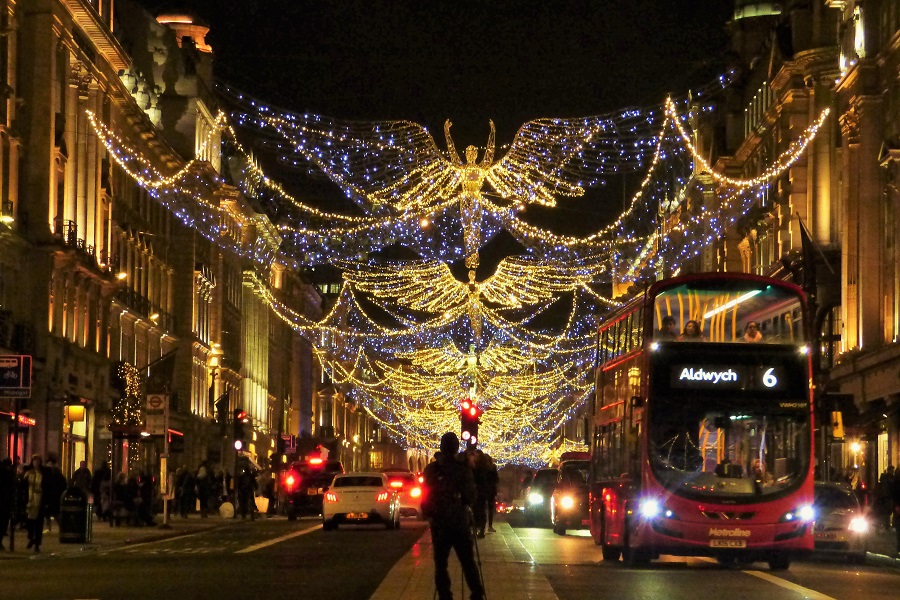 I love that Carnaby Street retains the flavour of its ‘Swinging London’ heyday Over the years it has featured everything from neon peacenik signs to recent nods towards the climate crisis, but the crowds on the street remind us that we’re in a 21st-century, pre-Christmas retail flurry. The next few years will see more decorations made from recycled and recyclable materials, with better use of energy and while more could be done (without the bah-humbugness of getting rid of them altogether), I’m glad to see some effort being applied. 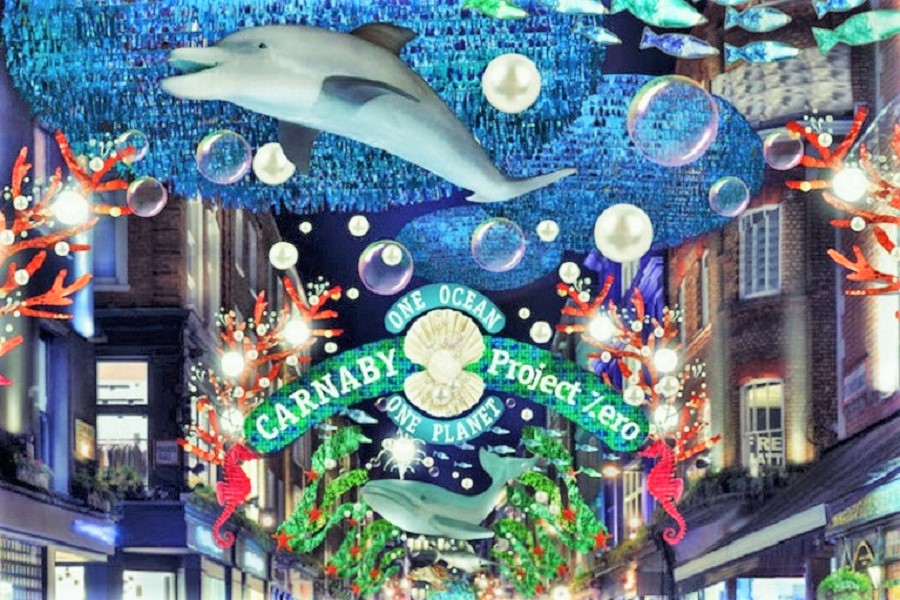 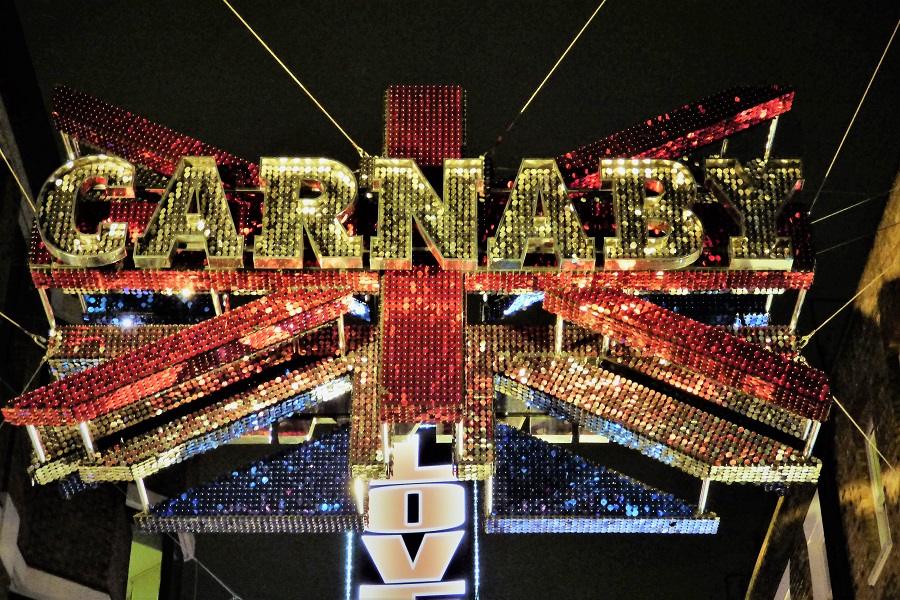 Just off Carnaby Street, we found an inner world of gastronomic delights in the shape of Kingly Court. It’s a lively complex of eateries laid out across 3 levels, all surrounding an open courtyard. We’ve run out of time tonight, so this is one to come back to and explore. 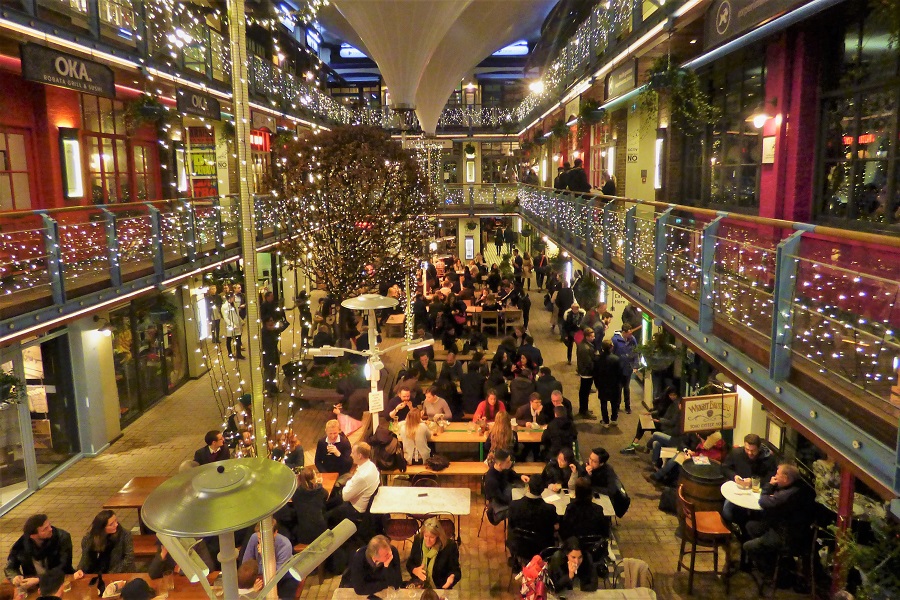 Maybe it’s because I’m not a Londoner anymore, but I find myself wanting to come back sooner rather than later. 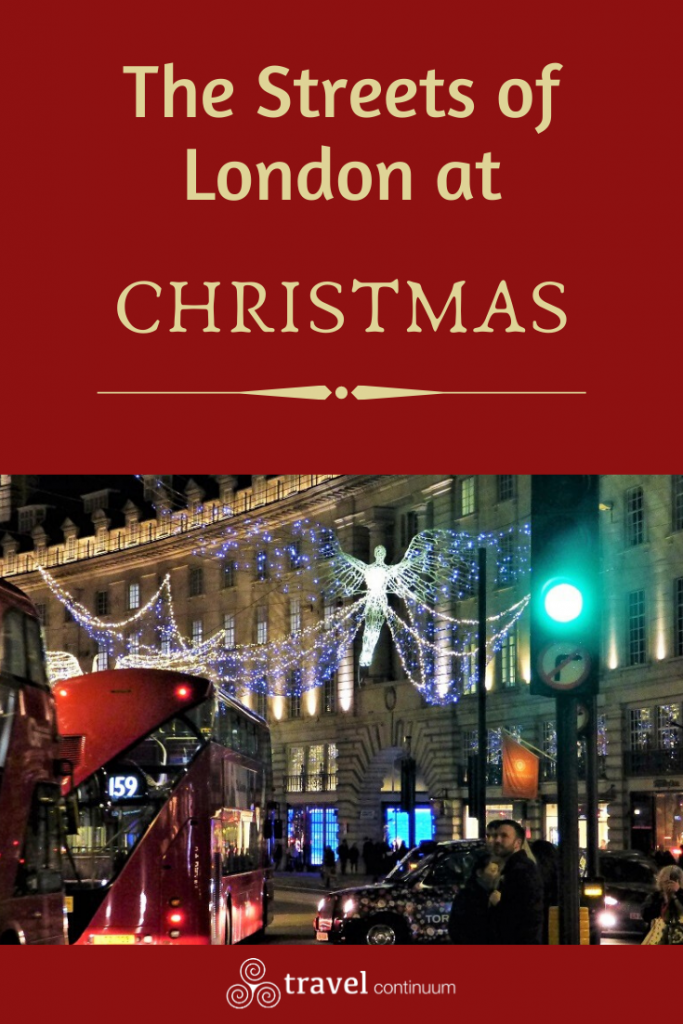