With the gold and russet dunes folding into each other in the distance, I stepped straight out onto the arid Martian landscape. Or so it seemed. If it wasn’t for the bold blue of our earthly sky, I could have sworn I’d just set foot on our neighbouring planet. That, and the fact I wasn’t wearing a spacesuit or breathing apparatus! It certainly wasn’t the panorama I was expecting to be met by when I booked the tour.

The truth is, we hadn’t looked into it too much.

We were on our way to Arequipa from northern Peru, via Lima, and had originally considered an aerial trip over the famous Nazca Lines – the mysterious giant figures etched into the landscape a little further south. But with several months of an epic South American adventure still to budget for, the cost of the flight was a dealbreaker. Our compromise was to stop off at Paracas, 250km south of the capital, Lima. There were a couple of places of ecological interest –  islands with bird colonies and stuff, and some National Reserve or other. It looked reasonably diverting. It turned out to be a revelation.

Established in 1975, Paracas National Reserve is the oldest marine reserve in Peru. It consists of a peninsula of subtropical coastal desert and its adjacent ocean waters, to the tune of around 3,350 square kilometres. It serves the dual purpose of not only protecting the great biological diversity within its boundaries but also the 100 or so archaeological sites from the pre-Incan Paracas culture, found among its scorched plains.

It stands out as much for its ethereal landscapes as for the variety of ocean creatures which inhabit its offshore reaches, as we were about to discover…

Our tour begins on the outskirts of Paracas town itself, at the San Martin Obelisk, named after José de San Martín, whose military campaigns formed part of the Latin American independence revolution of the 1800s. On September 8th 1820 San Martin and his army landed on the beach of Paracas, pushing back the incumbent Royalist Army and setting in motion the events that would lead to the liberation of Peru. Legend has it that one afternoon in Paracas, while resting against a palm tree, San Martin awoke from a dream to find several flamingos in flight around him.

It is said that their vermillion wings and white chest plumage inspired him to suggest the design of the Peruvian flag.

As we proceed to the Reserve, our dusty little coastal town rapidly gives way to big skies and alienesque vistas. I was expecting a verdant oasis of sorts, or a secret jungle of twisted vines and glossy foliage. Instead, Mars’ twin.

Bronze and slate hues emerge, and begin to blend into the predominantly golden tones, reminding me of Martian images sent back by the Viking 2 probe in the 1970s – but the texture of the landscape here is smoother. The forces of erosion on Earth are much stronger than on Mars, and in the Paracas desert most rocks have long since been whittled away to sand grains. A brief stop allows us to stretch our legs and take in the wide panorama. There’s barely any rainfall on the desert peninsula itself, and therefore precious little vegetation. There are a few herbs here, a smattering of lichens there, but that’s it, because despite the thriving marine ecosystem surrounding it, it’s a harsh environment. Now that we’ve got a real visual sense of one part of the ecosystem, our next port of call is the modest information building, the Centro de Interpretación.  Mixing scientific facts with thought-provoking quotes in beautifully put-together displays, we learn more about the region’s biodiversity and the work being done to conserve the environment.

Did you know, for example, that otters are the only marine mammals without a layer of fat under the skin to help them maintain their body heat? To make up for this, they have a second layer of very short, compact hair underneath their fur. This layer traps air and insulates them from the cold.

We shuffle back into the vehicle and head to the coast. Our destination is one of the key highlights of the tour – a striking viewpoint over the former La Catedral rock formation and the surrounding coastline. There’s a 5-minute walk from the parking point to the ocean front, along a marked path. We’re rewarded with a dazzling meeting of distinct geological ecosystems, where imposing rock strata and arid sands meet their match in the surging Pacific Ocean. The ages of time show themselves in the layers, among the cliffs of Paracas National Reserve.

There are other places (Namibia comes to mind) where desert dunes face-off against the encroaching deep blue seas, but with its towering cliffs, guano-laden islands and uncommon colour palette, Paracas offers a rare geological combination of features.

The scenery is simply stunning to behold, and striking in its unexpectedness. The former ‘La Catedral’ rock formation. In 2007, the arch of this structure was destroyed by an earthquake.

It’s a breathtaking view, and literally too, because my goodness, it’s windy here. Scraping gusts sandblast your skin, hairstyles are beaten into submission and camera lens caps flap about chaotically on their cords. Fittingly, in the Quechua language, paracas means ‘raining sands’. The region sits in the path of the Humboldt Current, resulting in deep ocean nutrients being swept up towards the surface by a process called upwelling. It makes for an incredible abundance of marine life, which includes mammals such as whales, sea lions and sea otters and orcas. There are 3 types of turtles, namely leatherback, green and hawksbill, and over 200 species of migratory birds spend at least part of their lives in the Reserve, including Humboldt penguins, American Flamingos, Peruvian diving petrels and both blue-footed and masked boobies.

Among the 150-plus fish species are anchovy, sardine, hake, various types of dogfish, as well as other assorted marine creatures such as crabs and octopuses. Steady yourself against the hurried winds and enjoy the majesty before you.

Planet of the Japes

On a random tangent, our guide tells us an unexpected anecdote about the area. Remember that twist at the end of the original Planet of the Apes film? **Spoiler Alert** When Charlton Heston’s ‘Taylor’ sees the half-submerged Statue of Liberty and realises he’s on Earth after all?

The guide explains to us that the stretch of coastline we’re looking at was the filming location for that final scene.

Only it wasn’t. He was playing a little joke on us. But I only found out for sure when I looked it up later on.

There’s another scenic stop at Playa Roja (the Red Beach), where locals gather seaweed for harvesting, and we’re met by the disconcerting sight of some dead seals washed ashore. Apparently, this does happen occasionally, but I’ve never got to the bottom of why. It’s possibly due to nothing more than natural causes, the numbers being higher than average because of the sheer concentration of marine life in the region. A stroll above the Playa Roja, unfortunately dotted with several sea lion carcasses. Red and yellow sands contrast with the blue waters and white spray of the ocean at Playa Roja, as seaweed harvesters gather their crop.

The rich russet colour of the Playa Roja arrives via the ocean currents, from a nearby igneous rock formation consisting of a substance called pink granodiorite. Waves crashing against the cliffs pick up fragments of this substance and carry them onto the shore, where they settle in beautiful contrast against the ochre and gold of the surrounding sands. 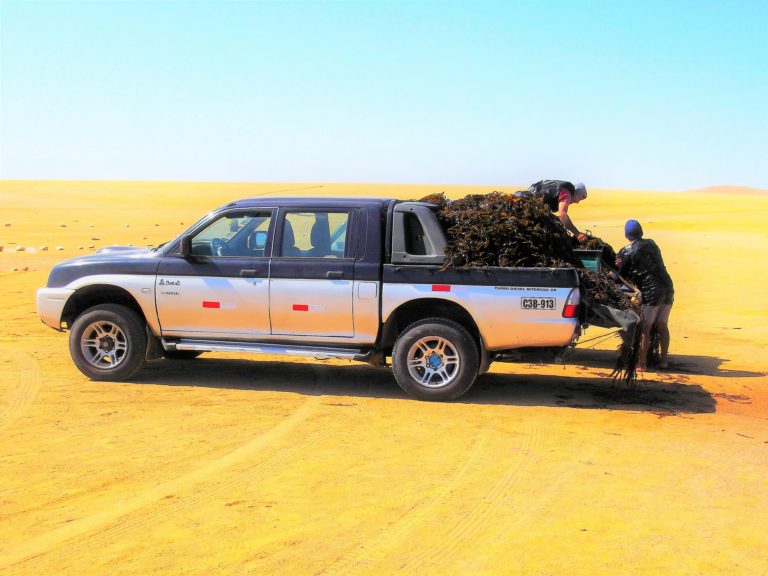 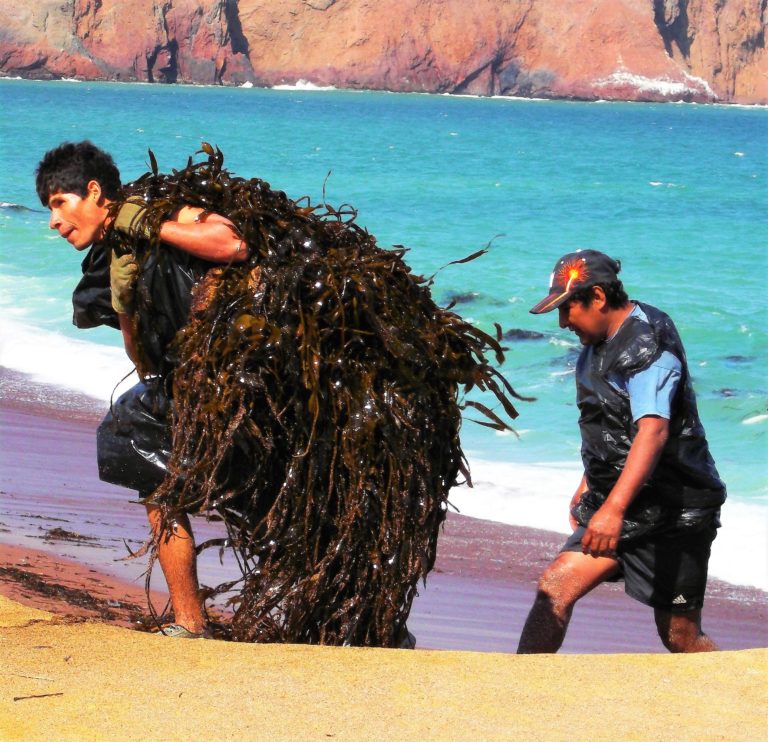 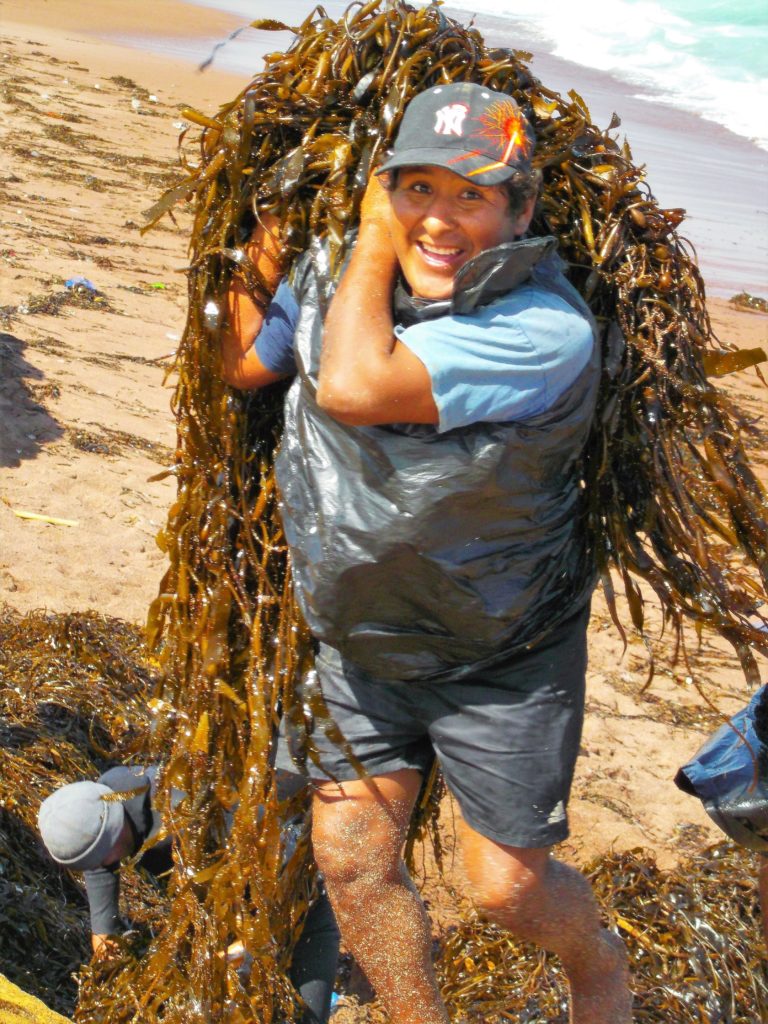 Above: The seaweed gathered by local traders has a range of uses, e.g. an ingredient for cosmetics or an adornment for ceviche (a popular dish in latin america where raw fish is cured in citrus juice)

Our tour ends at the picturesque Lagunillas Bay, where small boats bob along the shallower waters surrounding a series of craggy outcrops. A small selection of restaurants offer simple menus, but the lasting impressions are of beautiful views across the rocky coves and pelicans hustling for food scraps at back doors. Playa Lagunillas at the conculsion of our tour…and finally, a little bit of greenery.

Around Lagunillas Bay, where you can eat, rest and marvel at the sights you’ve seen – whilst giving those peckish pelicans a wide berth (see below) 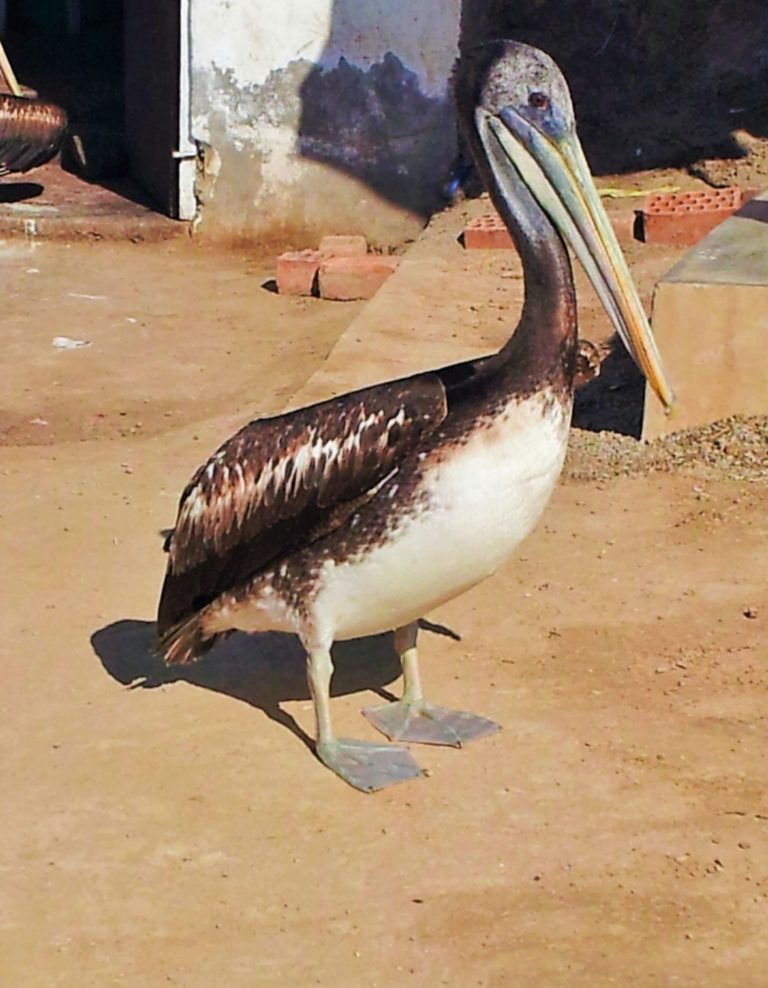 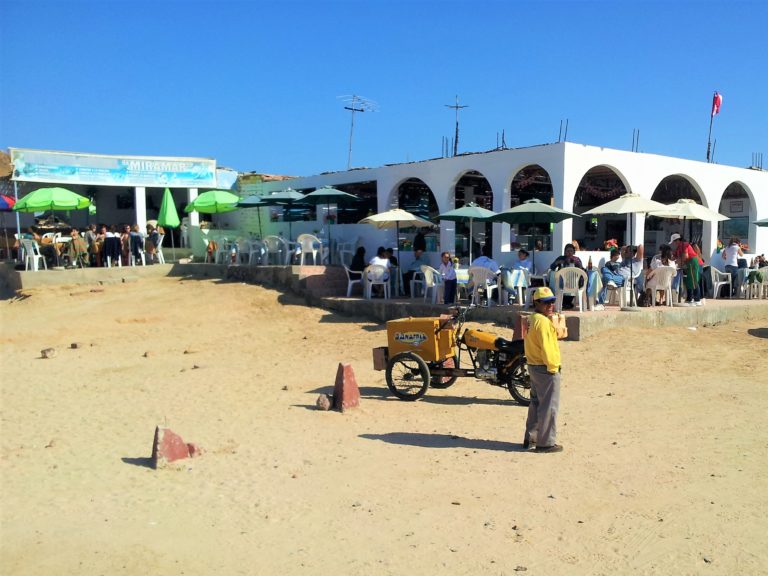 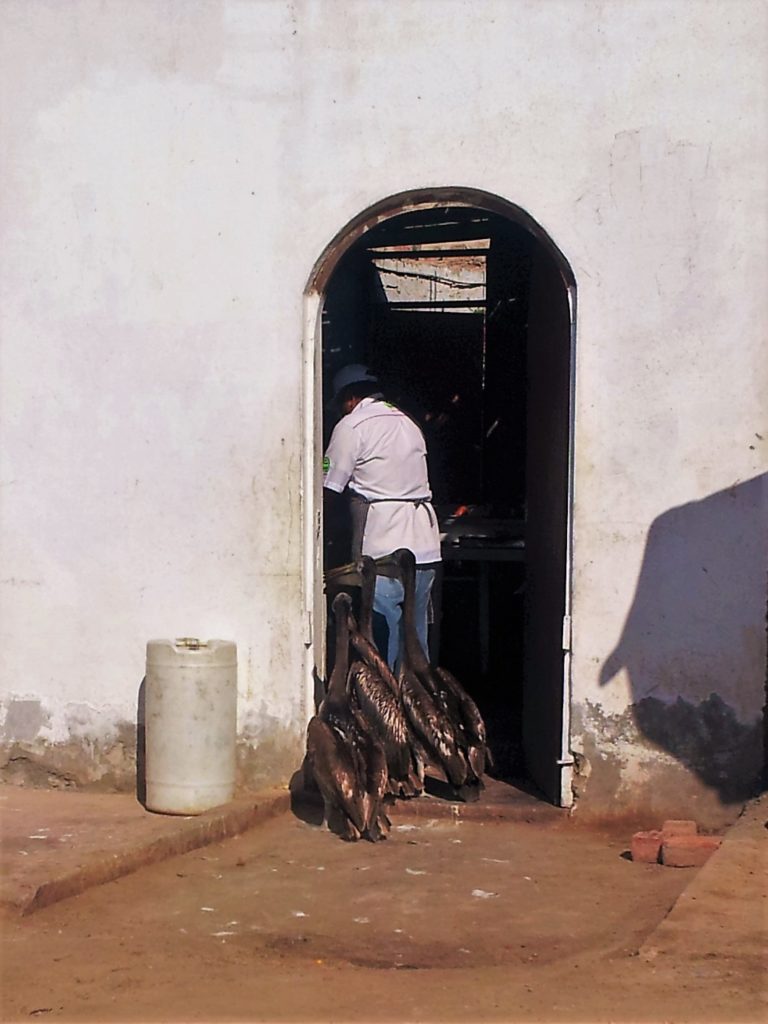 We head back into town, leaving the dramatic dunes, feisty winds and teeming oceans of Paracas National Reserve behind us.

Getting to Paracas: Most bus/coach companies from either direction (usually Lima or Arequipa) will stop at Pisco (or sometimes along the highway if Pisco isn’t a designated stop). From there, a taxi can take you to Paracas for about S/.20 ($6.20 / £4.95). (S/. = Peruvian Sol)

We stayed at: Paracas Backpackers’ House, Avenida Las Libertadores. It’s very well located in the middle of the main street through town. The sea front is a couple of minutes’ walk away. We shared a twin, which was comfortable enough. At the time it was undergoing renovation, and the showers and kitchen were very basic but I recently checked their website and it has undergone quite some transformation! It looks fresh, bright and welcoming, with excellent facilities. Prices start at S/.20 pp ($6.50 / £4.95) for a 10-bed shared dorm.

Our Tour: There are various companies offering guided tours to the Islas Ballestas and Paracas National Reserve. We booked through the hostel for simplicity and were happy enough with the value for money. As with most of these things in South America, you pretty much get what you pay for. The owners Lidia and Alberto have strong and established contact with approved local tour agencies. In all cases, always check whether the tour price includes the entrance fee to the Reserve itself. You can expect to pay between S/.25-35 per person for a 4hr tour including entrance ($7.70-$10.80 / £6.20-£8.60)

Alternatives: Do you need a guided tour for Paracas National Reserve? The peninsula itself is around 15km across at the widest point, so it’s not huge…BUT…the terrain is harsh and unforgiving and any solo/unguided trips merit careful planning.

You can hire a bicycle in town from S/.35 per day ($10.80 / £8.60). You’re looking at between 25-30km for the round trip, so check the roadworthiness of hired bicycles beforehand. Take plenty of sunscreen and water with you, and let someone know where you’re going and approximately when you expect to return.

Food and Drink: Paracas has quite a few straightforward eateries and cafes, and at various times and places you can find some cheap and tasty street food too. Disclosure: My visit to Paracas National Reserve was part of an extended period of travel in South America. Thanks to Alberto from Paracas Backpackers’ House for arranging our tours during our stay.