The wide and sweeping Plaza Mayor, the central square of Salamanca. Photo from imagea.org

As you approach by road, the ancient city of Salamanca rises up majestically from the dusty plains of Castilla y Leon province in Spain, but it’s deep in the heart of the city centre that one of its most intriguing features waits to be discovered…..

Tucked away north-west of Madrid, the city is steeped in culture and history, but is equally famed today for its thriving student scene, borne in part from the legacy of its 12th century University – the oldest in Spain.

We’ve been staying in a traditional B&B, situated right on the Plaza Mayor, the city’s impressive central square, with its ornate buildings and a plethora of galleries, arcades & cafes. From our juliette balcony we’ve observed the geeky, the trendy and the well-heeled going about their business, day and night. People-watching doesn’t get much better. The sandstone arches of the Plaza Mayor. Image by Manuel.

Getting to Know You

But I’m not here on holiday – my colleague and I have spent several very hectic days whizzing around the provinces of Castilla y León and Extremadura on a work familiarisation trip (or just ‘fam trip’, because life is short). This is our one afternoon off. She has gone off to do her thing, and me, mine.

I’m in the Old Quarter, a UNESCO World Heritage Site, awash with architectural monuments from a wide range of sources; from Romanesque, through Gothic, Moorish and Renaissance to Baroque influences.

I’m waiting for my colleague at Salamanca’s New Cathedral, by the lateral doorway as arranged. The Cathedral isn’t all that new (completed in the 18th century), but it’s certainly striking, as is the rest of the architecture. Waiting isn’t my forte, and to while away the time I turn around to look at the intricate carvings on the doorway’s façade. And there among the gargoyles, vines and assorted fauna, an impossible feature jumps out at me.

An astronaut. Fully kitted out in stony spacesuit and breathing apparatus.

What the great cosmic capers is this?!?

I glance around furtively. Is anyone else looking? Have I unwittingly become the victim of a Spanish version of You’ve Been Framed?

Or, could this finally be proof that author Erich Von Daniken, in his contentious book Chariots of the Gods, was right in his hypothesis that ancient astronauts had visited some of our early civilisations? 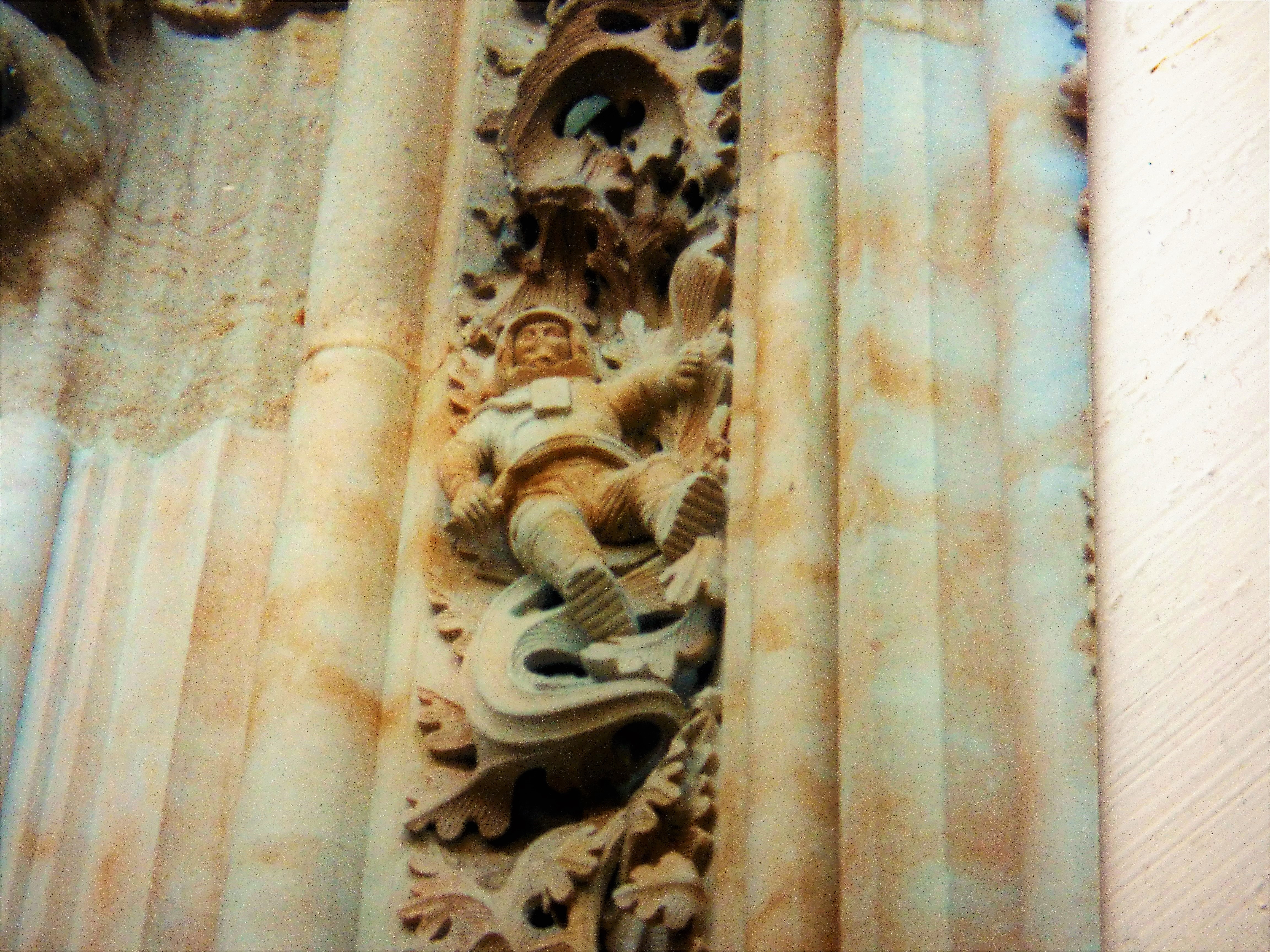 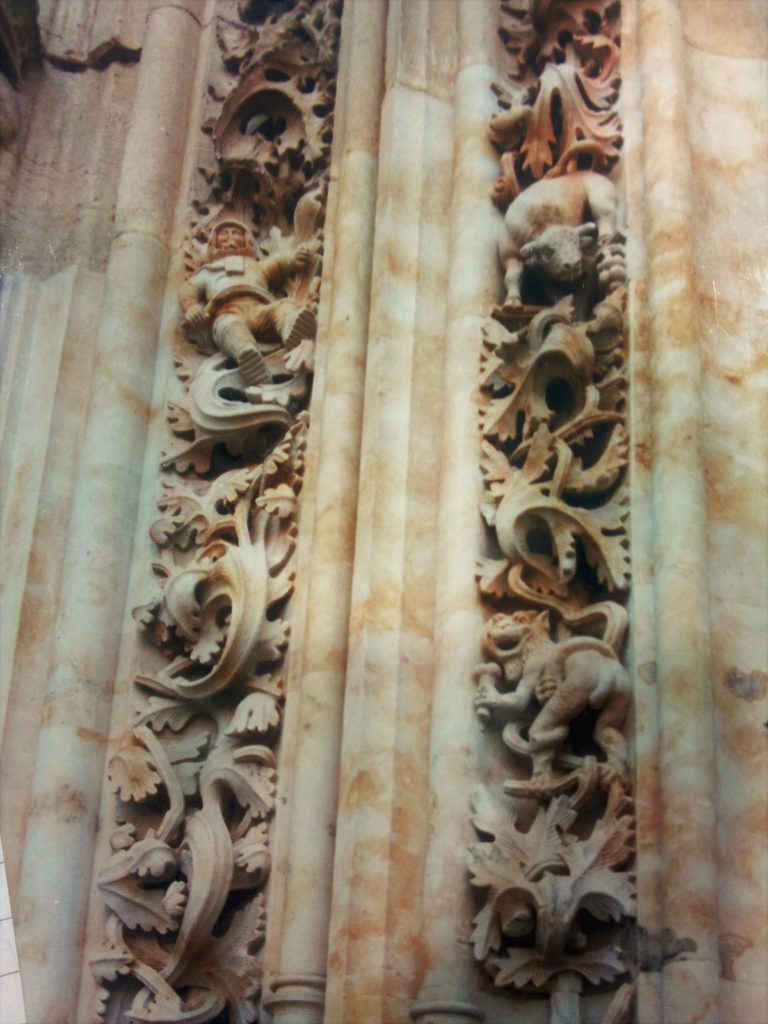 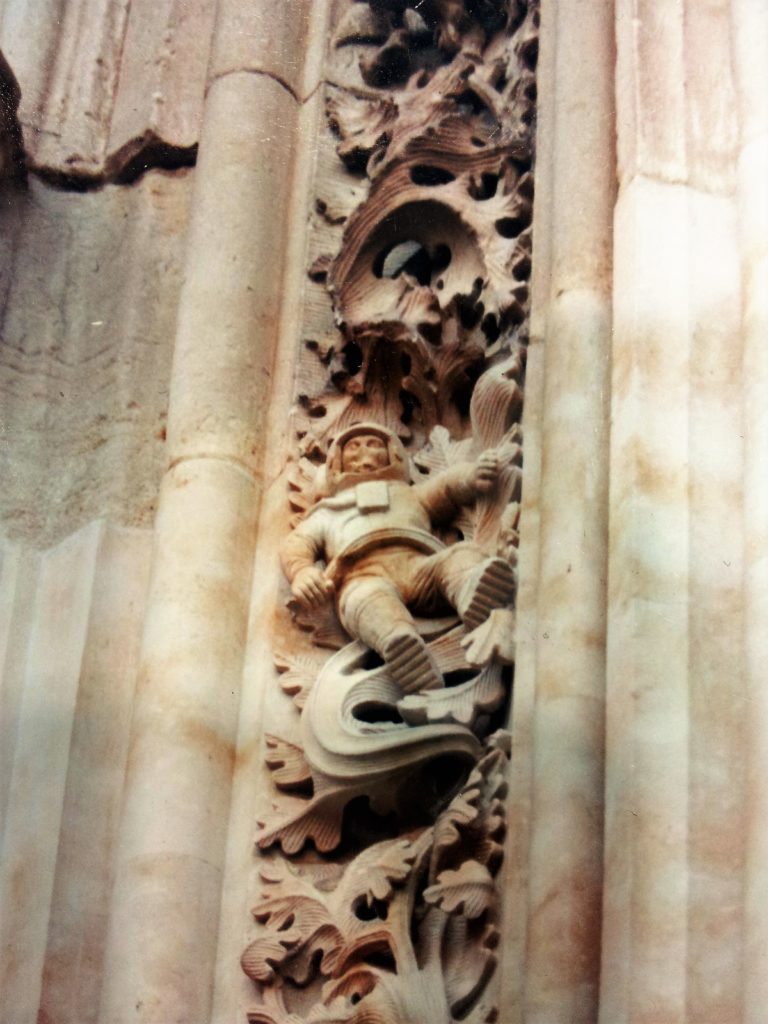 The truth, as I subsequently discover, is far less outlandish.

Cathedral builders and restorers often add details or new carvings to a building by way of a signature. During the Cathedral’s last restoration in 1992, in keeping with tradition, one of the quarrymen was given permission to add a slightly more modern figure, as a symbol of the changing times. Hence our enigmatic astronaut came into being.

On that day, though, I remained oblivious to the rather prosaic origin of the carving. In due course, my colleague turned up and I showed her the object of puzzlement. As we finished our afternoon’s exploration bathed in Salamanca’s golden aura we questioned our perception and pondered all manner of conspiracy theories.

I wonder if the restorer has any idea of the number of perplexed expressions he is responsible for?!

As much as I love discovering a place’s history, a little mystery often adds a fascinating dimension (think Britain’s King Arthur or the Nazca Lines of Peru), and admittedly I sometimes wish I hadn’t found out the truth behind our curious little figure.

Especially at Christmas, as the radio plays ‘A Spaceman Came Travelling……….’ Getting to Salamanca is easy enough in many ways, although not so straightforward if you want to fly in from the UK.

By Car: The A-50 road takes you to and from Madrid (212km away), while other Spanish towns such as Gijón, Zamora, Cáceres and Mérida can be accessed on the A-66. You can get to Salamanca from Portugal in a few hours on the A-62 motorway.

By Air: Salamanca airport is located 15km east of the city and can be reached by bus (€3 ) or taxi, and offers charter and scheduled flights are different times of the year. The closest international airport is Valladolid, less than an hour and a half away. For more international destinations, the best option is to use Barajas airport in Madrid.

By Train: There are direct trains to/from Madrid, Ávila, San Sebastián, Bilbao and Barcelona, amongst others. There are also direct services to Portugal, and there are connections to other international destinations using the Irún-Hendaya line. A Renfe Spain Pass allows non-residents to travel around Spain by train. A pass is valid for one month and can be purchased up to six months in advance, and is available for 4, 6, 8, 10 or 12 journeys.

By Coach: You can take a coach to many major cities such as Madrid, Barcelona, Seville, Zaragoza and Santander. The bus station is located at Avenida Filiberto Villalobos, 71-85, 37007  Salamanca ,  close to the historic centre (currently no English translation on website).