For a city saturated with graffiti at almost every turn, it’s hard to imagine how any one section of Berlin’s urban art canvasses could stand out.

But here, along a 1.3km riverside stretch at Mühlenstraße, a generation’s hopes, dreams and frustrations lie splattered poignantly across the longest remaining segment of the Berlin Wall.

The East Side Gallery is the most striking legacy of the events leading up to, and including the breaking down of the most enduring symbol of the Cold War, a quarter of a century ago. With paintings by over 100 international artists showcased across it, it serves as a global memorial to the spirit of resilience borne by those who lived through those times. 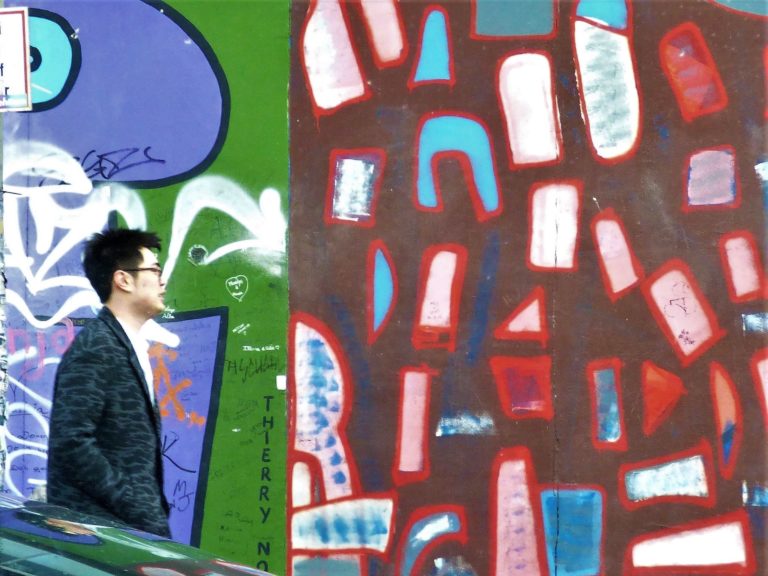 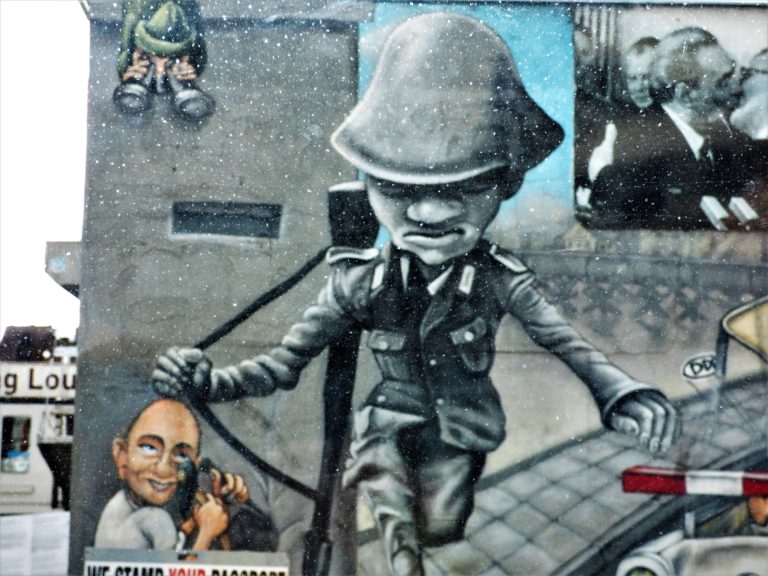 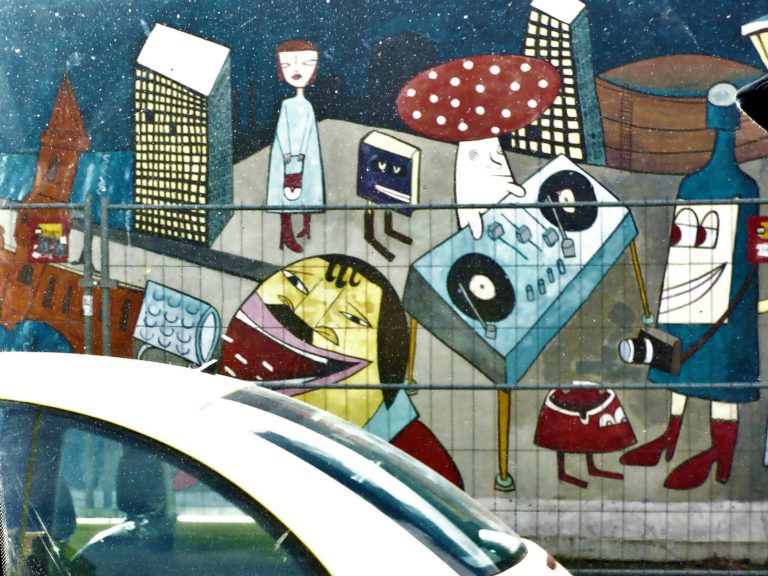 It’s the longest open air gallery in the world, and just over three and a half metres in height. I’d imagined it to be taller, not by much necessarily, but by enough to make it seem more imposing than it does. Perhaps knowing it’s not a real barrier anymore makes it seems more benign…

Over the years, most of the original pieces have been vandalised – or ‘updated’, depending on how you look at it. After all, graffiti itself is often still seen as a form of vandalism.

These additions usually take the form of tags (personal signatures) or slogans, and often depict even more contemporary issues of our times.

In the example below, the painting by Ines Bayer entitled “Es gilt viele Mauern abzubauen” (it is necessary to break down many walls), has a modern and cynical new component. A comment about someone who wants to build a wall, written on a painting of a wall, on a wall which was mostly torn down 25 years ago. Gotta love it.

As we passed by, I smiled and shuddered simultaneously. The message within the messages is clear to me…

‘The more things change, the more they stay the same’ – Jean-Baptiste Alphonse Karr

A short distance further along, a less prominent addition refers to a recent British leader. Amid the multiple tags and scribblings, someone pays homage to a former British Prime Minister.

‘There you go’, I say to my fellow passenger Andrew, a genial American ‘David Cameron is clearly not as important as Donald Trump’.

‘Nowhere near as dangerous, either’ comes the reply.

Further along, some of the estimated 800,000 annual visitors stop to muse at the famous socialist fraternal kiss between Leonid Brezhnev and Erich Honecker, portrayed in Dmitri Vrubel’s painting ‘My God, Help Me to Survive this Deadly Love’.

The socialist fraternal kiss is a special greeting between Communist statesmen. It has different versions, depending on the level of friendship between the socialist leaders. Only those who were particularly close would kiss on the mouth. Honecker and Brezhnev were famously photographed during such an embrace, and the image was depicted by Vrubel in his painting. Our guide Thilo, a former child of East Berlin, points out the sheen on some of the exhibits, showing where the original artwork has been cleaned. The random scribbles peppering the gallery are removed safely and without damaging the originals. Wire mesh and other barricades are frequently erected in a futile attempt to prevent access and further spoilage.

Erosion has also played a part in causing damage, so restoration work is regularly carried out, although not always by the original artists, or with their permission. The Gallery has, in fact, been renovated several times over the last 25 years, as government funds are invested in protecting this cultural monument.

The biggest challenge to its continued existence though, is that of developers. East-side development, with pros and cons – the Mercedes-Benz Arena. Photo by Pascal Volk The Material Girl bringing material benefits to the former East Berlin, at the Mercedes-Benz Arena. Photo by Chrisweger.

‘New’ Berlin nudges at the seams of the Gallery, pushing its economic growth agenda against the heritage mural. Towering luxury accommodation has already been built, and with units selling for 15-20K Euro per square metre, it’s little wonder developers are eager to invest further.

The huge indoor Mercedes-Benz Arena is another sign of the times, bringing modern facilities and job creation into the mix. Both structures resulted in removal of sections of the wall. Even David Hasselhoff’s presence at protest rallies couldn’t stand in the way of progress.

As commercial forces continue to vie with cultural considerations, the Gallery’s long-term future remains in limbo. No pun intended, but I can see both sides of the debate. Viewed through a gap in the Gallery, the Floating Lounge barge, bookable for parties and corporate events, sits moored on the River Spree close to the Oberbaum Bridge.

A visit to the Gallery could be considered a form of ‘dark tourism’, for its association with oppression and a fearful regime. In which case, it’s the brightest example imaginable, shining with vibrant paintings and illuminated by an innate sense of hope and possibility.

It’s imperfect as a work of art, but that’s part of the charm. For the time being at least, it continues to tell its unique East Side story. Disclosure: Berlin is open-minded, down-to-earth and unpretentious. For the record, I found the graffiti oddly uplifting. I felt I was walking about inside a book in progress, where upbeat new chapters are  being written but the legacy of past events is never forgotten. Thanks to Thilo of Berlin Music Tours for his time and endless knowledge.