The Changing Face (Book) of Travel

I remember watching it the first time around. It was romantic, exotic and steeped with inspiration and possibilities. Those were the days when I’d respond to daytime TV competitions to try and win a paid-for holiday and travel writing opportunity.

It’s just under 25 years ago but feels as if it marked the end of an era. An era started and characterized by the wanderlust and zeal for the natural world that Victorian explorers possessed by the bucketload.

A daft interpretation of Victorian derring-do! Boys In Canoes, picture courtesy of Lavidastupida

The Trials of Travel Past

A time when nobody knew exactly where you were at any given moment because there was no way of informing them. A time when you spent an entire day just getting to a locutorio/phone shop and finding a post office to send your postcards or completed travel journals.

Believe it or not, I’m a very progressive, forward-thinking person. For the most part. I know full well that the work I do now pivots almost exclusively on modern technology.

The digital age brings instant contact, potentially huge audiences, multiple outlets and the most liberating flexibility to work on-the-go. I’m thankful for that and the communication-age nomadism it affords.

‘Om’……..no internet connection (yet) on the Salar de Uyuni, Bolivia

So is it wrong that I occasionally get pangs of disappointment knowing that I’m never far from an internet connection, unless I’m accompanying explorer Levison Wood on his latest expedition as he attempts to cross Panama’s Darien Gap?

I’m not joining him, by the way. I told him that extreme walking wasn’t my thing.

The point is that I have a love/hate relationship with social media in particular, and the frenzy of skim-reading, click-baiting instant gratification that comes with it.

Turn on, tune in, drop out?

Travel niches such as immersion tourism and astrotourism are developing all the time, and they’re becoming popular because of what they encapsulate: an opportunity to taste an unfamiliar way of life; to absorb a new culture; to gaze at the stars and merge into the cosmos. To just be.

But sooner or later (within 24hrs max, probably), that modern itch of wanting to share a photo on Instagram will take over. When your mobile phone is so much more than just a phone, that itch is easily scratched.

Ultimately, while I rue some of what we’ve lost in the sense of mystique, I embrace what we’ve gained. The digital age has brought us more information than we can even process right now. Knowledge is a wonderful thing, and we have an unprecedented capacity to share and learn about the world and the people in it.

Which to me, when I think about it, is what travel has always been about.

Horses and the Badlands, no internet – in Tuipiza, Bolivia

Disclosure: Thanks to Esther Vargas, Wikipedia and Sakeeb Sabakka for supporting images. 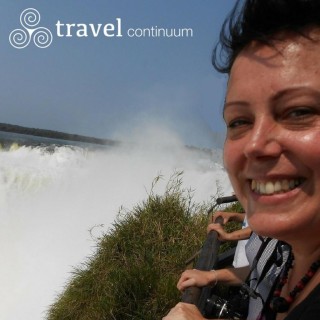 Hello, I'm Sara, a long-time travel industry professional and writer. A 'continuum' is something that changes in character over time - and Travel Continuum is no exception, especially given recent circumstances. As J.R.R. Tolkien said... 'still round the corner there may wait, a new road or a secret gate'