Solarsphere Astronomical and Music Festival – A Niche Festival For All

A niche festival for all. Hear me out though, I promise it makes perfect sense. I’m on the outskirts of the ancient market town of Builth Wells in Powys, Wales. It’s the middle of August, and we’re heading towards the end of the festival season…..

So almost by definition, it’s mainly overcast and a little bit soggy. Does this matter to the folks here at the 2nd annual Solarsphere Astronomical and Music Festival?

Not a jot, as it happens. Festival-goers are by nature a resilient species, but this is an especially hardy lot. Conditioned over years of experience to manage their meteorological expectations, these UK astronomy enthusiasts have a diehard, all-weather badass attitude. Overcast and a little bit soggy? Pah! We’re used to it!

I’m here to catch up with a friend, who happens to be one of this year’s speakers. Reunion aside, I’ve made the 5-hour journey from the south coast for two reasons: I love music and I love astronomy.

Having said that, I have sometimes felt a tad weary at major events such as Glastonbury Festival, as I prepare for another calf-aching slog through mud pits. Or frustrated at not being able to see every band I’d like because I can’t be in 4 places at once.

So this blossoming small-scale festival in a quaint little corner of Wales caught my interest as soon as I became aware of it. The question is – does it have broad appeal? I believe so. A festival for all reasons

In a short timeframe, Solarsphere has flourished into something warmly welcoming. With a devoted group of family, friends and other volunteers all contributing, the commitment is clear to see. Pete Williamson (astronomer, broadcaster and rockin’ musician) works relentlessly all year round with daughter Sarah to create this event, while Syb (Pete’s wife/Sarah’s mum) also part of the team, does a stirling job running the ticket office.

The capacity is around 350 and they want to keep it that way; intimate and friendly – with all the co-founders/organisers on-hand during the entire festival to ensure the experience is the best it can be.

It’s not that there aren’t other UK star parties or space camps in the offing – there are several. But many of them are straight down-the-line, no frills astronomy events, with little to engage the cosmically unconverted.

At the other end of the spectrum, you have the spectacular 11-day annual Manchester Science Festival, which sounds fascinating if potentially overwhelming. And that’s why Solarsphere stands out. With a full bill of astronomy talks, an eclectic soundscape of musical artists, kids’ activities to keep your little space cadets engaged, and some serious chortling thrown in by way of comedy slots, there’s …. how else can I put it? ….. something for everyone, all concentrated around a central hub and within 5 minutes’ walk.

So what exactly was on offer this time around?

The varied programme featured photography, the history of the constellations, the Northern Lights and the existence (or not) of alien life.

One of my favourite talks was by Will Gater, whose vast knowledge of the Northern Lights lit up the faces of the audience. Who knew you could photograph the shimmering green, orange (and even purple) hues of the Aurora Borealis as far south as Somerset – and possibly beyond?

(Pssst….I did, but only because I once saw the Northern Lights by the south coast) Dr Megan Argo talks about ‘Supernovae: Things That Go Bang in the Night’

Every taste and level is catered for. Beginners taking one small step into the world of astronomical learning were treated to Mark Townley’s talk on ‘Our Local Star’ and Ninian Boyle’s look at ‘The Moon Anew’, while Dr. Megan Argo was exuberantly out there with her tales and theories about ‘Supernova Explosions’.

I love Megan Argo – she reminds me of the character Ellie Arroway from the film Contact. I fervently hope that’s not an insult to this real-world scientist.

The music is a blend of emerging acoustic and folk acts, seasoned rock ‘n’ blues, dance electronica and a smattering of psychedelic space prog (did I just make up a fusion music genre there?). Where else would you get shoegazing and stargazing in the same place? One of the bands, Hawklords, even featured a couple of former members of Hawkwind. C’mon……you remember Hawkwind? With Lemmy belting out ‘Silver Machine’, right?

Ah well, no matter – whether you’re a gentle toe-tapper or an energetic air-puncher, there’s something for you. And as if Pete Williamson didn’t have enough to do, he also finds time to get up on stage with his band Anubis and throw us some riffs and grooves. What Else to See and Do

Throughout the 3 days there were engaging hands-on workshops, interactive games, mobile planetarium shows, Q & A sessions with the experts, stalls to browse and a fancy dress party on the Friday to get things off to a stellar start. Of course, there were scheduled observing sessions too – which this time resulted in just a few brief glimpses of the skies, thanks to those pesky weather gods.

There’s food on-site. Not the fancy falafel wraps or noodles-a-nom-nom you’ll find at many festivals, but your in-house, standard trucker’s café fodder, a la ‘chips with everything’. Filling enough, if not bursting with nutrients!

But it IS a festival after all, so for the happy campers, bringing your own food is another way to go. For those (like me) who turn up without the equipment or inclination to go all Ray Mears, there is a 3rd choice: Builth Wells itself – a pretty market town with a lovely community feel and several eateries and coffee houses to explore. Don’t miss out on the festival events, mind! Above and below: The quirky arts and crafts of Solarsphere Below: My Dionysus Sundial pendant, by Ragalaxys, via the Society for Popular Astronomy stall. 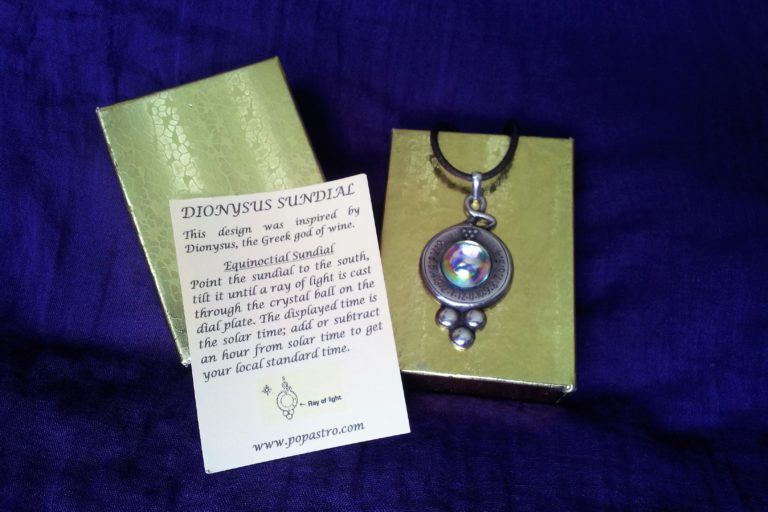 I was only able to stay for 24hrs, but talks aside, I managed to pack quite a few other highlights to take away with me – these are my top 3.

I was inspired by:

Meeting Dr Mandy Bailey (representing the Society for Popular Astronomy) and chatting to her about following your dreams. After a career in less-heavenly sectors, she bit the bullet and enrolled in an Open University course. Despite being a single mum and holding down several jobs, she achieved a degree in Natural Sciences (physics) in 2008, and went on to attain her PhD from Keele University in 2014. What a role model!

I was amused by:

The obsessed character in the audience at Will Gater’s ‘Aurora’ talk, whose only (and oft-repeated) question to the speaker was ‘Do you believe in aliens?’ Eventually, another audience member stepped in to the rescue with an on-topic question. There’s always one, as they say.

I was impressed by:

Cosmos Planetarium – set up by experienced astronomy enthusiasts James Green and Steven Gray, this mobile planetarium experience brings the universe to you in multi-media format. Its purpose is to entertain and educate those who wouldn’t otherwise get a similar opportunity – anything from school groups to care homes. Inside the Cosmos Planetarium – there’s a bit of a tardis effect going on here.

Festival fans, astrophiles, music fans, families, friends, and even colourful eccentrics can all find camaraderie, fun and education at Solarsphere.

And I’ll let you in on a little secret. If you still haven’t had your fill of the cosmos at the end of it, head north for 30 minutes, where you’ll find the Elan Valley Estate – the world’s first privately owned but publicly accessible International Dark Sky Park. 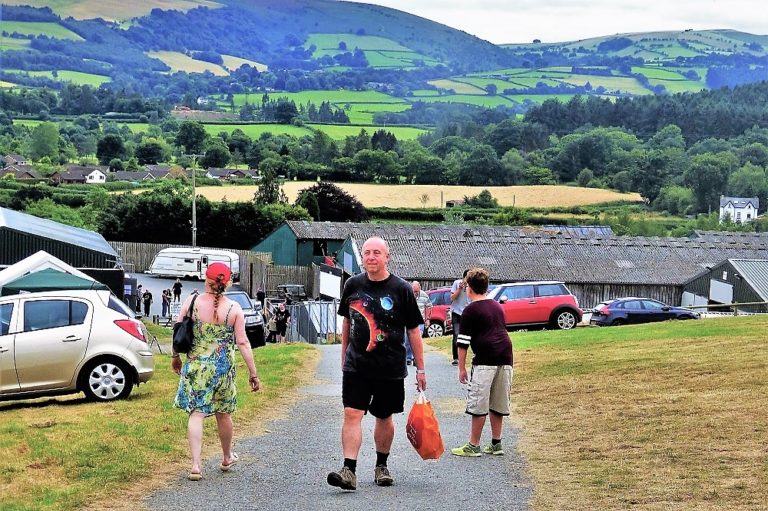 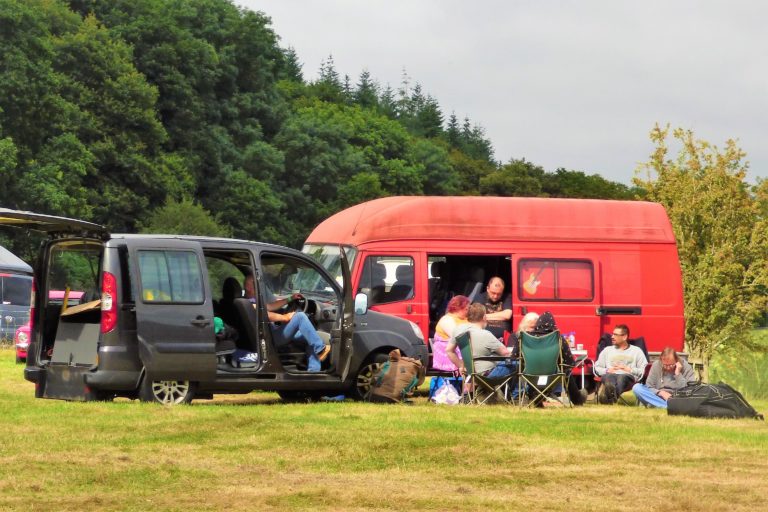 Before I left the campsite, I asked Pete what he would choose if he had to decide between astronomy and music.

I don’t remember the exact words he eventually summoned, but I’ll never forget the look of disbelief and torture at such a question, as if I’d asked him to choose between two of his children.

But of course, silly me –  it’s how the concept for this festival was born.

Why choose, when you can come to Solarsphere and have it all?

Where: Solarsphere takes place at Penmaenau Farm, located on the A470 about 2 miles out of Builth Wells in Powys, Wales, on the opposite side of the river to the town.

When: The festival usually takes place on the 2nd weekend in August – as close as possible to the peak activity period of the Perseid meteor shower between the 11th and 14th.

Cost: Full Weekend – £45 per adult, £20 for 13-17yr olds, 12yrs and under FREE. Day tickets are dependent on space and may only become available one week prior to the event.

Disclosure: Thanks to Professor Nigel Henbest for inviting me to attend and to Pete Williamson and family for their passion and dedication in making this event happen. For the record, I don’t actually know if Pete has more than one offspring!