Winter Folklore in the Netherlands | Sinterklaas and Zwarte Piet Sinterklaas is in town…photo courtesy of Michell Zappa

In the popular folklore of the Low Countries, one figure stands out as a divisive and controversial character. He is Zwarte Piet, the traditional companion of the mythical Sinterklaas (based on Saint Nicholas) during the festivities leading up to and including Saint Nicholas Day.

But who is he? And why does he cause such a stir?

The celebration that spawned the creation of Zwarte Piet centres around Saint Nicholas, a 4th century Christian saint and Greek bishop, who was known for his habit of secretly leaving gifts for those less fortunate, perhaps inspired by the story of the three wise men and their gifts of gold, frankincense and myrrh for the baby Jesus.

Over the centuries, tales of Saint Nicholas’ life have blended with the traditional Nativity chronicles to form the Western celebrations of Christmas most of us are familiar with today, with Santa Claus as one derivative figurehead of this revered holy man.

Another incarnation, Sinterklaas, remains popular in the Netherlands and many other parts of the former Holy Roman Empire. Here, Saint Nicholas Day falls on the 6thDecember. With a Little Help

Instead of elves, Sinterklaas’ ‘little helper’ is the aforementioned Zwarte Piet, whose role is mainly to distribute sweets and pepernoten (spiced biscuits) among the children and to keep them amused and entertained. I say ‘mainly’…because of course, a lot depends on the children’s behaviour throughout the year, and naughty youngsters may get no more than a dry twig or a piece of coal and a telling off as their present, if they so merit it.

But to all intents and purposes, the role is a charming and benevolent one from most perspectives. Except in recent times, the character has become the subject of much heated debate and discussion, even resulting in aggressive demonstrations during public festivals.

Zwarte Piet (literally ‘Black Pete’) typically appears as a black-faced individual, with a dark curly wig, red lipstick and often some gaudy earrings, and it’s these connotations of slavery or a caricaturised ‘exotic’ person which create discomfort for many people, akin to the effect of the now frowned-upon golliwog or minstrel figures. Zwarte Piet in Utrecht, 2016, only very slightly ‘blacked up’ – a sign of the times?

Why Piet looks the way he does is almost impossible to pin down. He didn’t even appear in the printed version of the Sinterklaas fable until the 1850 book Sint Nikolaas en zijn Knecht (“Saint Nicholas and his Servant”, written by Dutch teacher Jan Schenkman), but his typical clothing represents the dandy finery of late-Renaissance nobility, often with lace collar and feather cap. Although, if you ask me, there are traces of comic servant Harlequin (also 17th century) in his attire.

So something got a little mixed up along the way because the dates don’t match. 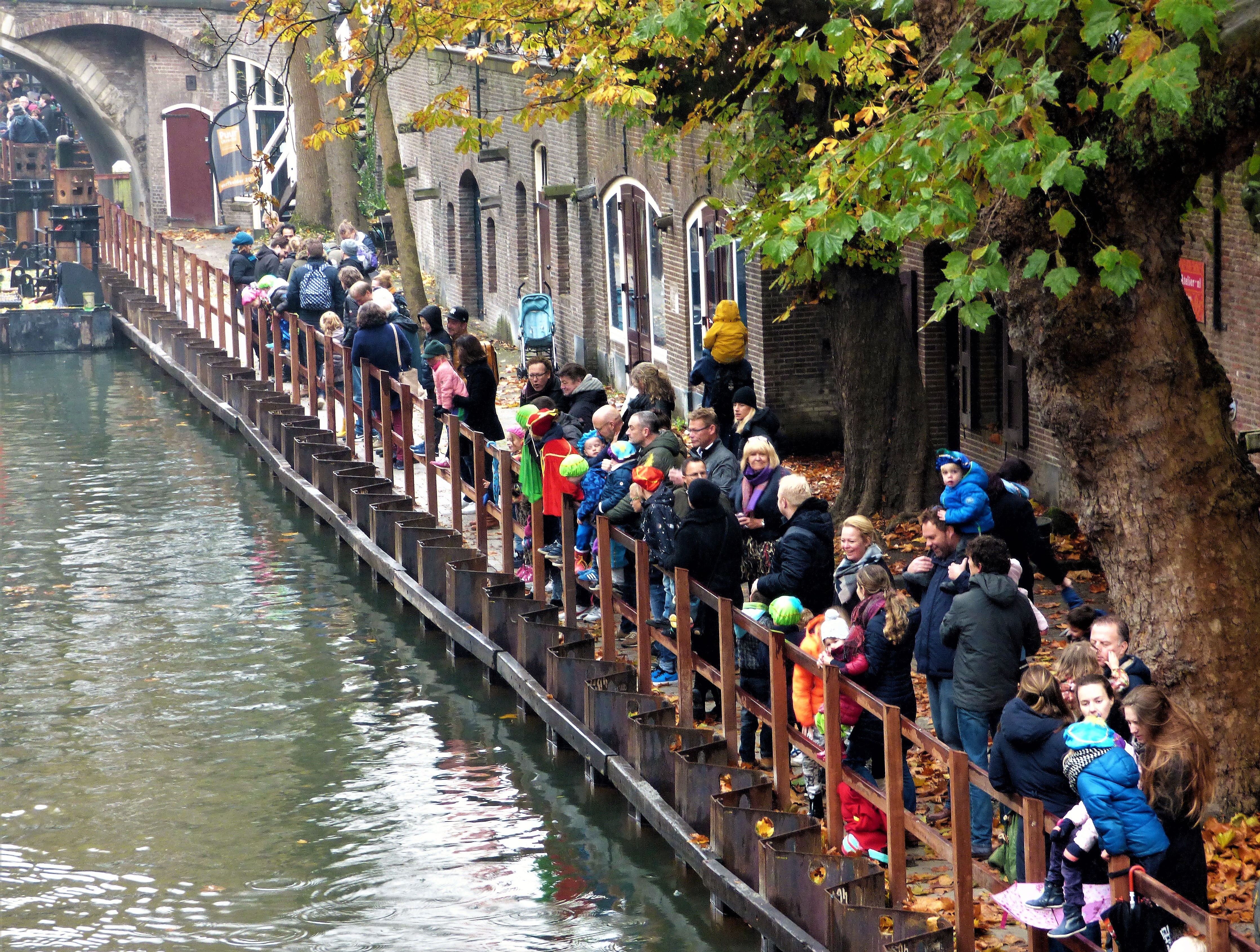 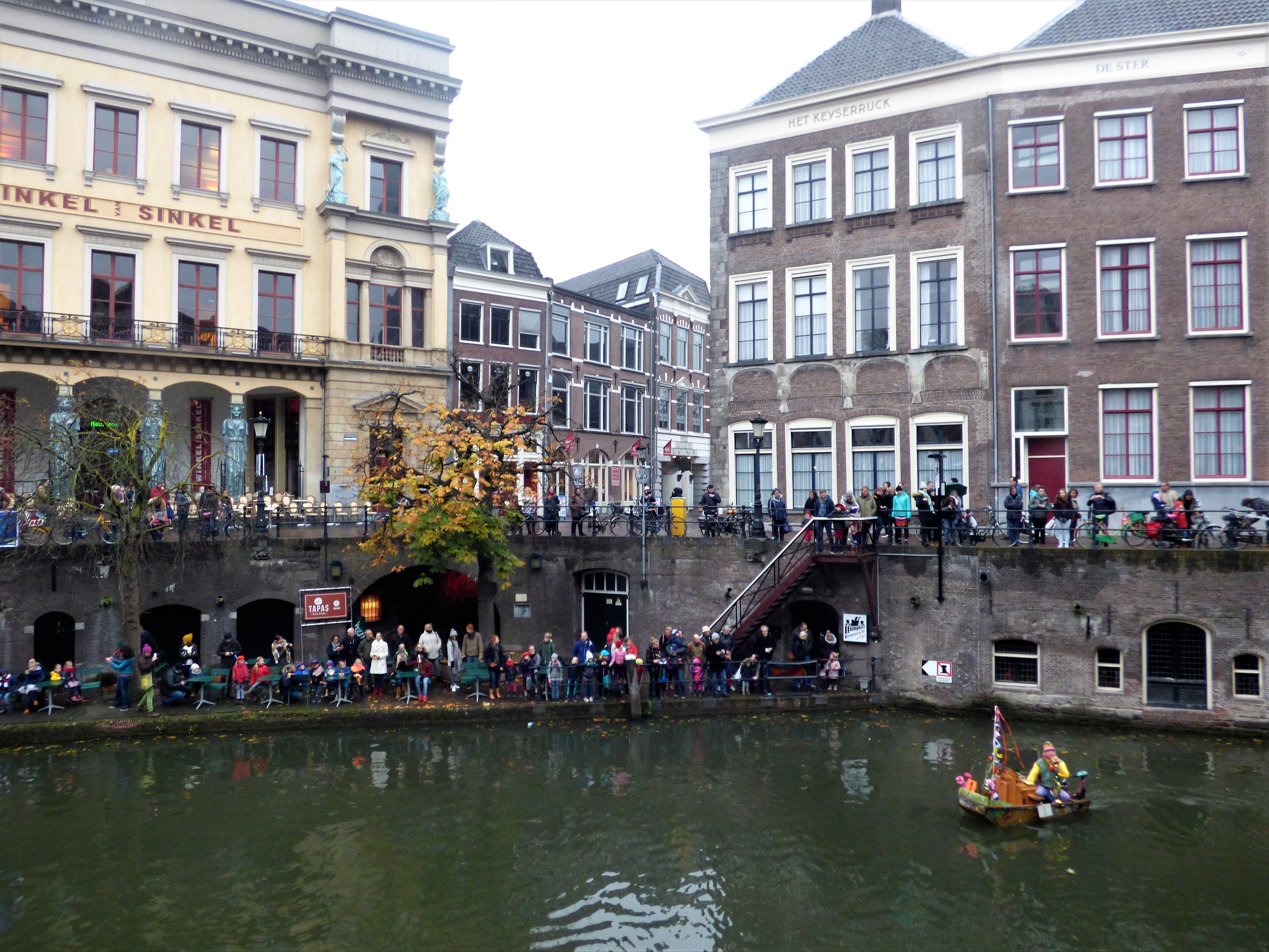 Above: The drizzle fails to deter the crowds during the annual Sinterklaas Parade

As for his apparent ethnicity, there have been many explanations over the years, such as him being of Moorish origin. Another suggestion was that those portraying the character could remain incognito by ‘blacking up’ – which begs the question: Why not Groen (green) Piet or Blauw (blue) Piet?

The current favourite, which appeases some, is that his face is blackened by soot due to climbing through chimneys for his gift-delivering duties, but that has been around for a while now, and the debate still seems to heat up anew each year. Crowds line the canals in Utrecht during Sinterklaas Parade.

Today, in November, on this cold, drizzly morning in the ancient university city of Utrecht, Netherlands, Sinterklaas has arrived with his entourage for his annual parade. He greets the townsfolk as a precursor to the main festivities of the following month and merrily sails or rides his way through the canals or backstreets, spreading cheer and goodwill. Central Utrecht as Sinterklaas Parade draws to a close 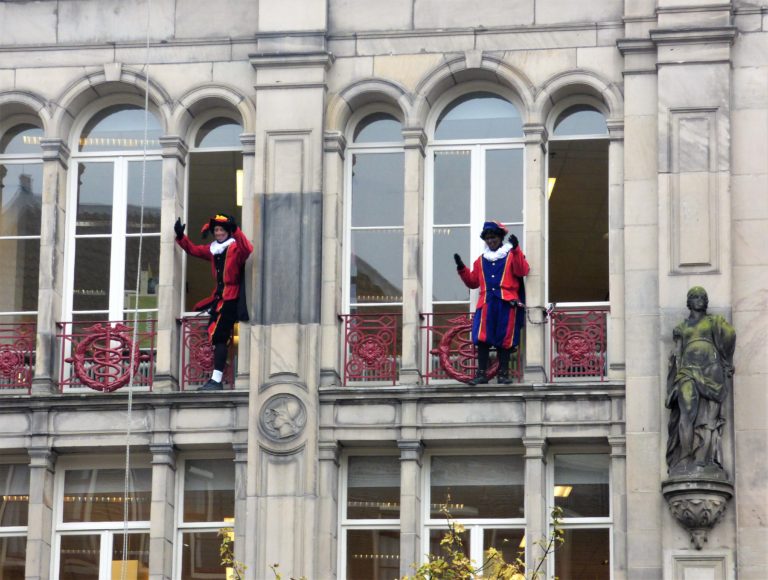 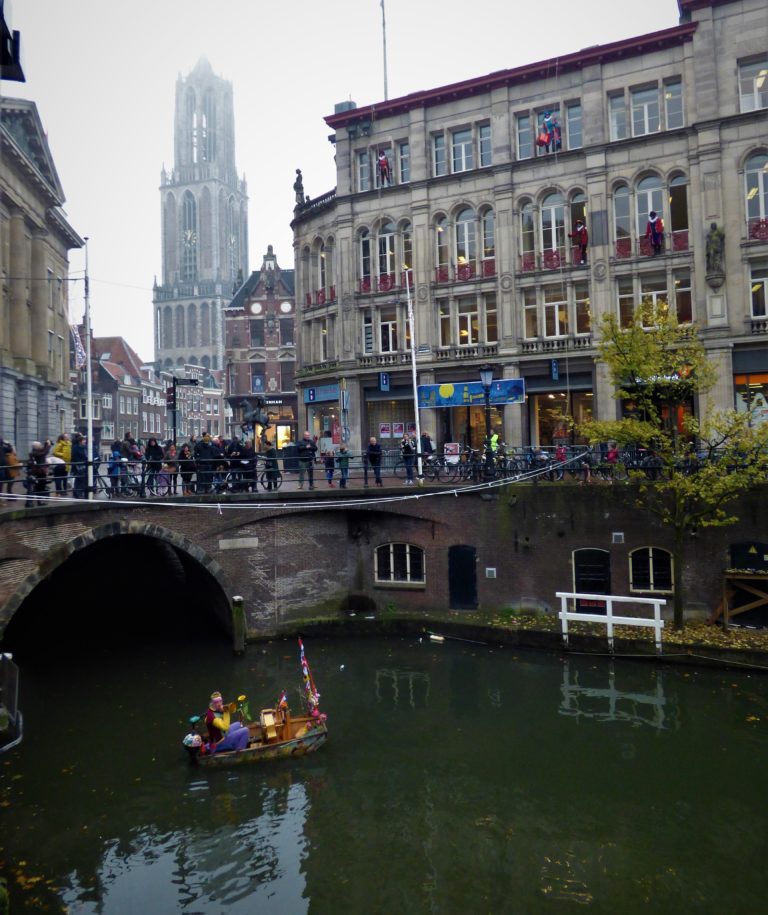 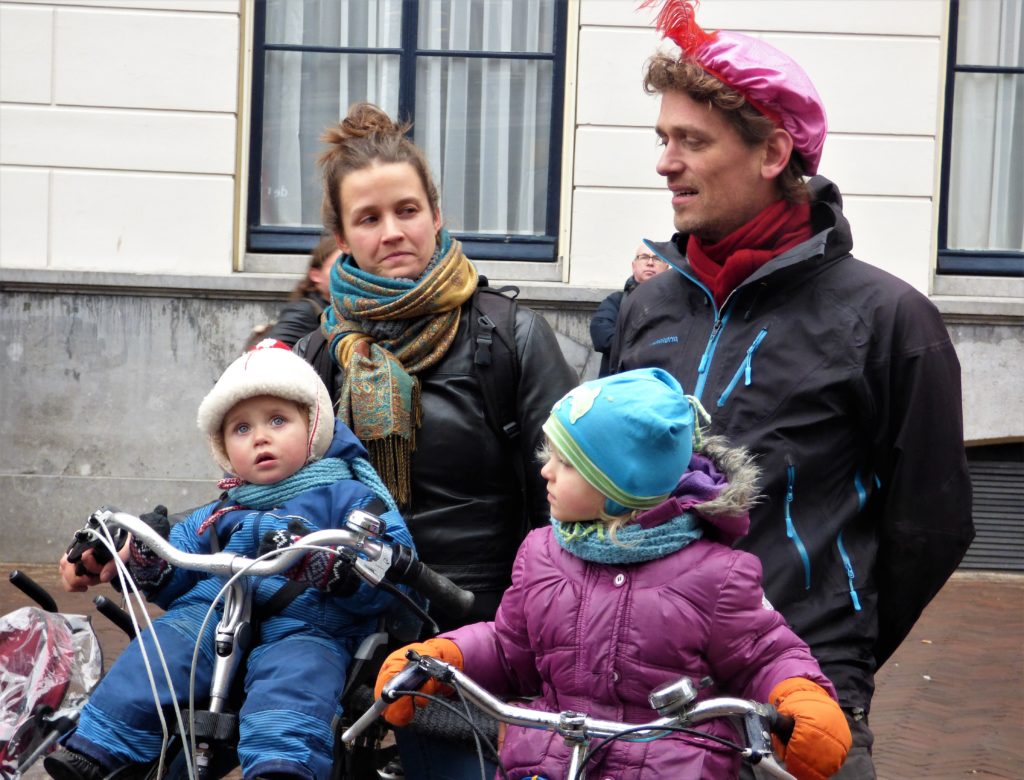 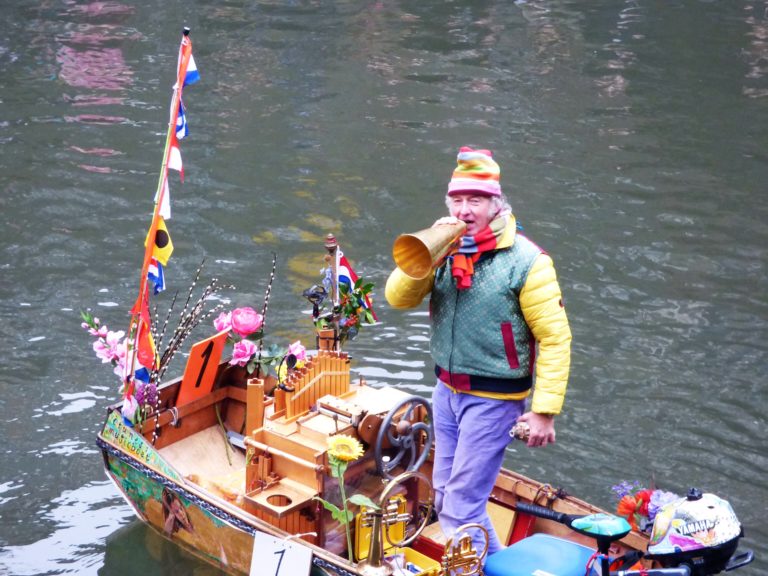 His long-serving sidekick accompanies him – in truth, Sinterklaas has multiple ‘Zwart Piet’ figures helping him out, not just the one -because the logistics of cake distribution clearly need to be scaled up for today’s population levels.

We missed the beginning of the parade and by the time we arrived, Sinterklaas himself had already passed by and was gone, no doubt combing his impressive white beard somewhere before having a well-deserved rest. 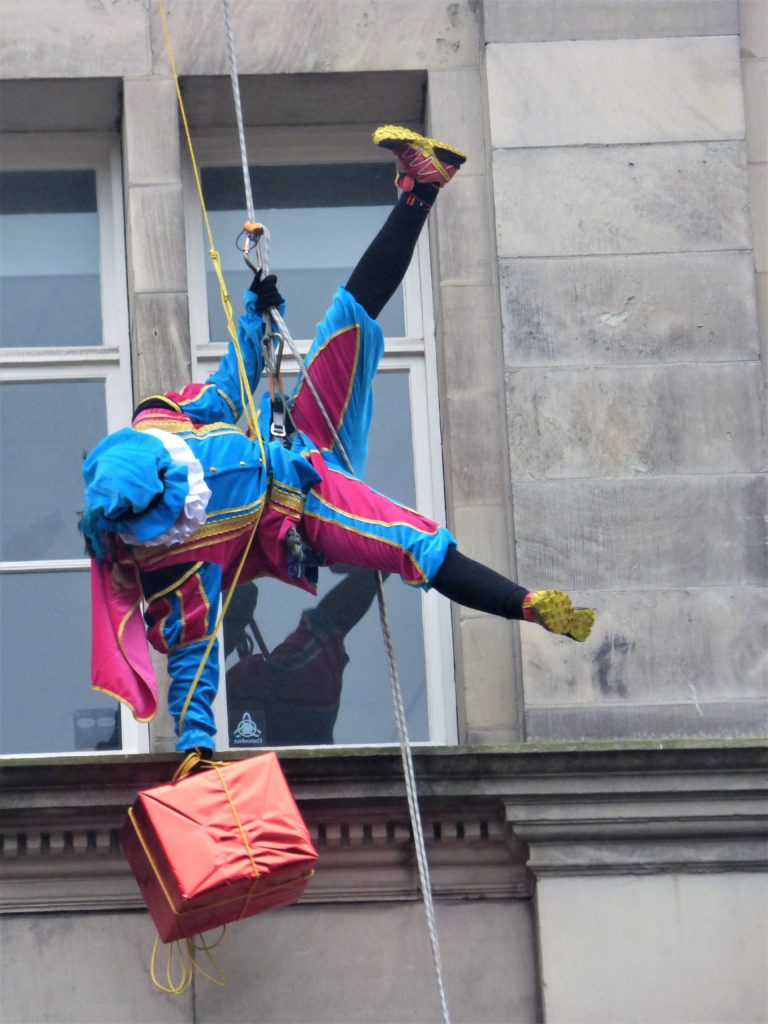 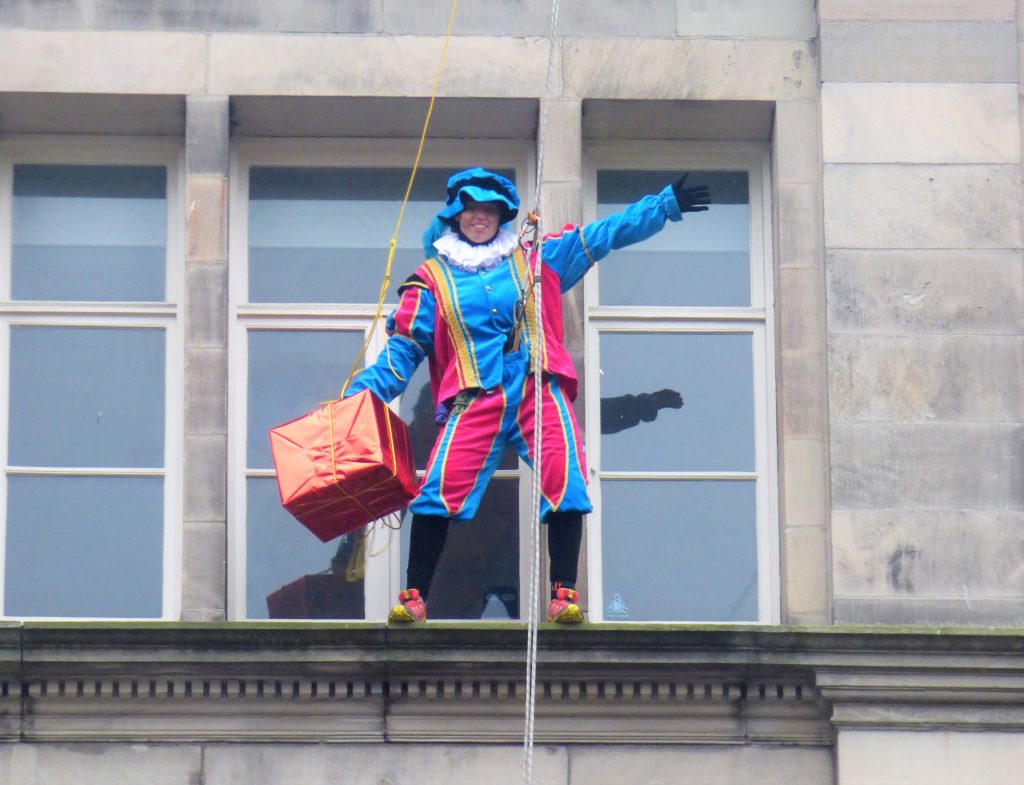 The Zwarte Pieten were still busy in his wake, skipping through the throngs or hauling gifts through store windows. No sign of any discord or unrest here, not today, not in this town. Here at least, these long-established characters served only to brighten the waterways and cobbled lanes and get the seasonal revelries under way. 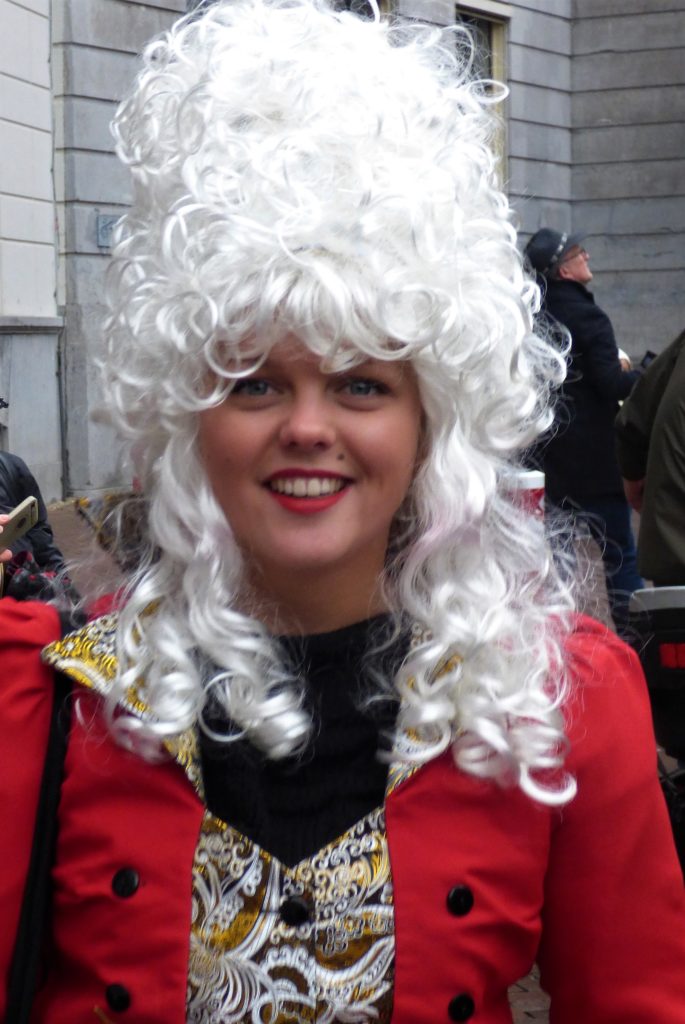 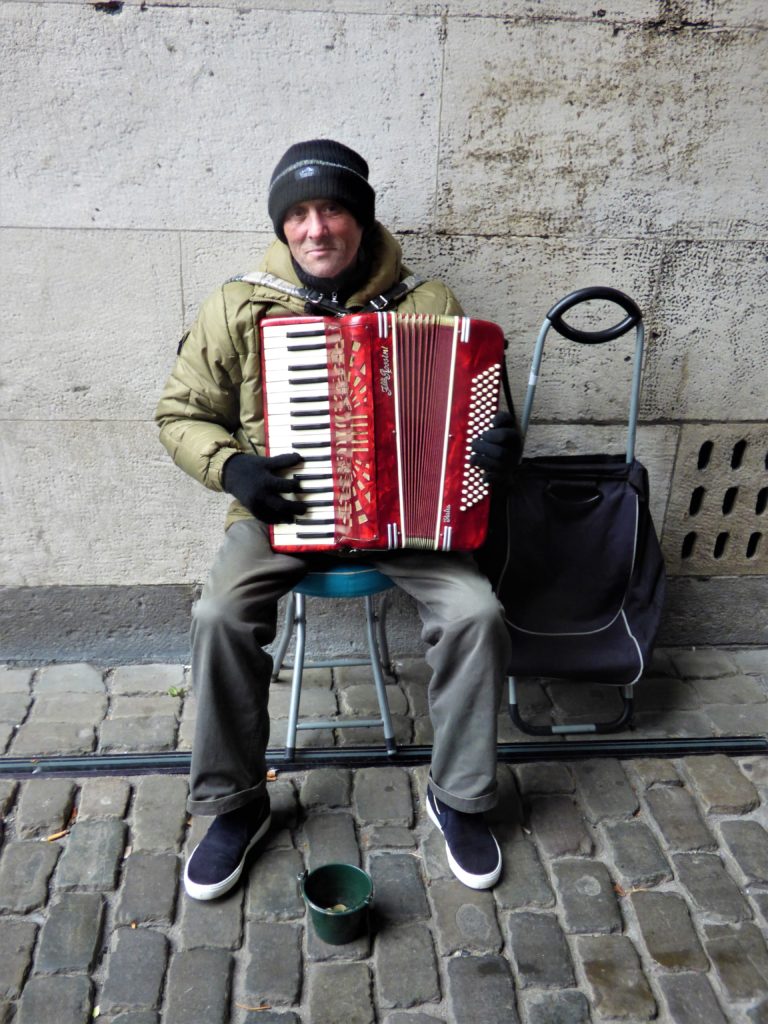 Above: The dressed-up and the dressed-down…all townfolk are out in force today

Past, Presents and Future

So what of the future for Sinterklaas’ problematic pal? In the muddied mix of tradition, political correctness and multiple interpretations, it’s hard to find a clear solution that appeals to everyone.

Perception of Zwarte Piet varies greatly among different ethnicities and age groups, but a study last year of youngsters between the ages of 3 and 7 clearly showed they viewed the character as a jolly fantasy figure than an actual black person.

Yet the unease continues to bubble and froth and I’m sure that over time, changes will need to be made. Disclosure: This article only attempts to describe the traditions and history of Sinterklaas folklore and highlight the current controversy surrounding it.