Bolivia is often overlooked in favour of its more accessible neighbours Peru and Chile, but to bypass it is to miss out on one of the most captivating countries on Earth.

With Amazonian jungle, Andean plains, colonial cities and the incredible Salar de Uyuni salt flats, the diversity of this landlocked nation deserves to be appreciated. And it was to one of Bolivia’s most striking landscapes that I was most drawn during my South American backpacking trip – the Eduardo Avaroa National Reserve. Spanning an area of over 7,000 square kilometres, the Reserve hugs the south-western corner of Bolivia, bordering Chile and Argentina. It lies at 15,000 feet on the high plains (Altiplano) of the Andes, the world’s largest area of high plateau outside Tibet.

Named after Colonel Eduardo Abaroa, Bolivia’s eponymous hero of the War of the Pacific, it’s renowned for its weird rock formations, thermal springs and geysers and semi-active volcanoes. Here, isolated reaches of dry, high-altitude desert are interspersed with ethereal lakes of such outlandish colours that you feel you’re viewing each one through a different psychedelic filter. It’s a Daliesque landscape where you have to keep telling yourself that what you’re admiring isn’t an oil canvas, but the real deal.

Our excursion was the classic 2 night/3 day combined Uyuni/Reserve tour, with the Reserve taking up day 2 and the morning of day 3. The scenery is extraordinary and completely worth savouring – here’s a little glimpse of what you’ll see.

As we enter the Reserve the landscape turns volcanic

The Árbol de Piedra (‘tree of stone’) is one of the most well-known landmarks in the Siloli Desert, which is geologically part of the same desert as the Atacama in Chile. Despite its name, it isn’t actually a petrified tree, but a sandstone rock formation shaped by centuries of wind erosion. This will be one of your first stops after entering the National Reserve on the 2nd day of a 3-day combined tour, and it’s one of the classic photo opportunities that you won’t be able to resist (just make sure not to get too close and risk damaging the structure). The Árbol de Piedra is the best known of these structures, but you’ll see many more throughout your journey. 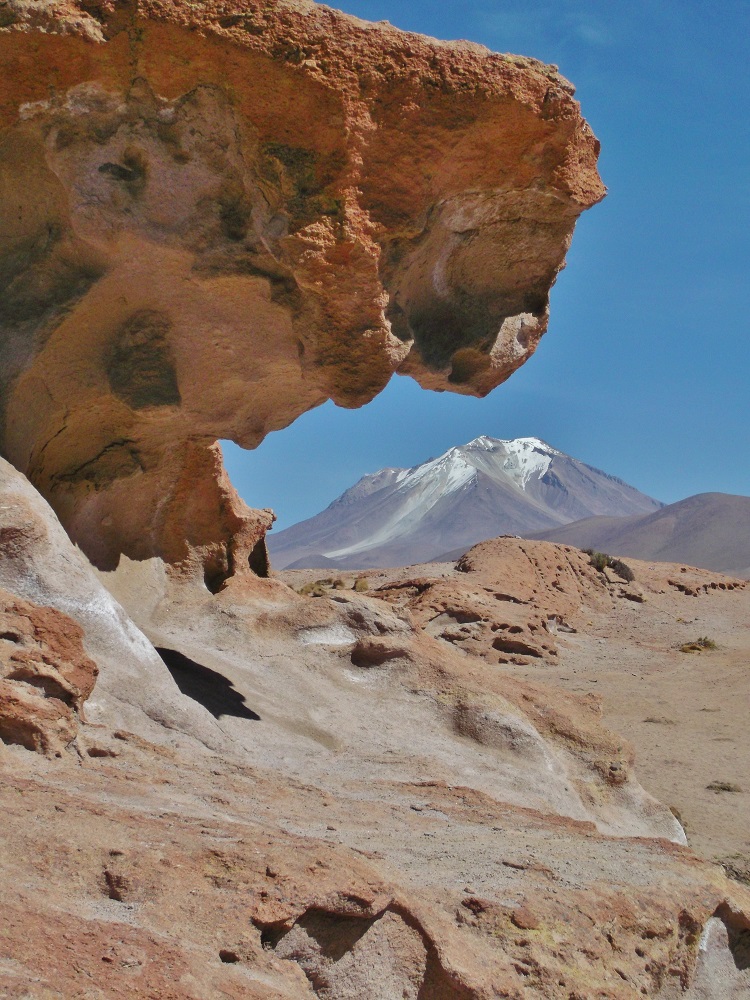 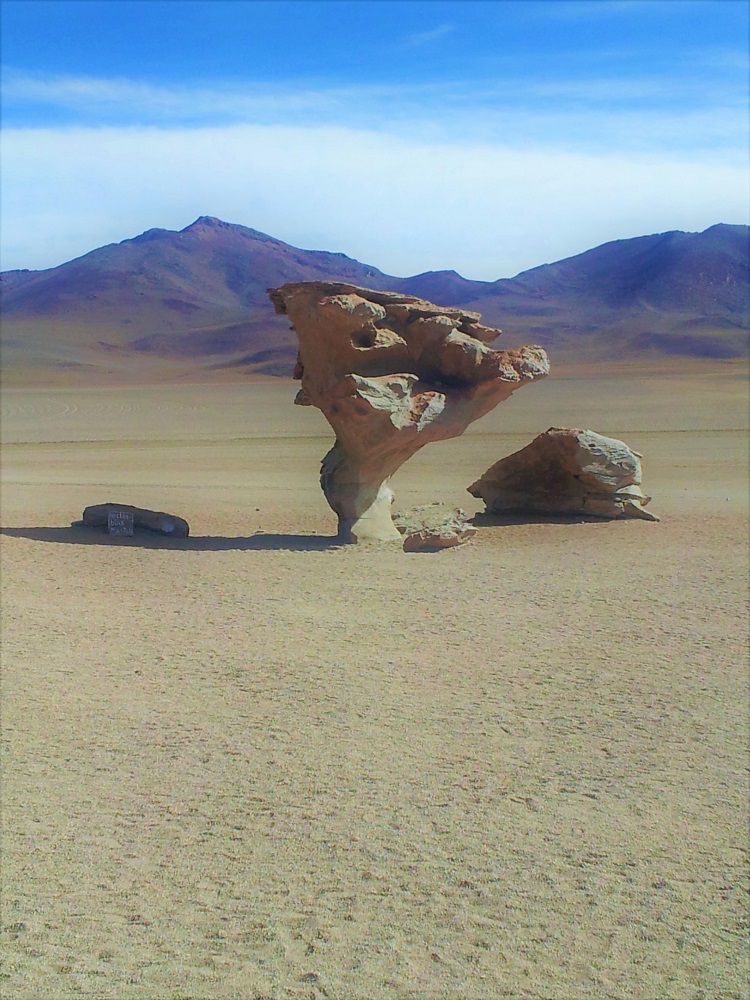 Above: The Árbol de Piedra (centre) and other eroded sandstone formations

Straight out of a Disney fantasy film set, the Laguna Blanca (White Lagoon) is breathtakingly beautiful. Its pale subtle hues give it an aura of ghostliness and I was totally mesmerised by it. This was also our lunch stop, and I was more than happy with the extra time to enjoy the views. Nearby, separated only by a narrow isthmus from the Laguna Blanca, is the vivid green of the Laguna Verde, due mainly to the greater concentration of copper, but we missed out on it as it wasn’t accessible by road on that day, as is sometimes the case. Above and below: Is it a dream? Is it a painting? No, it’s the Laguna Blanca in Bolivia Crimson pools of water mottled by patches of contrasting white borax minerals. The Laguna Colorada (Red Lagoon) confuses the senses, and I’ve never seen anything quite like it. The gory tones are caused mainly by the pigmentation of the salt-tolerant algae Dunaliella salin and the whole thing looks like it belongs somewhere else in the Solar System. If you’re taking the return route to Uyuni you’ll pass the other side of this lagoon the next morning, where the views are even better. The word ‘laguna’ translates literally to ‘lagoon’, however the bodies of water found in Eduardo Avaroa National Reserve are more akin to lakes, as lagoons generally have some connection with the sea or ocean. 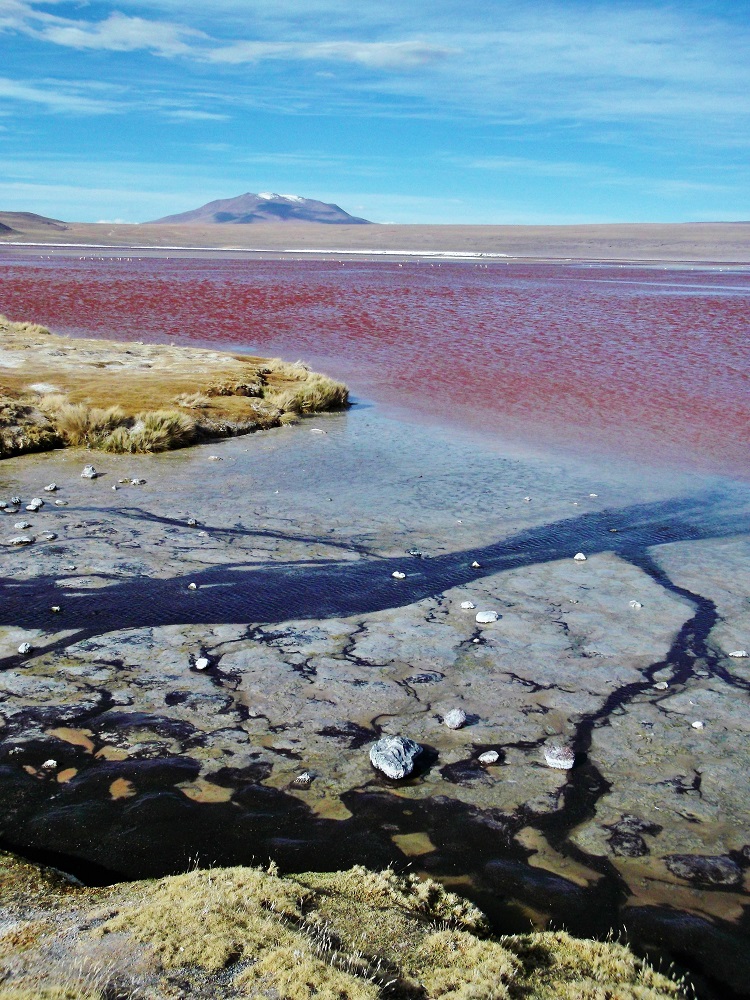 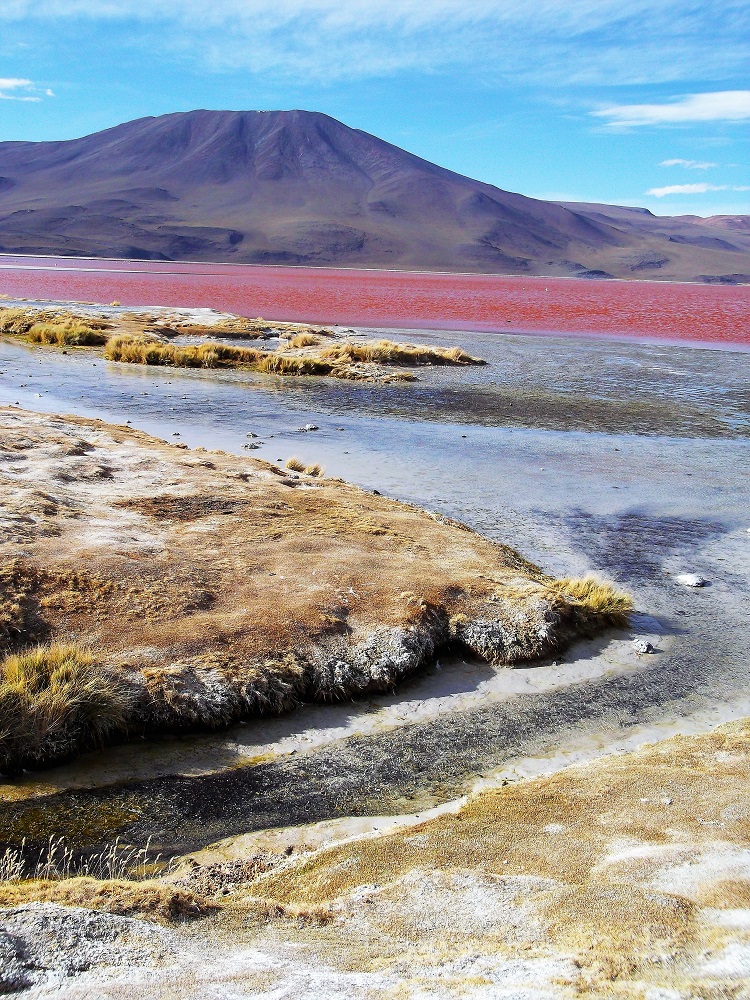 There’ll be an early start for this, because the activity in this geothermal field is at its highest level during the morning hours. Ideally, you’ll arrive at the volcanic crater in time for sunrise and hear the rumble of the Earth’s subterranean melting pot of minerals and liquids, before it gushes and spews the contents up to 50 feet in the air through the crust. The boiling steam plumes provide a huge contrast to the bone-chilling surrounding temperature and can appear suddenly with a loud ‘whoosh’ that’ll make you jump if you’re close by. Then, just when you’re getting used to it all (including the whiff of sulphur), it can stop, and calm is restored as the cycle recommences and the internal pressure begins to builds up again. The hot springs of Aguas Termales de Polques can tempt you into insanity. Where else are you going to change into your bathing suit in freezing temperatures? This will likely be your next stop in the morning, and of course, swimming is optional – some folk opt to just remove their footwear and soothe their feet in the warm water. I’ve been to several thermal baths (mainly in Hungary), but the setting here is both serene and surreal. An unexpected bonus on our way back to Uyuni was this stop-off at one of the lesser-photographed lakes, the Laguna Capina. Strangely, this beautiful lake doesn’t get as much coverage as the others, and I can only think it’s because those who do a one-way tour from Bolivia to Chile (or vice-versa) don’t go past it. It’s as ethereal as any of its more famous cousins, and all the more special because we were the only group there at the time. The contrast of the borax minerals in the lake with the oddly pink rocks around it reminded me of a diamond set in rose gold. No trip to the Reserve would be complete without at least one glimpse of a few flamingos, and three of the six global species of flamingo (Chilean, Andean and the endangered James flamingo) can be found here. Pigmentation in the algae found in these parts contains beta-carotene, which gives these flamingos their pink colouring. Flamingos flourish in this environment, despite temperatures often dropping to sub-zero

Flamingos are amongst the hardiest of bird species, and they need to be in this environment. They can apparently regulate their body temperature. I’ve also heard that on rare occasions their legs can become trapped in the icy lakes as temperatures plummet to sub-zero levels overnight, but the resilient and patient flamingos just wait it out until the ice melts. Our views of the flocks were very much from a distance, but it was still an absolute thrill to see them.

I was hoping for a glimpse of the cute, chinchilla-like viscacha, but flamingos aside, the only other animals we saw on our trip were a few vicuñas. Or alpacas…I’m not entirely sure. I’m almost certain they weren’t llamas or guanacos, though. I’ve promised myself I will learn the difference before my next visit to South America. Above and below: Vicuñas (I think) graze the scrubland on the outskirts of the Reserve. 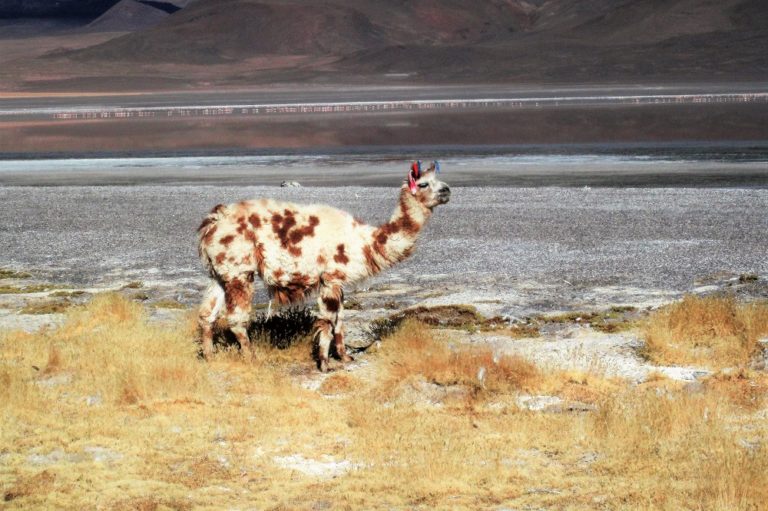 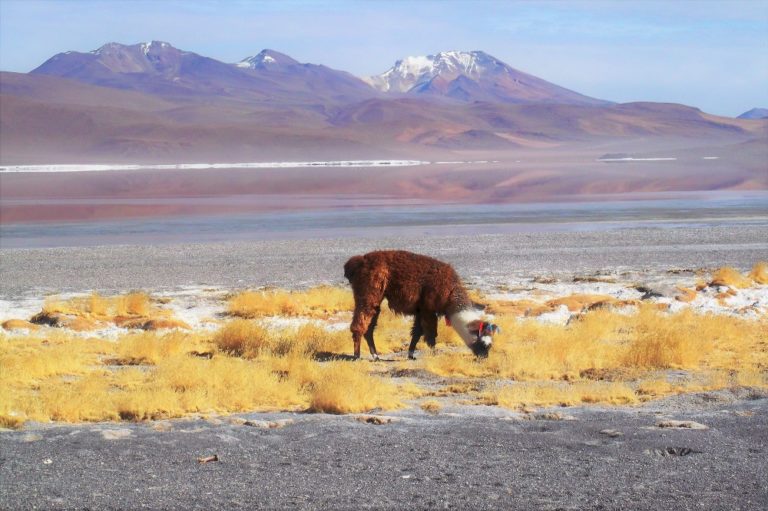 Not much grows here, as you’d imagine, and what does survive is perhaps not as immediately spectacular as the surrounding geology. But delve a little deeper and there’s magic on a smaller scale too.

Those fuzzy green lumps on the ground, for example. Like something out of an environmentally-friendly Steve McQueen sci-fi film (that’ll be ‘The Blob’, if you didn’t get the reference!), this is yareta (or llareta) and it grows at the sloth-like pace you’d expect from a hardy desert plant. It looks like a kind of mossy coating clinging onto groups of boulders, but don’t be fooled by appearances or even touch – the firm mass you feel when you press down is not underlying rock, but thousands of densely-packed stems, and it’s the tiny buds that you see on the surface. I was fascinated by this robust plant and its ability to thrive in this environment. Yareta outcrop in the Siloli Desert. It belongs to the same family as celery, parsley, anise, carrot, coriander & hemlock.

Also existing here are families of tussock grass, or as it’s commonly known in these parts, paja brava (literally ‘brave straw’). It propagates through clonal growth, where a single ancestor plant reproduces by cloning itself and spreading horizontally, often resulting in swirling clumps that meander towards the horizon. It’s a relatively plain-looking thing and I almost missed discovering its impressive survival properties. 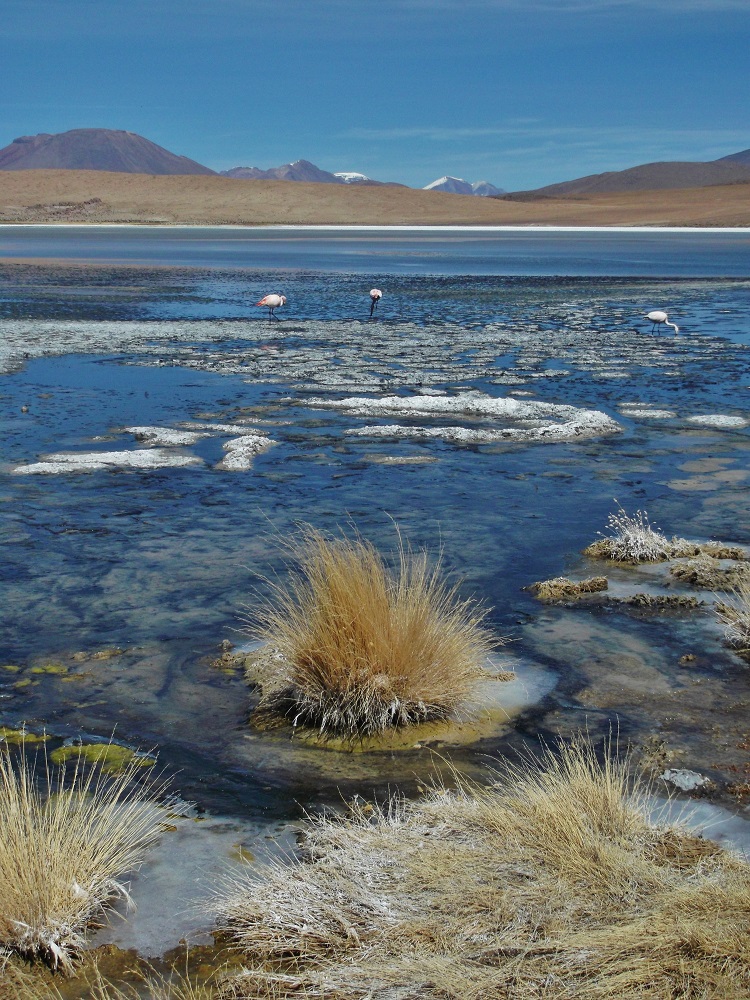 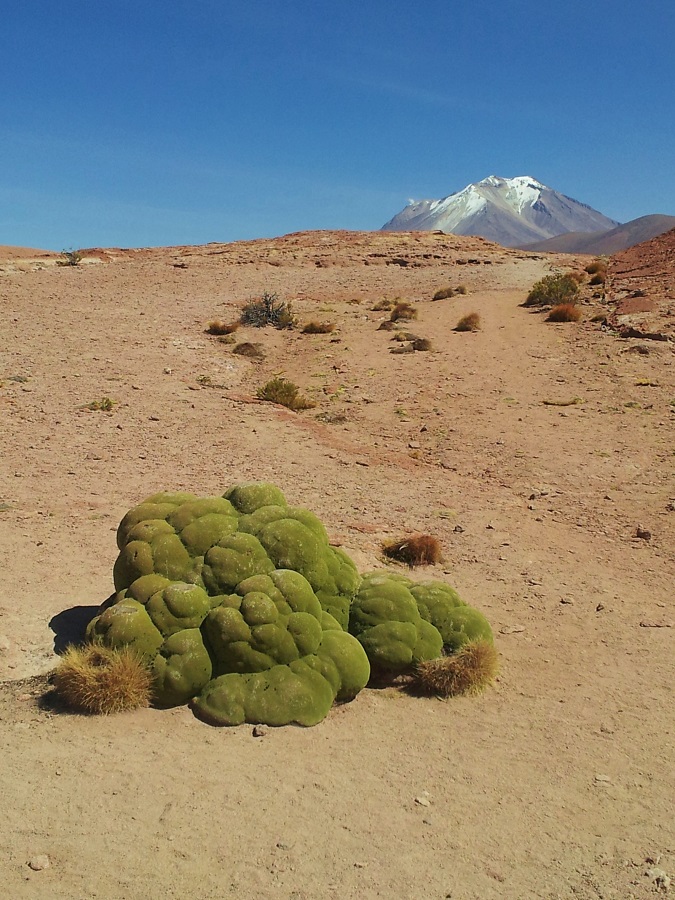 In a place like this, there are no highlights, as there are no lowlights to contrast with. The barrren seas of sand and stone in between lakes are as enthralling as each lagoon, every clump of windswept grass and each wary alpaca. With its rainbow of lakes, twisted rock pillars, alien vegetation, plumes of boiling steam, pink flamingos and painted volcanoes – Bolivia’s Eduardo Avaroa National Reserve stuns the senses and for me it’s a must-see highlight of the Andes. Coming soon will be a post on the Salar de Uyuni itself, plus a nitty-gritty low down on what to really expect from your tour experience. 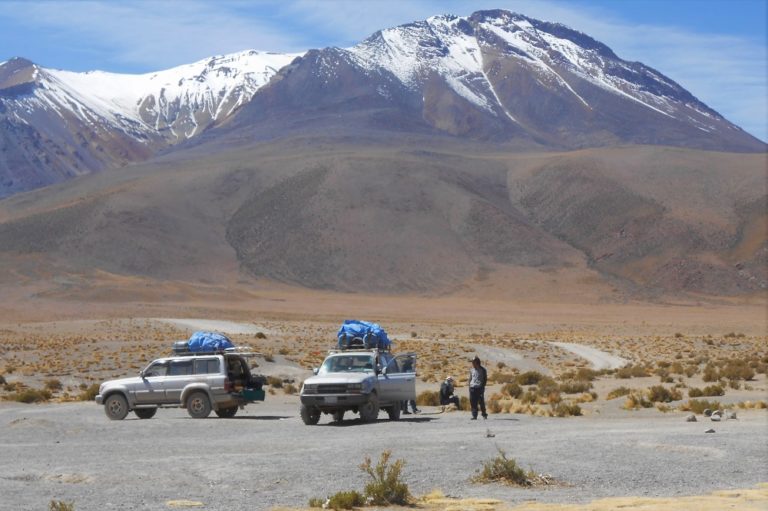 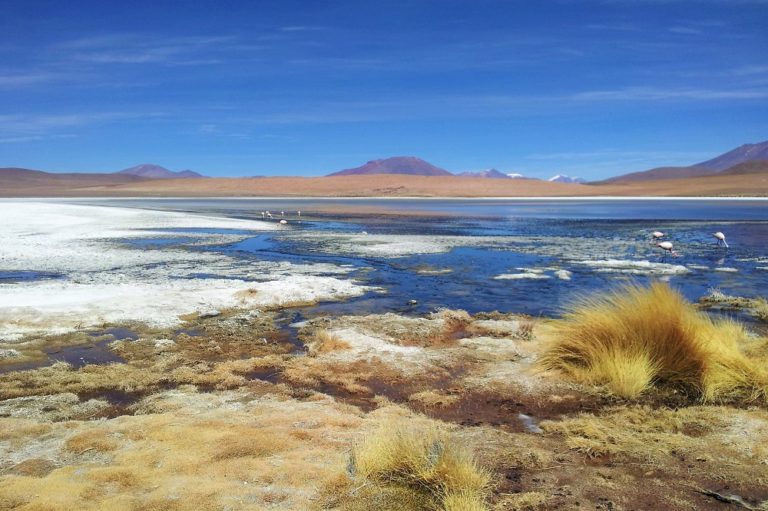 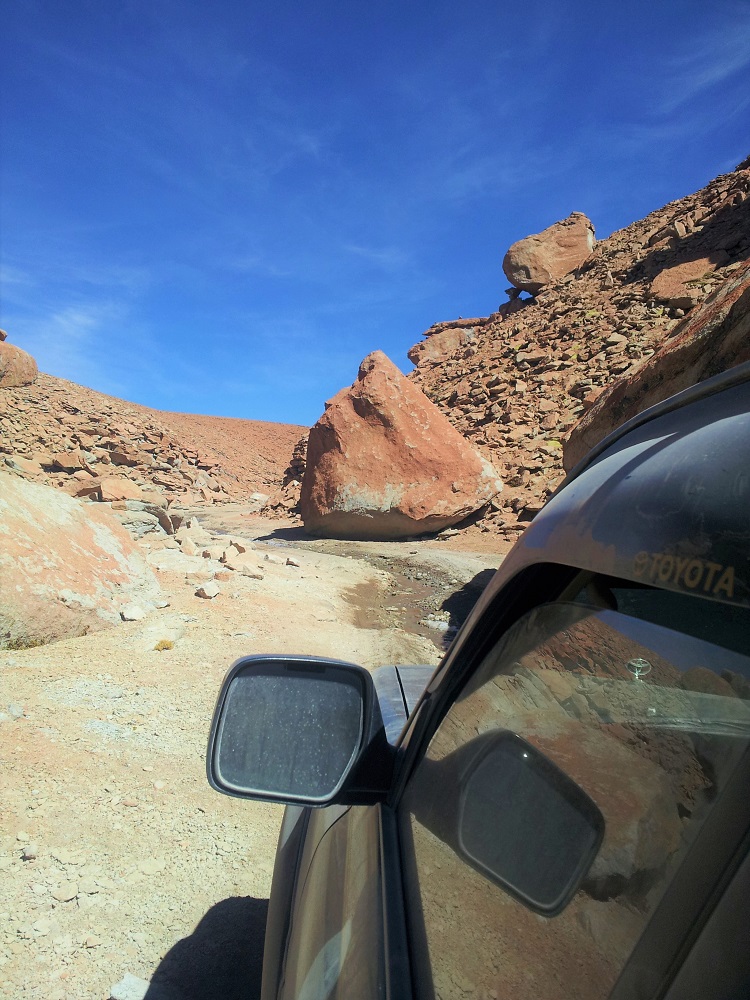 Disclosure: Our visit to Eduardo Avaroa National Reserve was part of a self-funded 3-month backpacking trip across South America. A lot of day 3 is techinically outside the official Reserve area but is included in the tour and is very much part of the same geological stretch of land. Photos were taken with only a mobile phone and budget-end point-and-shoot camera. All opinions are my own.