Within the walls of Arequipa’s Monasterio de Santa Catalina

The atmosphere here in Peru’s Santa Catalina monastery, rarified by altitude, is tempered by streams of sunlight bouncing off the orange, cobalt and raspberry hues of the convent’s walls. Dazzlingly bright plazas are framed by arched cloisters, whose shadows are thick with tales of devotion and piety. And I’ve stopped by during my South American backpacking trip, to uncover the secrets of this mysterious enclave. 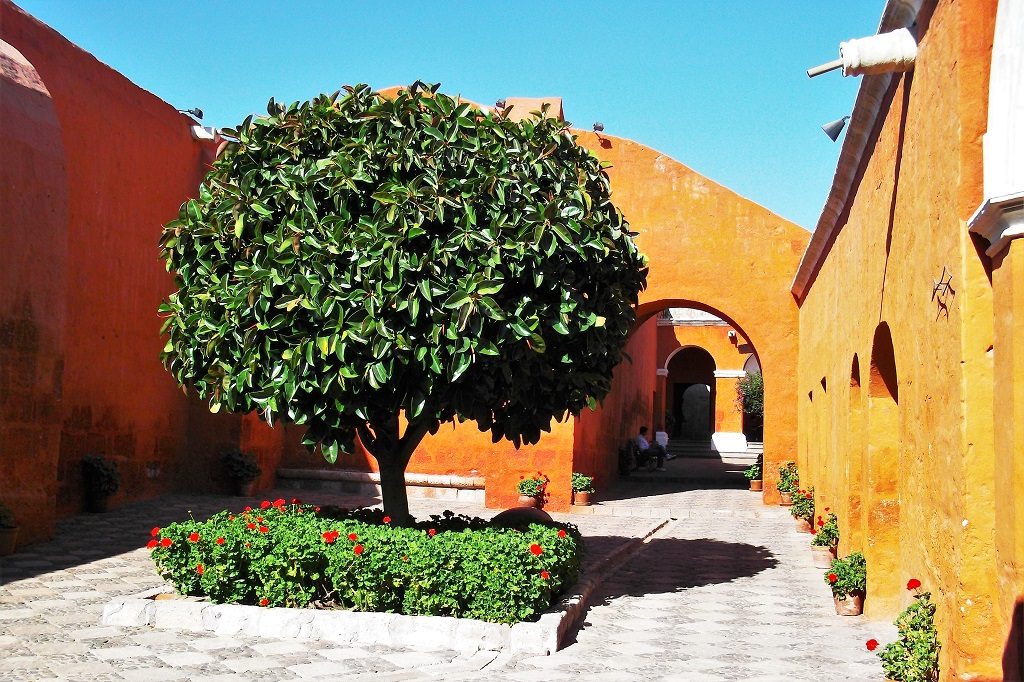 Latin America’s cities are splattered with colonial architecture, but Arequipa’s Monasterio de Santa Catalina de Siena is a world away from the usual ornate and intricate cathedrals or town square edifices. It’s this very contrast that makes it the most unusual religious structure in Peru and the must-see attraction in town.

It’s a beguiling city within a city, high-walled and steeped in centuries of closeted history. Taking up an entire 20,000 square metre block in the heart of Arequipa, it’s not just a religious building, it’s a living, breathing illustration of the lives and customs of the local people over the last few hundred years. 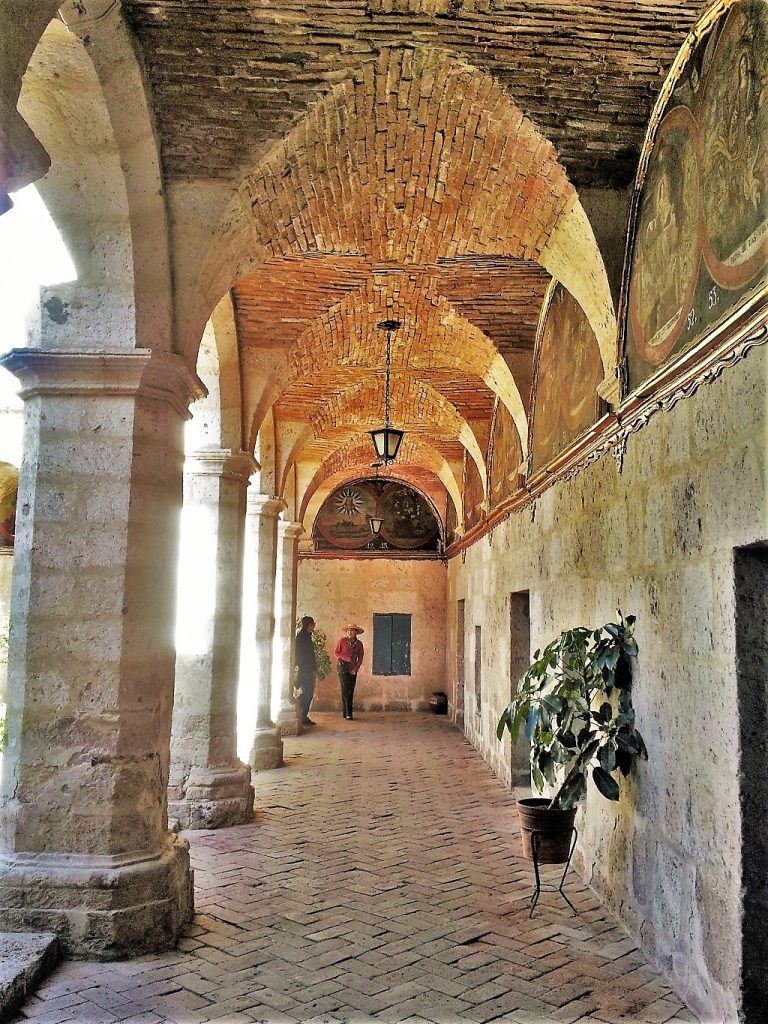 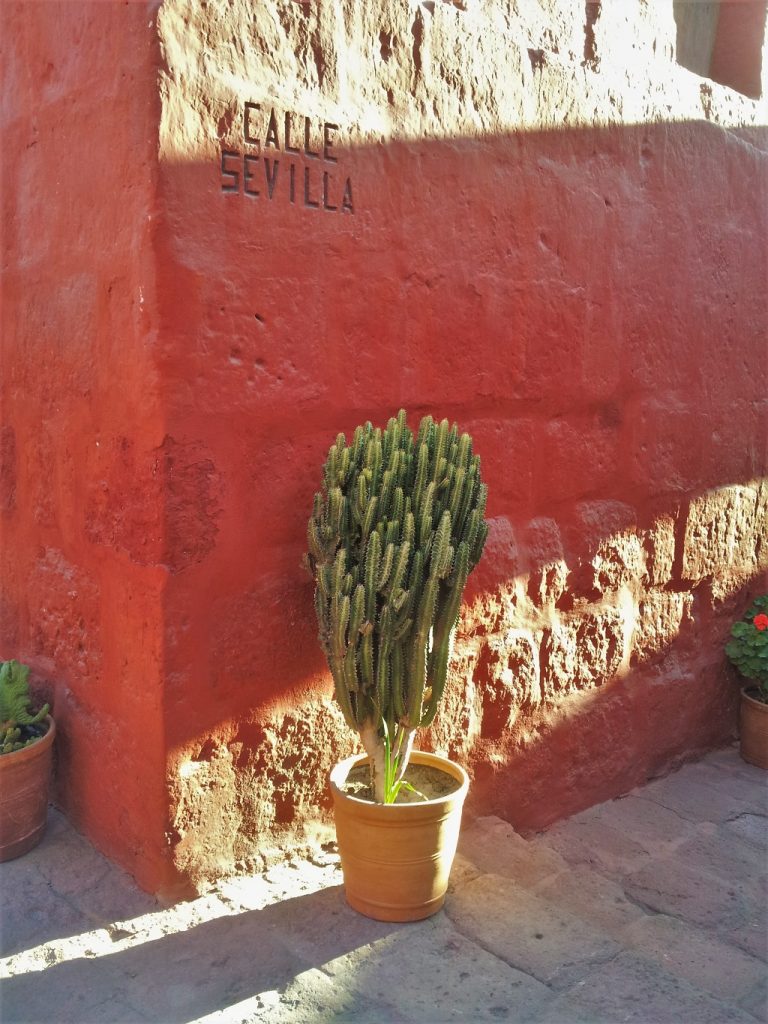 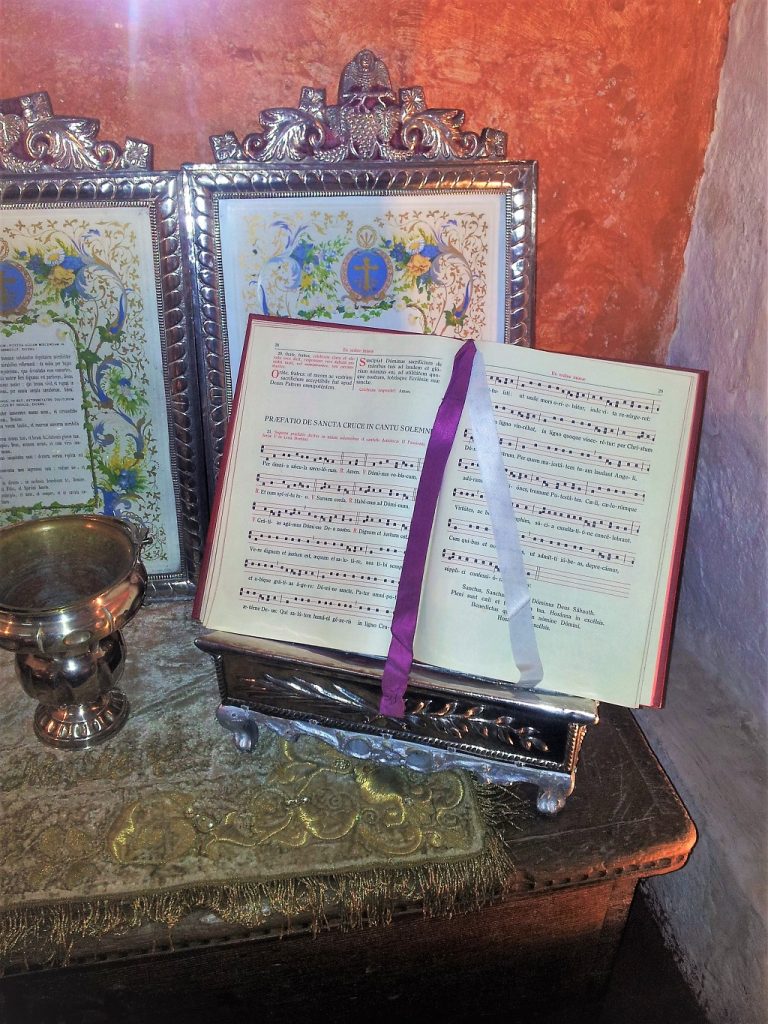 During the 16th century, the 5th Viceroy of Peru, Francisco Toledo, granted permission to the city for the construction of a monastery, under the Domenican order. Before it was even completed, a local widow, Doña María de Guzmán – beautiful, young, rich and childless—decided to shun her hitherto material lifestyle by donating much of her wealth to the project and enclosed herself in the convent, which was still incomplete. In 1580 Doña María, recognised today as the convent’s founder, formally became its first prioress. The doors closed behind her and despite the convent subsequently becoming a fashionable career choice for daughters of the landed gentry, Santa Catalina was to largely remain a world of intrigue and mystery for the next 400 years.

In 1972, following concerns about the conditions within the convent, local authorities instructed the nuns to install modern facilities such as electricity and running water. To cover the costs of these installations, the convent doors were opened and tourist visits introduced, finally allowing the world without to observe the world within….for better or worse. 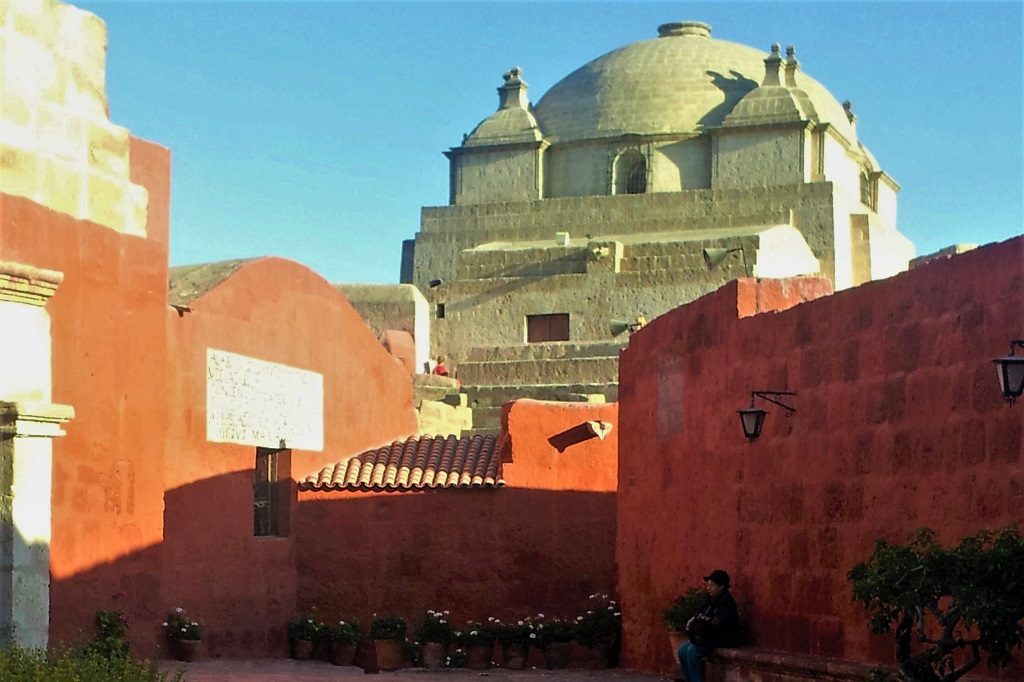 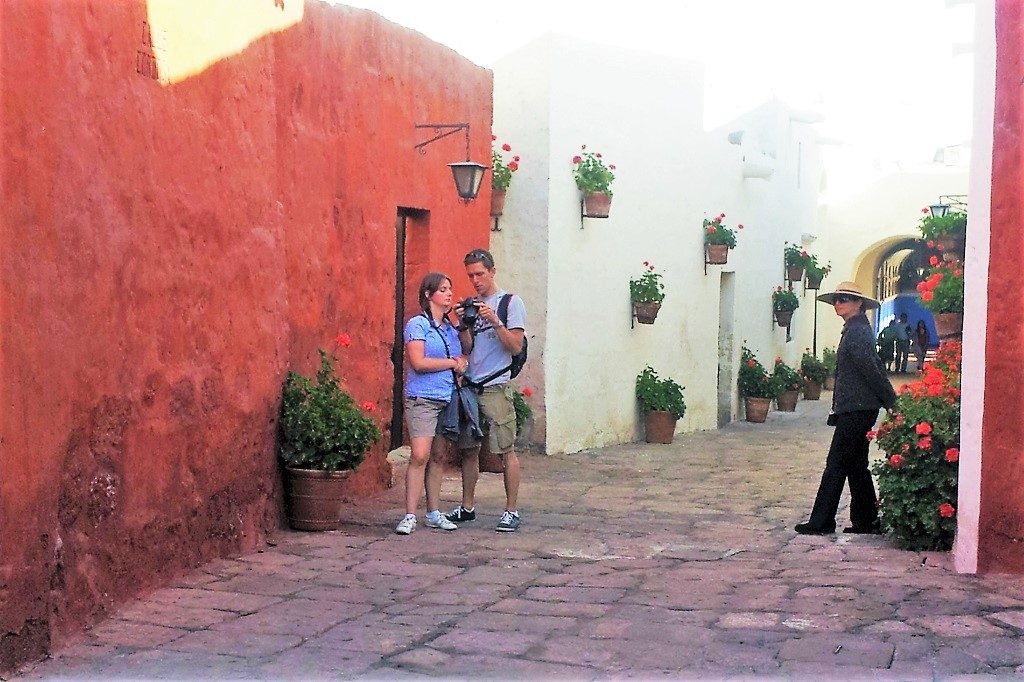 The convent is built predominantly from sillar, the porous, pinkish-white volcanic rock commonly found in this region and which gives Arequipa its ‘white city’ of Peru moniker. The architecture, unusually for the period it was constructed, is a fusion of colonial mudéjar (Moorish-Christian) and indigenous styles, often referred to as ‘mestizo’ in nature. It’s one of the very few places in Latin America where you can see this combination, as more often than not, local structures were completely decimated after the Spanish Conquest.

Many changes have occurred since the original monastery was completed, but these were due to environmental, not socio-political factors. Santa Catalina sits in an area of high seismic activity and over time many earthquakes have caused considerable damage, not all of which could be immediately repaired. 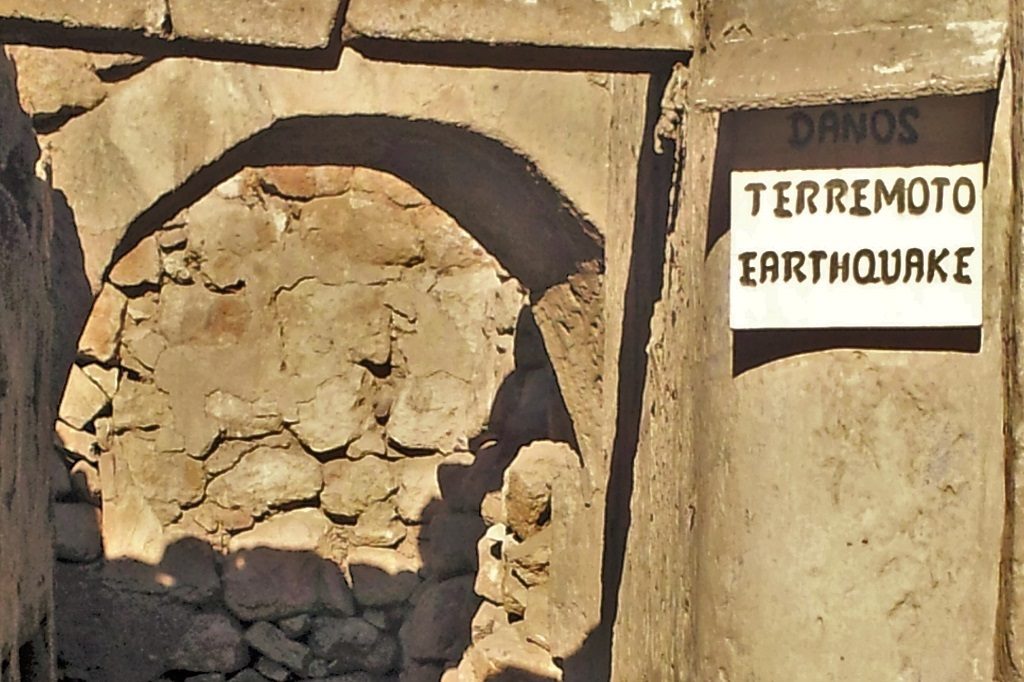 As more nuns arrived, they brought some of their families’ wealth with them, allowing them to make good some of the damage from each earthquake. In many cases, changes were made to the original design. For example, what was formerly a shared dormitory became a series of private living cells. It made sense really – the convent was steadily increasing in popularity and the dorm had become too small. The convent remains under threat and is cited as one of the Most Endangered Monuments on the World Monuments Watch list. 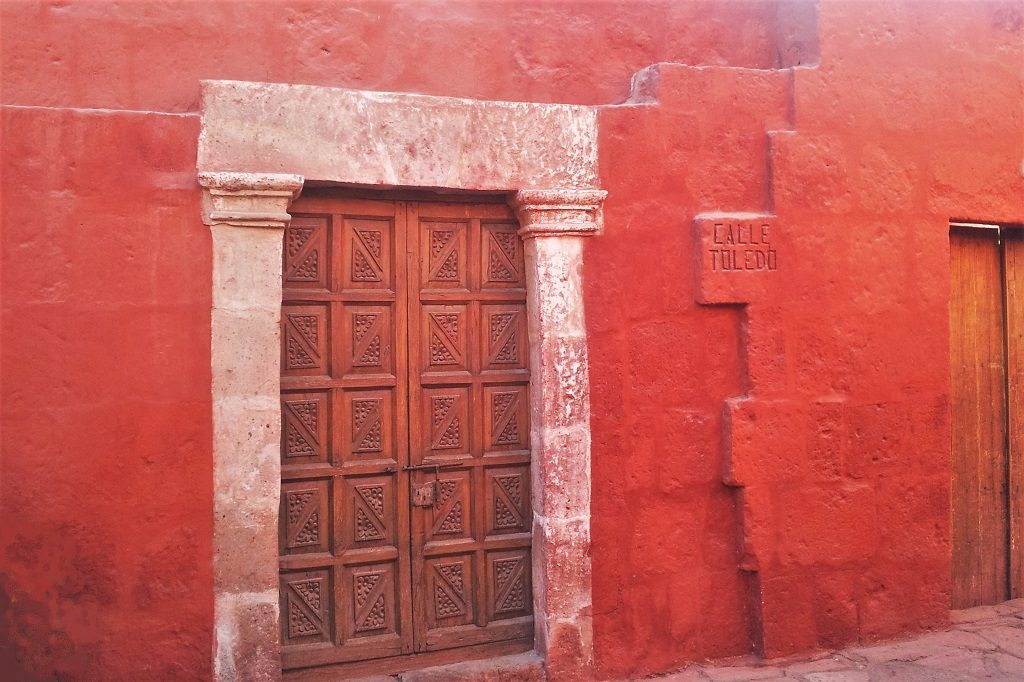 As you enter the citadel, the silencio (silence) arch leading into the Novice Cloister sets the scene and you’ll probably find yourself whispering in subconscious solidarity with the nuns’ way of life. Novice nuns were resolved to 4-year period of solemn work and prayer in silence in this Cloister, for which their wealthy families paid an annual dowry. After this time the nuns could choose to continue in religious service or return to the wider world and leave the convent – despite probably bestowing humiliation to their family as a result. 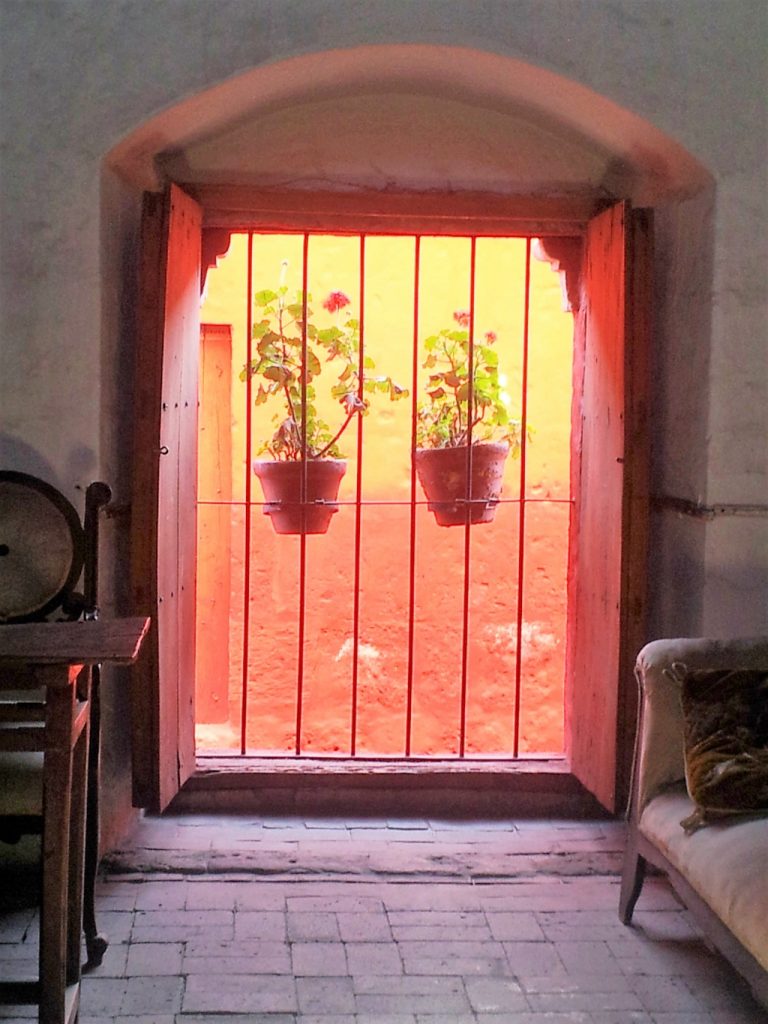 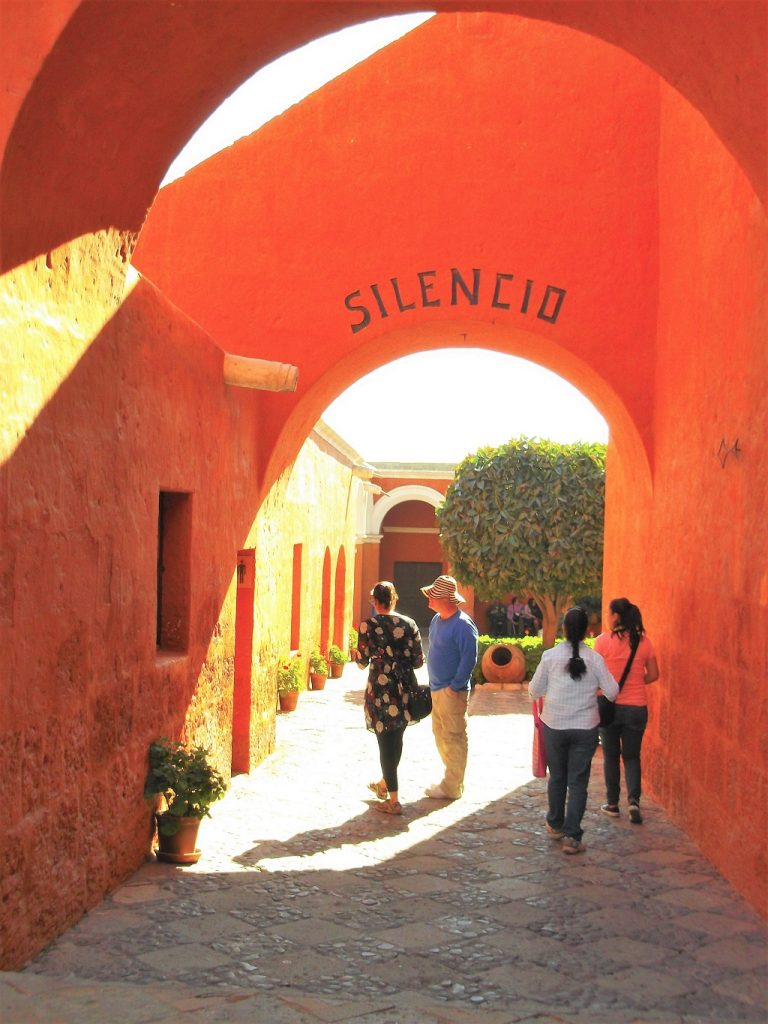 The cluster of trees at the Orange Cloister plaza, framed by Mediterranean-blue arches, represent renewal and eternal life, and it is here that graduate novices proceed if they decide to stay. From here, you can choose whether or not to take a quick look at the slightly morbid Profundis Room, where deceased nuns were laid to rest for a period of mourning. The walls here are adorned with portraits of the departed sisters, painted posthumously within 24hrs of their demise, as painting them while they were alive was strictly forbidden. 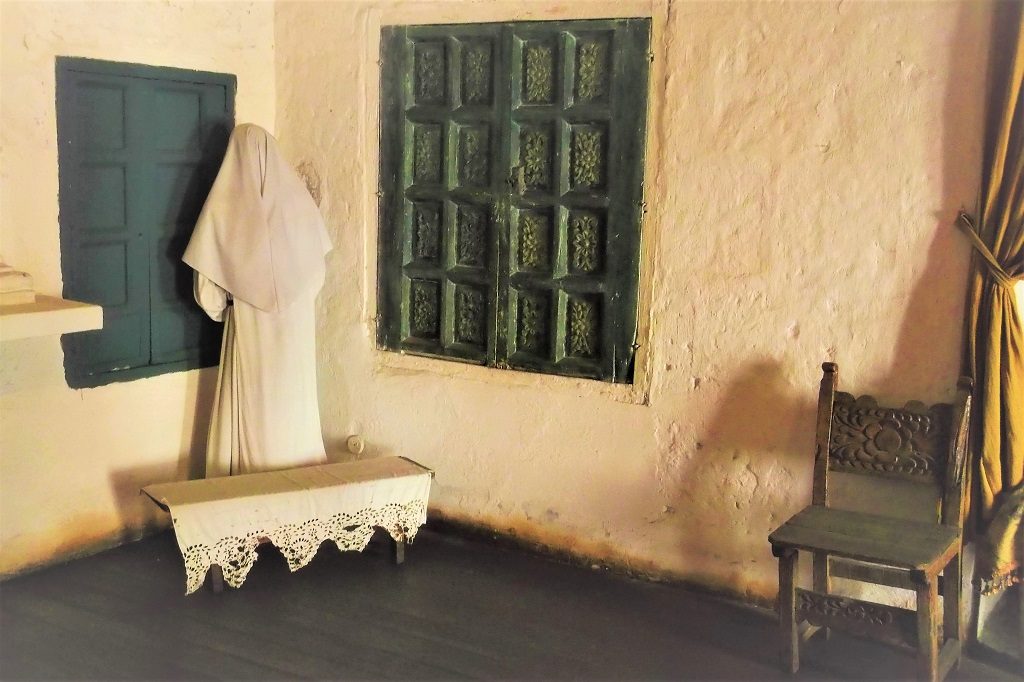 Leading away from the Orange Cloister and running down the middle of the citadel, Calle Córdoba takes you past cells that once provided living quarters for the nuns. These cubicles varied from the very basic to the somewhat sumptuous, because, despite the nuns having taken vows of poverty, this was all relative to their family fortunes. In many cases, the wealthiest residents brought servants with them and lived in much greater comfort than their fellow sisters.

As you stroll along, shrouded figures glide through shafts of fuzzy light and into barely-visible alleys or hidden nooks. Or it could just be your imagination. Only around 19 resident nuns, aged from mid-20s to over 90 remain, mostly in seclusion and far from the prying eyes of the hundreds of tourists who visit daily. But sometimes, out of the corner of your eye…. 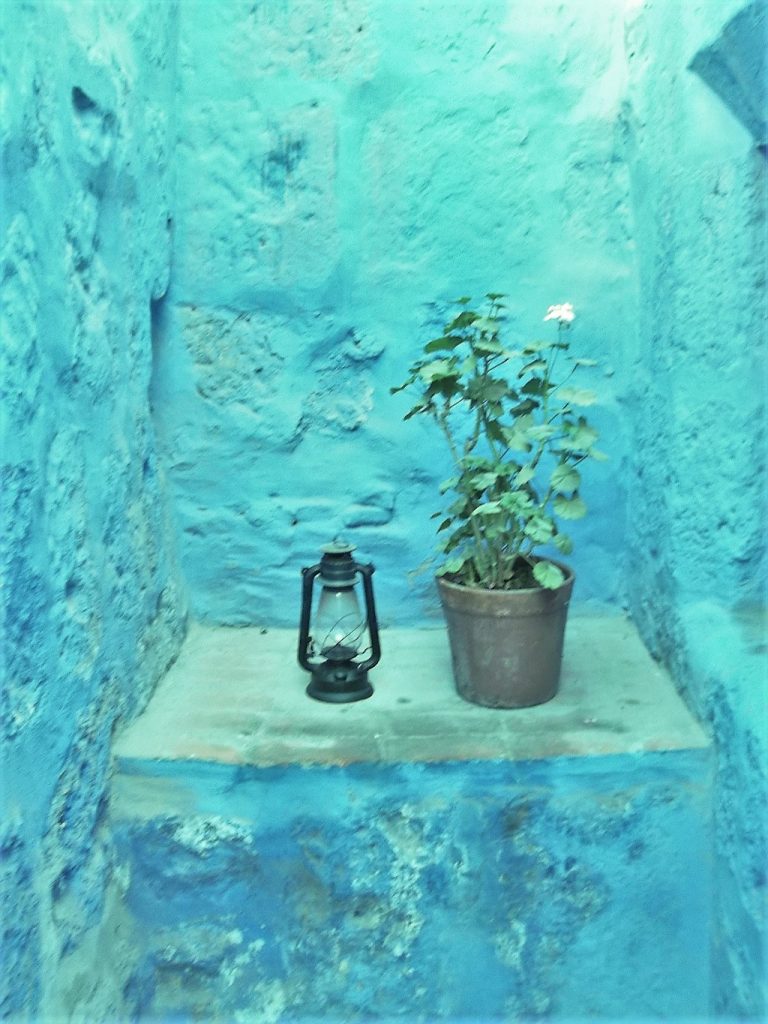 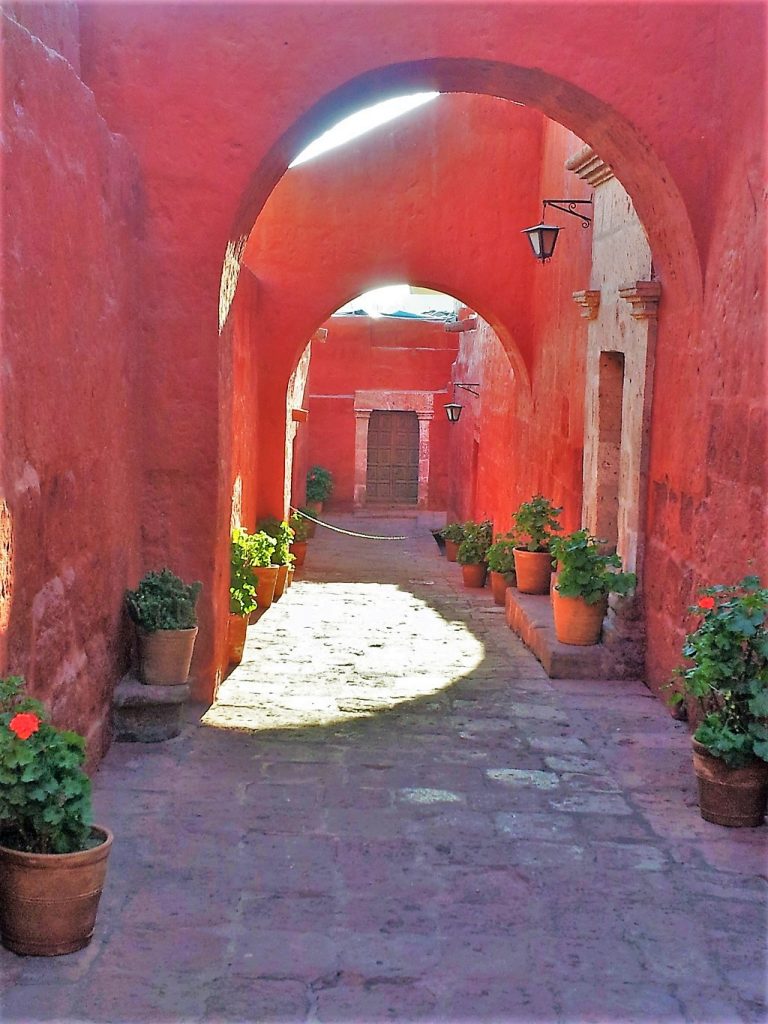 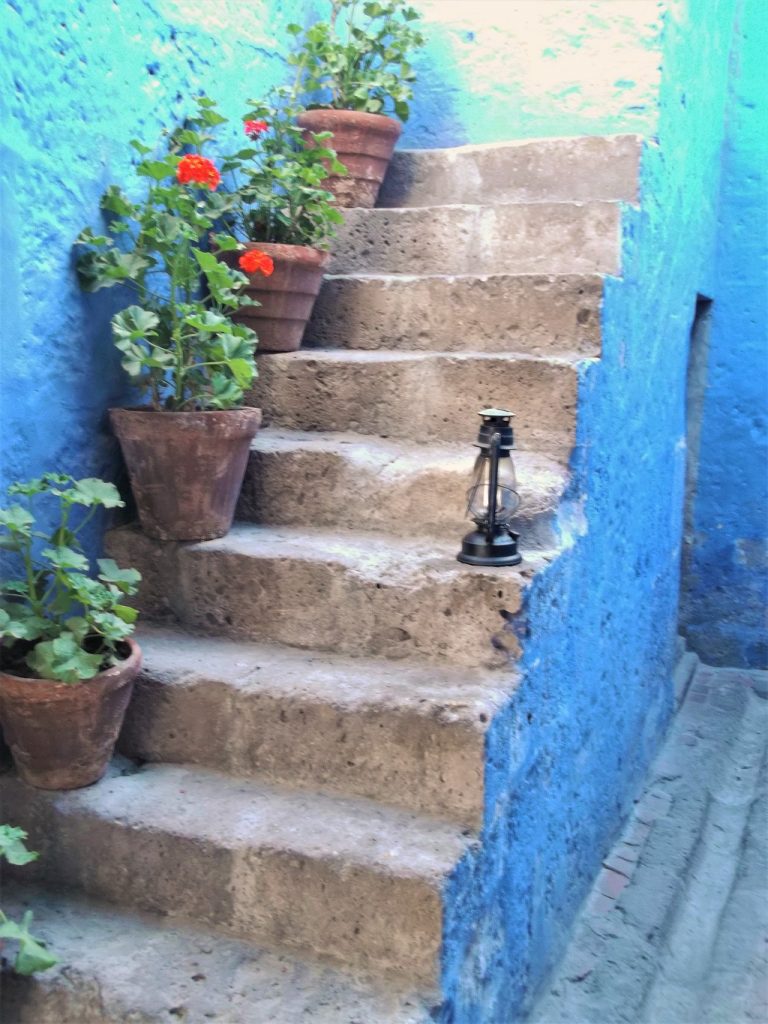 Following on from Calle Córdoba is Toledo Street. Stroll through and you come to Santa Catalina’s café, serving a basic, but welcome selection of pastries, snacks, tea, coffee and juices. The café is set in the grounds of one of the convent’s three orchard groves and provides an opportunity to reflect on the contrast between the inside world of the convent and the outside. Two worlds, not colliding, but co-existing.

Continuing around to the other side of the convent brings you to Calle Burgos, which then widens out into Calle Granada, from where you can peek into the original communal kitchen, its musty ambience and charred walls telling of centuries of bubbling pots of cocido stew and the baking of simple loaves. 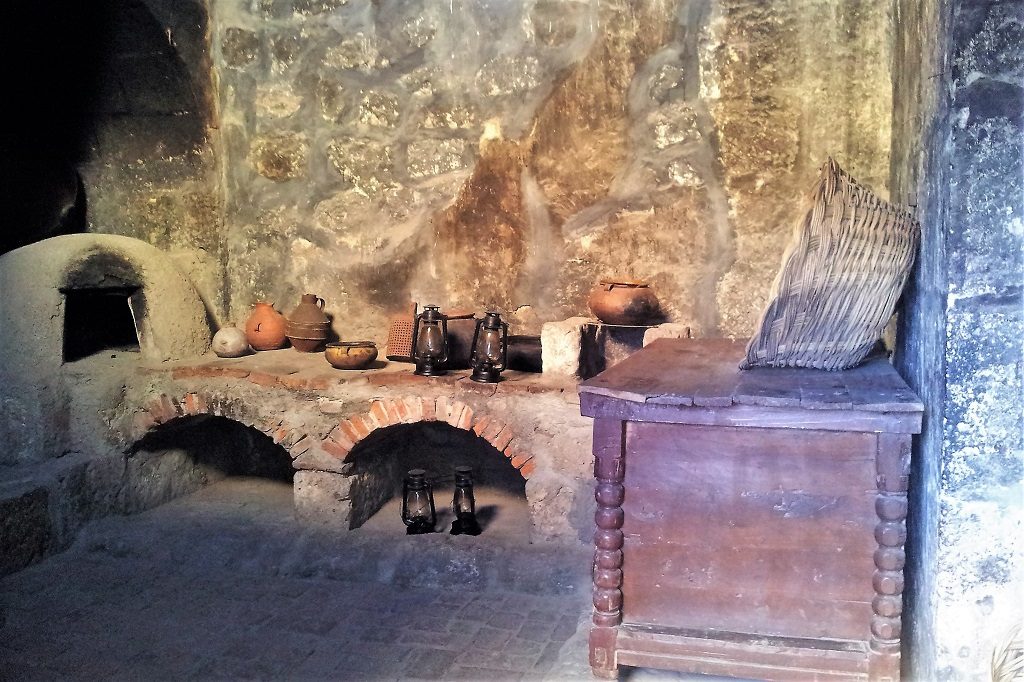 Further along, is Plaza Zocodober, where nuns would gather on Sundays to swap the fruits of their labour, such as breads and biscuits or embroidered linen and hand-made soap.

To one side of the square lies the cell of Sor (the antiquated form of ‘Sister’) Ana Monteagudo Ponce de Leon, a 17th-century nun who was beatified by Pope John Paul II in 1985 and who was known for a miracle she is said to have performed and for her wisdom and apparent skill at foretelling events. 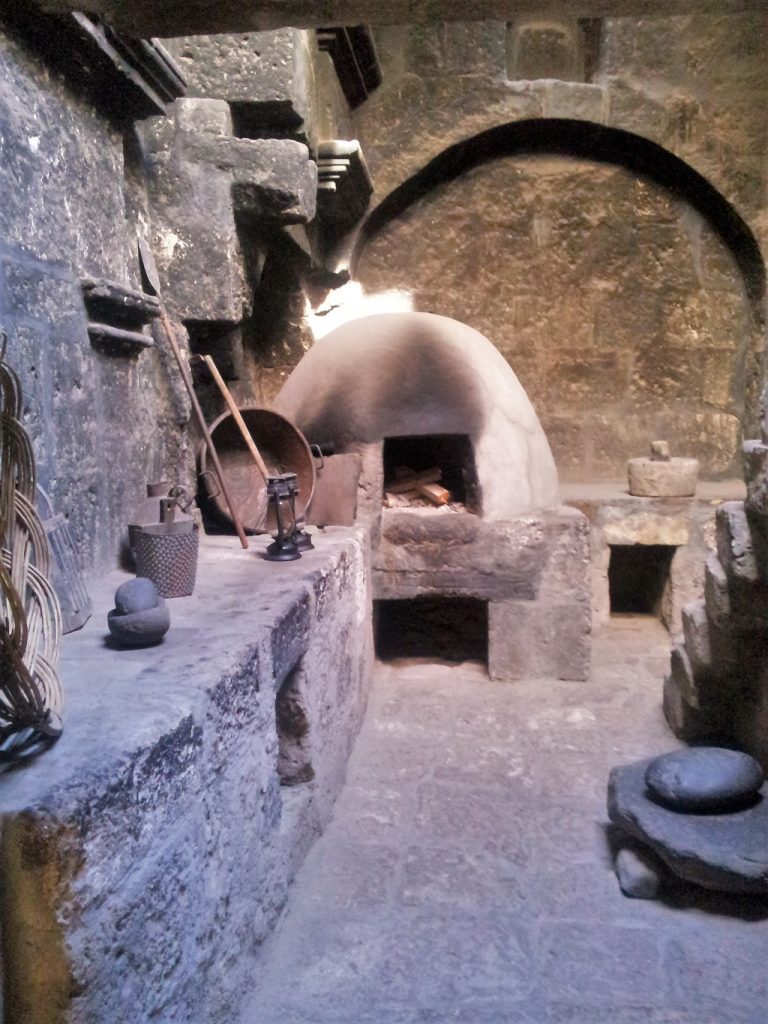 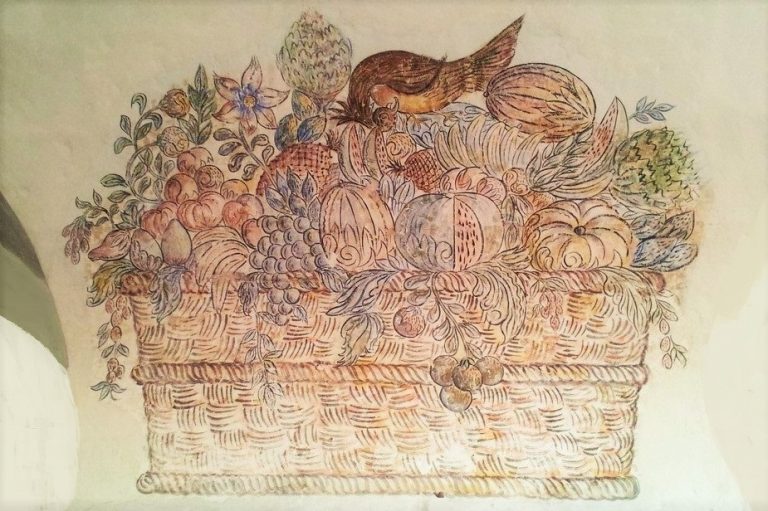 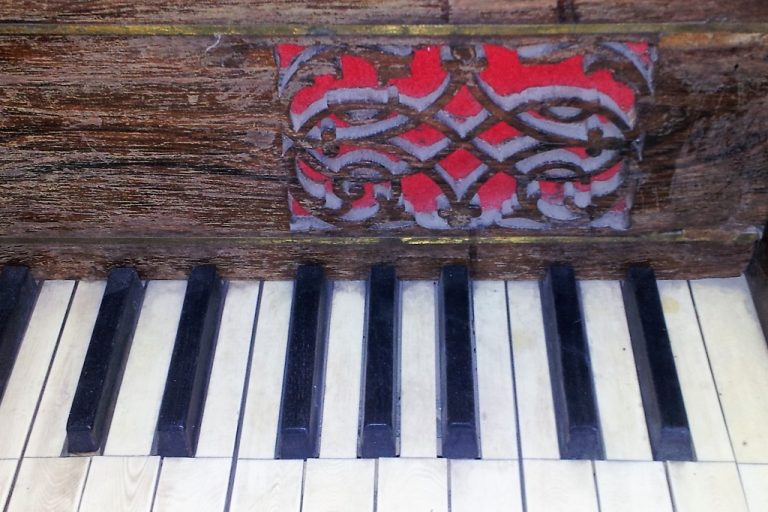 The Great Cloister, bordered by the chapel on one side and the art gallery on the other, provides a grand finale for visitors. Access to the main chapel and its impressive decorated dome, or cupola, is restricted, but if you’re keen to experience the day-to-day routine of the cloistered nuns and can muster an early rise, morning mass is held at 7.30am in the church, although the nuns shun the limelight and remain at the back, shielded by a wooden frame.

The gallery walls are adorned with images of Jesus Christ and the Virgin Mary in various scenes representing their lives. In some instances, indigenous artists, when commissioned to paint Christian religious scenes (non-crucifixion), purposefully depicted Jesus facing downwards, rather than straight ahead or upwards towards heaven, thus signifying the oppression to which their people had been subjected during the Spanish Conquest. At least that’s what a passer-by told me, so I’m not absolutely certain how true it is.

For an unmissable encore, take a stepped pathway up one side of the complex, to gaze at the citadel from above and the expanse of Arequipa beyond. From here, you’ll get a real sense of the two separate worlds of piety and progress, one inside the other, living in harmony. 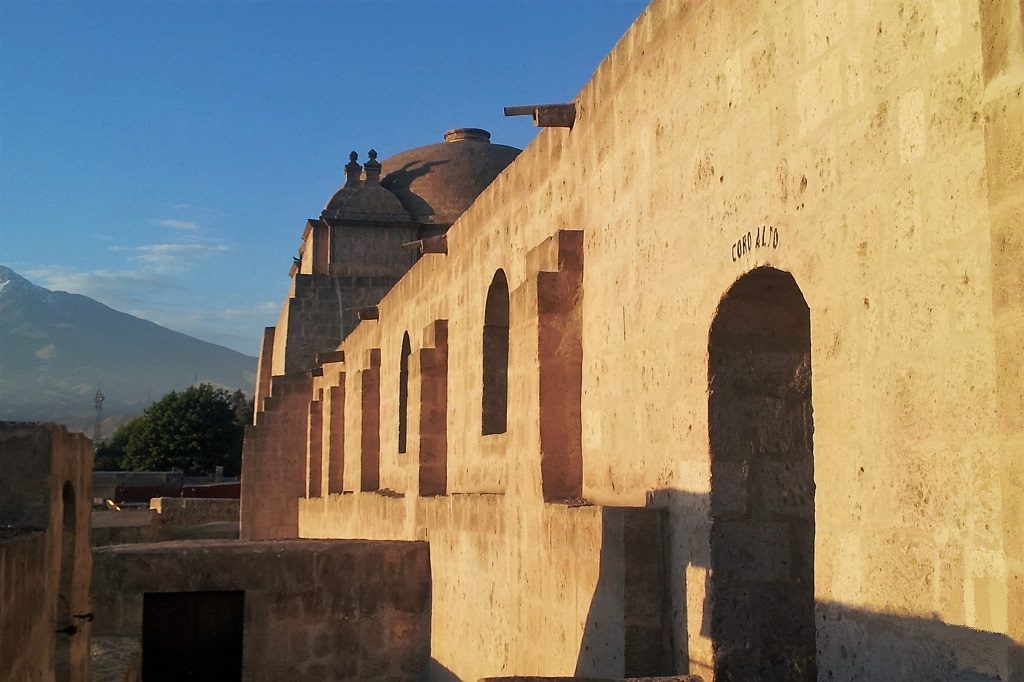 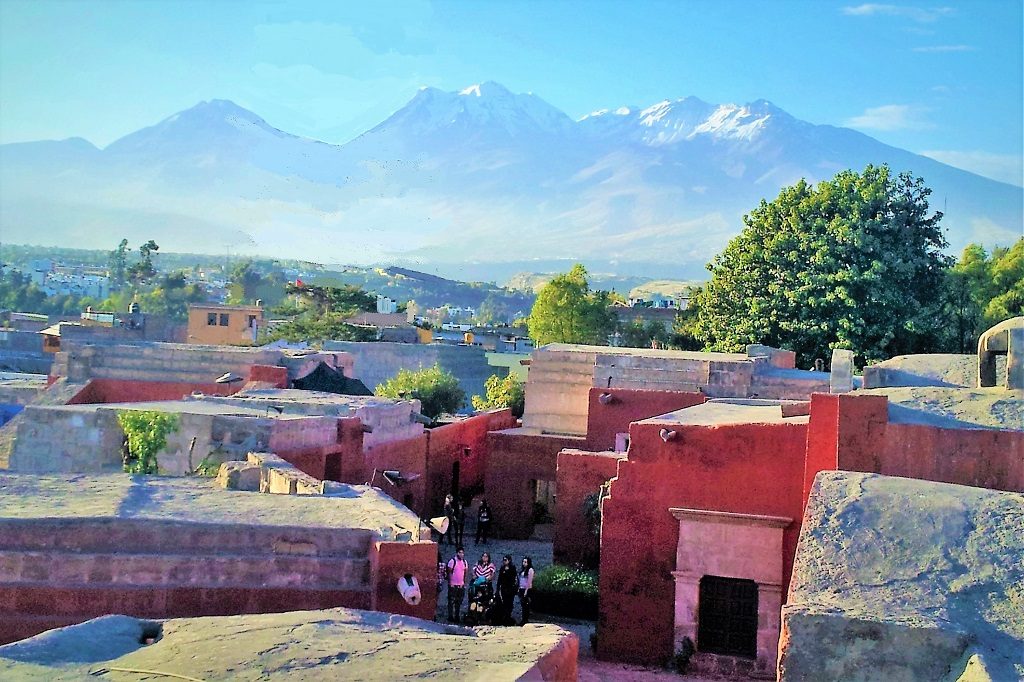 Santa Catalina is admittedly quite expensive as a tourist attraction, at around £8.50 per person (40 Soles), but it’s worth it for its uniqueness and place in Arequipa’s, indeed Peru’s history. I don’t know of anywhere else like it in South America, where the original purpose, whilst greatly reduced in scale, remains intact despite the intrusion of the outside world.

We ambled around without a guide and there are several displays of information in English and Spanish which give you an idea of what you’re looking at, but to get some of the really juicy stories, it would be best to book one of the expert guides for 20 Soles (less than £5), available in a number of languages including Spanish, English, German, Italian, French, Portuguese and Japanese. A good suggestion is to gather a small group to share the tour guide cost. Tours last around an hour, although you can carry on wandering about afterwards, until closing time. Another, even more evocative experience would be to visit the monastery during one of its two open evenings per week and meander along the passageways in flickering candlelight, as the nuns have done for over 400 years. 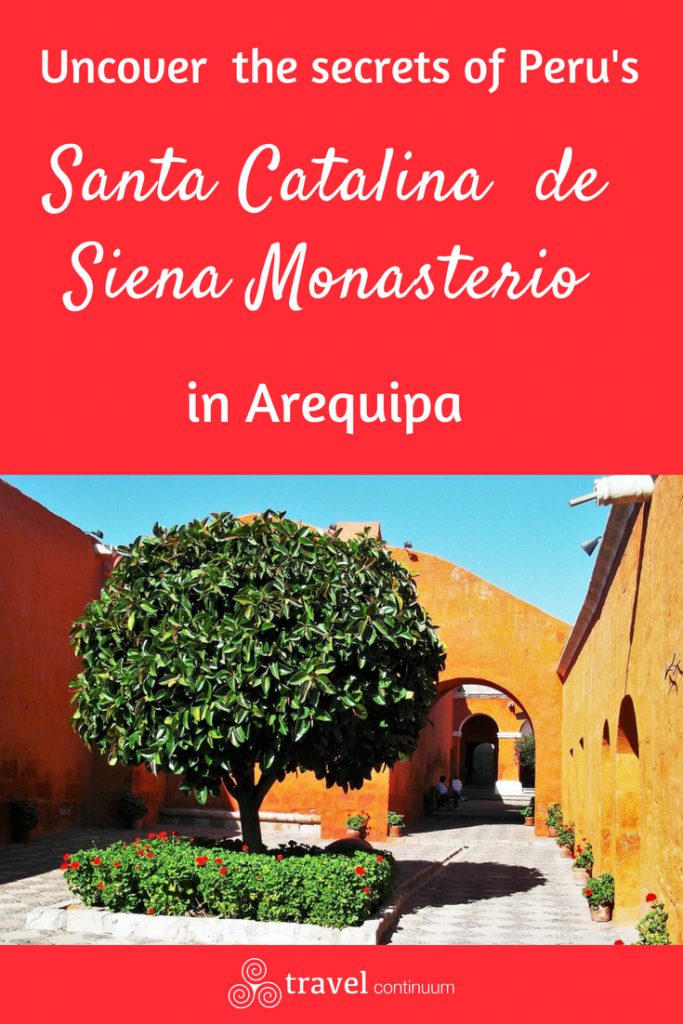 Disclosure: My visit to the Monasterio de Santa Catalina de Siena was a private one, as part of a backpacking tour of South America. I’ve referred to the ‘Monasterio’ as a convent throughout this post, simply as a convention, as ‘monastery’ suggests resident monks rather than nuns. All opinions, as ever, are my own.