It’s not as well-known as its northern counterpart of Alt Empordà, which boasts many popular seaside resorts and the high-profile attractions associated with Salvador Dalí, so I was keen to learn more about it on a recent weekend to the area.

Our mission (and we gladly chose to accept it) was to take a day’s road trip around the region in Toyota’s latest addition to its sustainable vehicle family, the new Prius Plug-in Hybrid car. The campaign consisted of plotting a 50km route, incorporating 5 different destinations from a given selection. I was accompanying my friend Kathryn (from Travel With Kat), with whom I’d previously teamed up for 2016’s Sunshine Coast of Canada road trip, and if that was anything to go by, the day was bound to be rewarding.

Setting off from our elegant base at the Mas de Torrent Hotel and Spa, our first stop was just a few minutes away, so off we sped.

Well, not literally, because that would have been reckless and irresponsible…

Meaning literally ‘carved stone’, this picture-postcard fortified medieval town has been designated one of the region’s historic-artistic monuments. It’s still partly surrounded by the original moat, and its central castle dates all the way back to 1065AD. Walls and arches in Peratallada, literally ‘carved from stone’. The cobbled streets meander through the settlement and evoke a temptation to explore even the most unassuming of alleys, because you never know what you may find…

There are secret courtyards, tucked-away restaurants and shuttered residences with ivy-clad walls. Occasionally a pathway will open out unexpectedly into a sunny square, where the older generations sit on wooden benches and watch the world go by, and other locals meet for a catch-up over a café cortado. 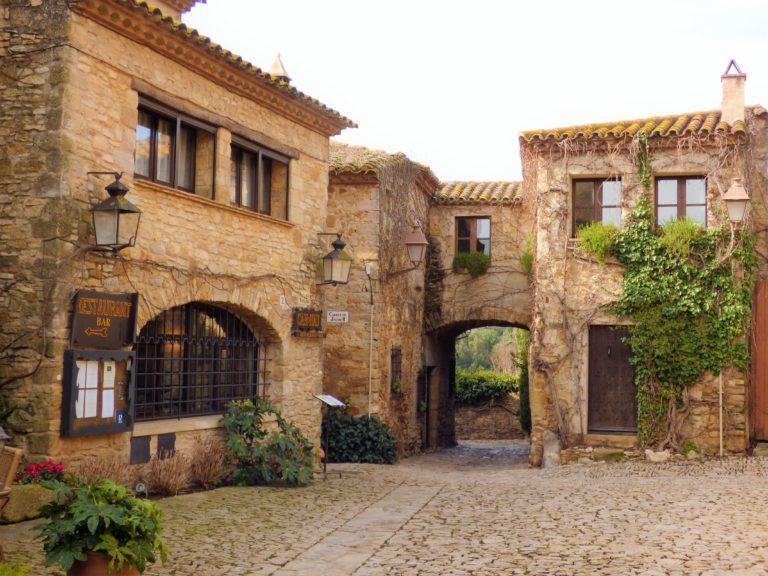 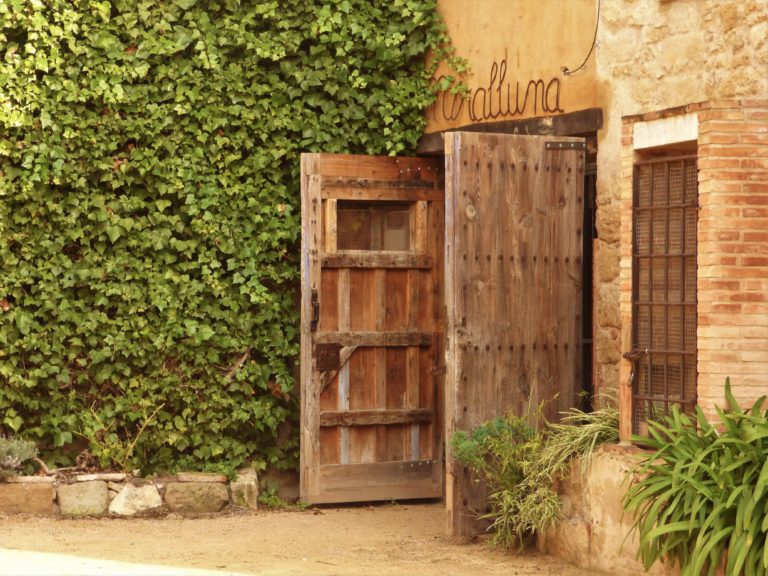 Above: Medieval architecture and hidden courtyards in Peratallada The cobbled path towards the central castle in Peratallada. Running right along the sea front is the most appealing promenade, hugging the coastline and connecting the resort’s several beaches, with an offshoot occasionally leading down to a number of sandy coves and rocky outcrops. Everyone is out and about here today, as I suspect they are most days – and who can blame them? 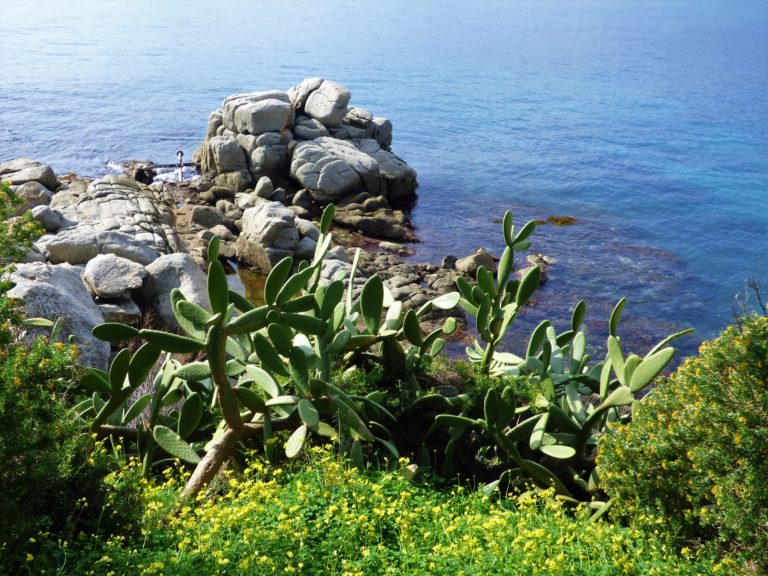 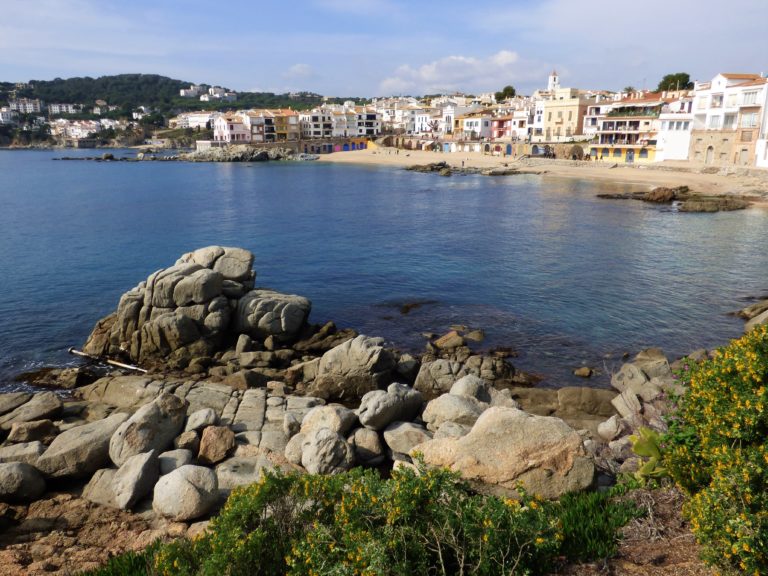 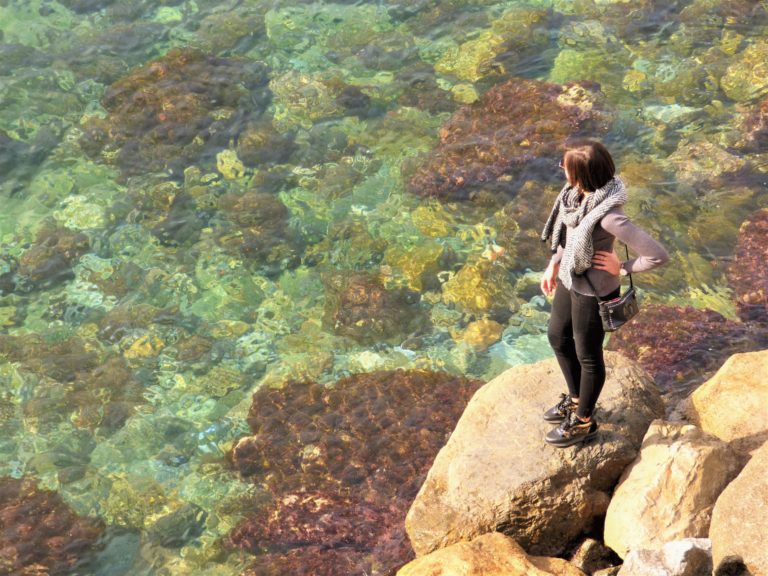 The charm of this town though, is that it doesn’t feel overrun with people, but more like one happy social gathering of family and friends.

Just a shade to the north of Calella de Palafrugell, a large rocky promontory juts out into the Mediterranean Sea. It provides the spectacular setting for the Jardins de Cap Roig, a unique attraction comprising over 1,000 global botanical species, and dotted with a variety of contemporary sculptures, within an eclectic series of gardens designed to evoke the senses. In the 1920s, Russian colonel Nicolai Woevodsky and English aristocrat Dorothy Webster bought this 17-hectare plot in which to live and enjoy the wild, rugged beauty of the Costa Brava and indulge their creativity.

The resulting gardens are their unique legacy which is now conserved by a public foundation for all to enjoy. The grounds are also home to the renowned Festival de Cap Roig, which has featured such musical luminaries as Bob Dylan and Elton John over its 12 years. Our late-winter visit was fleeting, and we sampled just a brief taste of the many-faceted charms of this mini-paradise.

Begur is a colourful and upbeat town, and its location on a natural hilltop – a stone’s throw away from some secluded coves and beaches – makes it very appealing to the more cultured holidaymaker. This is as far from a package holiday destination as you can get along the Costa Brava. An architectural blend of styles through the ages in colourful Begur.

A semi-ruined medieval castle adorns the hilltop summit, and sets off the surrounding mix of architecture, where stylish cafés and restaurants alternate with neoclassical mansions and fishermen’s huts along the Moorish streets. We paused for just a few minutes to get a sense of the place and take some photographs, but it’s clear to me that we missed most of Begur’s beguiling interior. One to come back to and savour, that’s for sure.

Pals’ 15-metre Romanesque clock tower can be seen from miles away, across the verdant agricultural plains which surround this beautiful and intriguing medieval town. It was a sleepy Sunday morning when we arrived, keen to take another look after an all-too-hasty stop the evening before. History seeps through the ancient stones of Pals. A view from on-high, along the old castle ramparts in Pals.

There was barely a soul to be seen as we strolled along the cobbled paths, and if it hadn’t been for the contemporary signs advertising various restaurants and hotels, I’d have sworn we’d been transported back through the centuries.

Pals’ clock tower looms high above the apex of the medieval village.

The main path leads up towards the remains of the castle, perched at the top. From here, we walked around the old ramparts, now partly adorned with cacti, and admired the hazy views across the countryside. There’s a strong Gothic feel to the town, with stone balconies, bridges and pointed archways visible from many points along its higgledy-piggledy lanes. Pals holds more history and appeal than we had time to see on this occasion, but it was a fitting end to our whistle-stop tour of El Baix Empordà. You can’t quite tell here, but navigating our Toyota Prius Plug-in Hybrid through the narrow streets of Pals was a challenge.

So how did we get on with it?  For our thoughts on the car and the driving experience see my review at Boutique Travel Blog and Kathryn’s review at Travel With Kat (*spoiler*….we loved it!). Disclosure: Kathryn and I were guests of Toyota Europe and Toyota GB in Spain for the weekend. Thanks to them for a fantastic stay and the introduction to sustainable motoring and to Kathryn herself for the invite to our road trip #2!