5 Things I Discovered About the Sunshine Coast, British Columbia

In Canada, not Australia.

If you thought this westernmost of Canadian provinces was all about the Rockies, the gateway city of Vancouver and great swathes of temperate rainforest brimming with bears, you’d be overlooking a fascinating little series of coastal communities that deserve to be equally celebrated.

It was on a changeable June morning that I found myself driving an RV for the first time and sitting patiently at a ferry port, waiting to cross to British Columbia’s best kept secret. Here are five of the discoveries which awaited me. Well, I’d never heard of it! Unlike its more famous antipodean counterpart, this little stretch of coastline is incredibly rugged, with countless coastal inlets and a variety of coves, bays and picturesque settlements to explore.

Its appeal is multi-faceted; for each person settling there for the relaxing lifestyle and strong sense of community, there’s an adventurist just itching to go kayaking, sailing, diving, hiking or cycling. But the common lure in this region is Mother Nature herself, often resplendent in sunshine, occasionally enigmatic in mist. But where exactly is it?

It fringes part of the Canadian coast, north-west of Vancouver, separated from Vancouver Island by the Strait of Georgia. A 40minute ferry hop from Horseshoe Bay on the outskirts of Vancouver brings you to the southernmost point at Langdale, and the beginning of the Sunshine Coast Highway 101. 180km later, and you reach the quasi-tropical little paradise of Lund and the upper end of the Highway. Beyond, lies the sprawling beauty of Desolation Sound, named by Captain George Vancouver who, upon discovering the area in 1792, felt ‘there was not a single prospect that was pleasing to the eye’.  Never was a destination more unjustifiably misrepresented. But back to the Sunshine Coast….

Running for 18 years from 1972 to 1990 The Beachcombers was a TV show centred around the life of Greek-Canadian salvage tradesman ‘Nick Adonidas’. The plots featured Nick’s fictitious coastal exploits aboard his logging tug Persephone, and the daily trials of his home community of Gibsons Landing, the social hub of which was Molly’s Reach café. 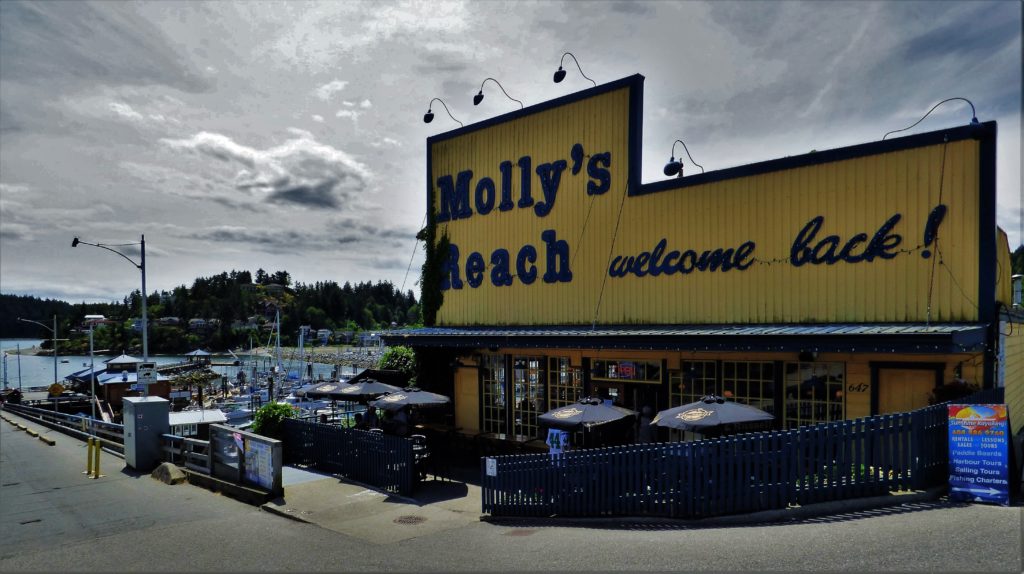 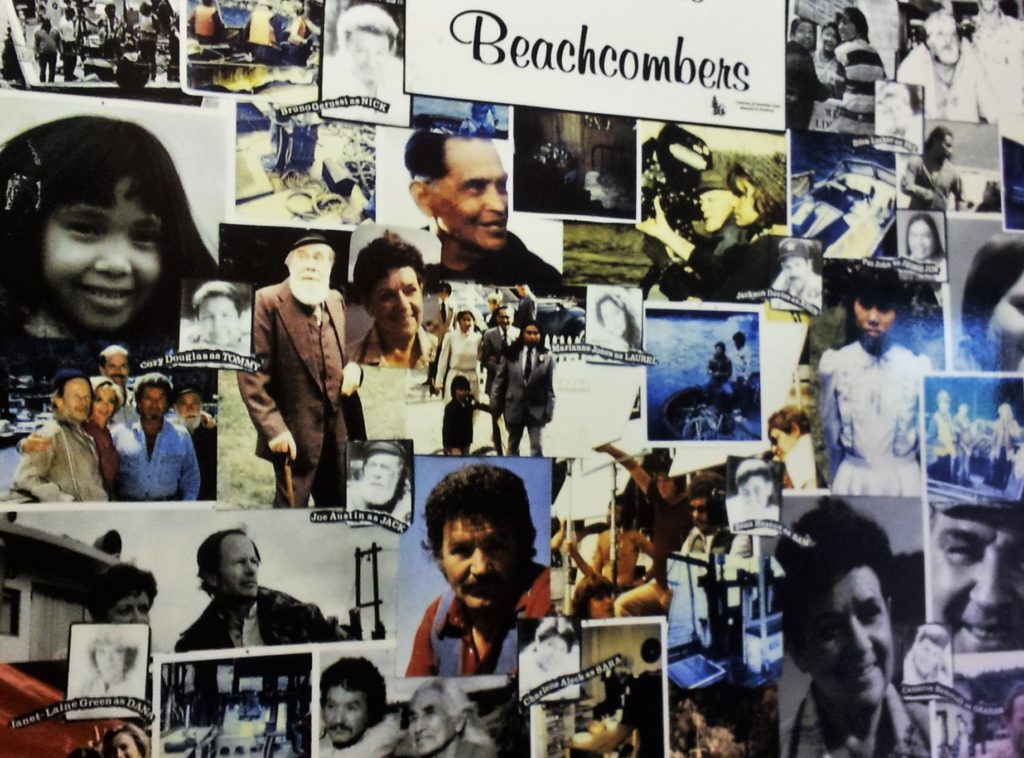 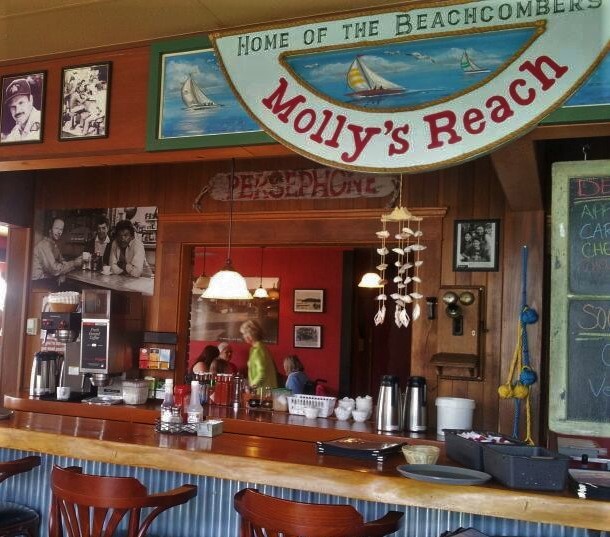 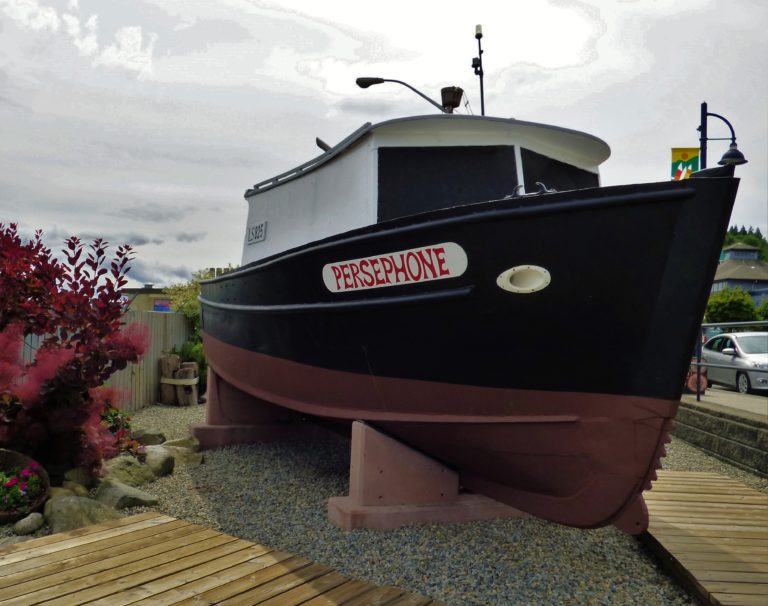 The building playing the part of the café (as the website says, Molly’s Reach ‘was a character in its own right’) started out as a grocery store in the 1920s before being sub-let to broadcaster CBC. 5 years after the series was cancelled, savvy investors decided to turn it into……a restaurant called Molly’s Reach, resulting in a quirky example of life imitating art. There’s no culinary tokenism here, because the food is great quality. I found myself unable to resist their famous fish ‘n’ chips – washed down with a pint from the Russell Brewing Company, amid the pleasant hubbub of fellow diners.

With over 50 galleries, craft studios and artisan workshops, the Sunshine Coast is home to more artists per capita than any other area in Canada. It’s little wonder, as there’s abundant inspiration in the natural surroundings and rich cultural heritage of the region.

You’ll find many experts in textiles, oils, glass, clay, jewellery or photography, but occasionally something a little more leftfield. At Jim’s Wooden Creations, for example, DIY tools usually only used for carving out an existence have been redeployed – as implements for carvings of a different nature. Jim Harding uses chainsaws, grinders and rotary tools to create a variety of sculptures, mainly out of cedar wood. 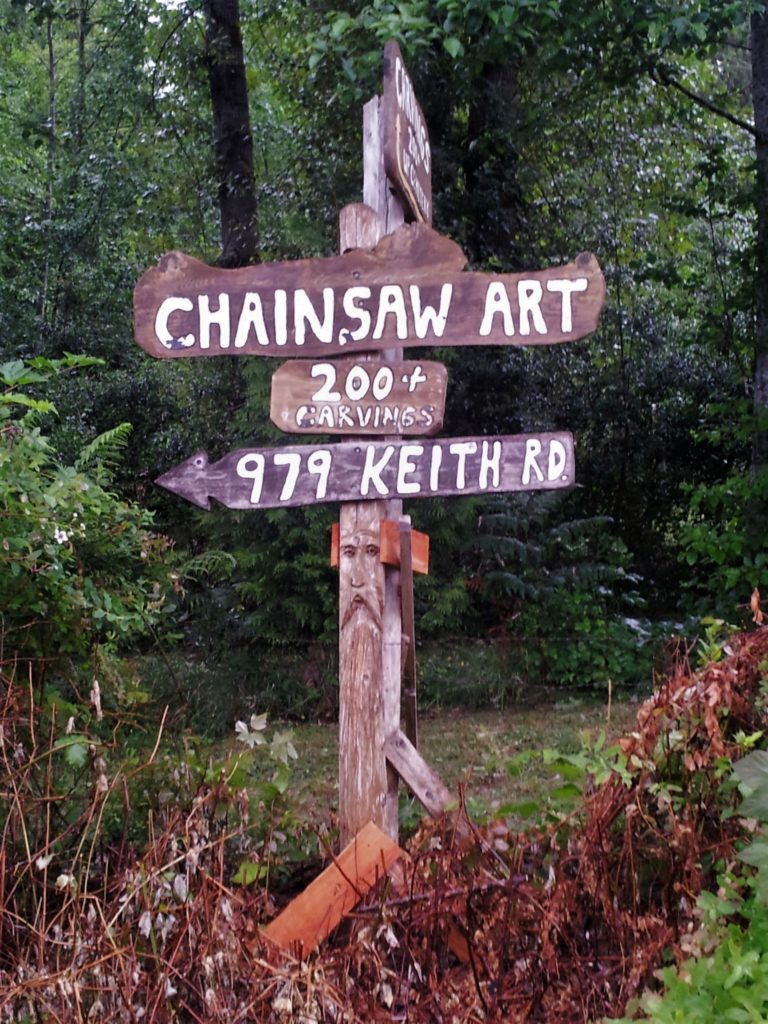 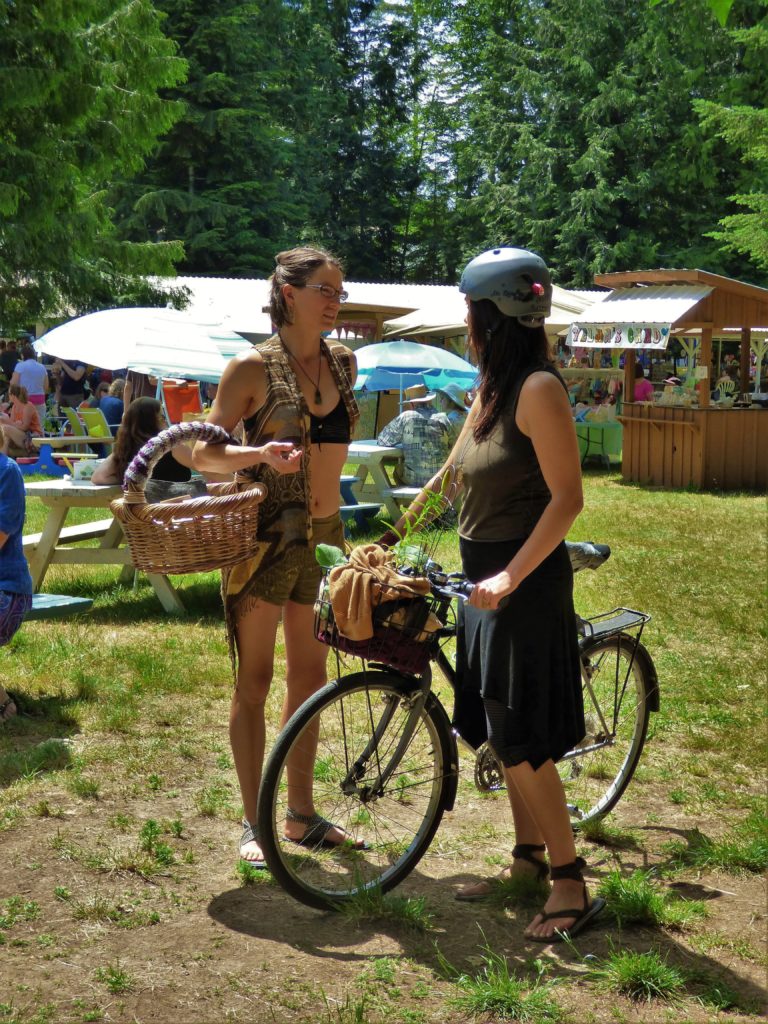 Local creations are sometimes sold at one of the popular markets such as Sechelt Farmers’ and Artisans’ Market and Powell River Farmers’ Market, where they vie for attention with home-grown produce and aromatic bakes. These gatherings are also social forums, where families assemble for a snack, say hello and perhaps take a turn on an open mic stage. 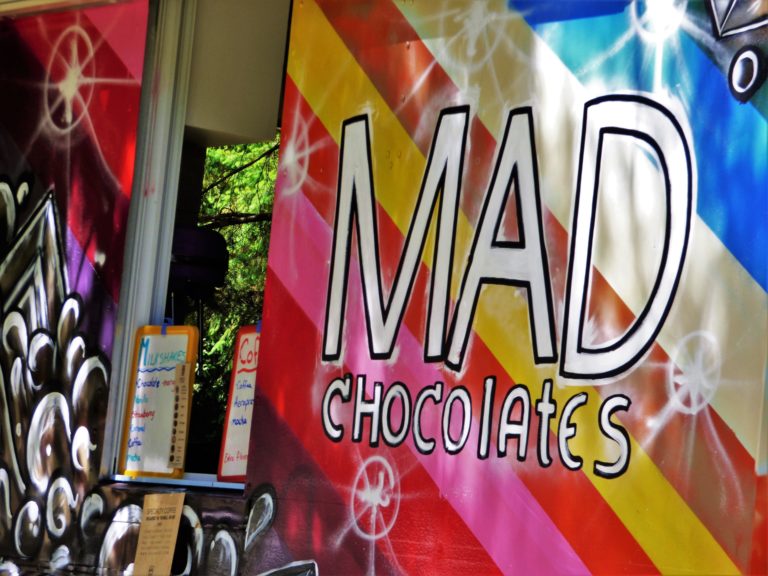 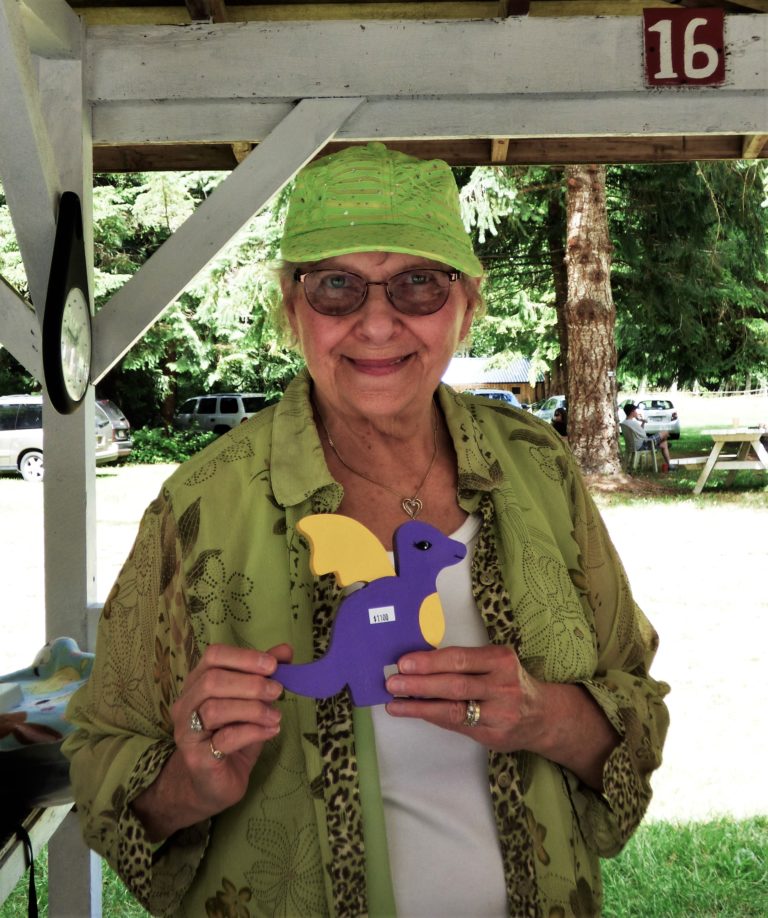 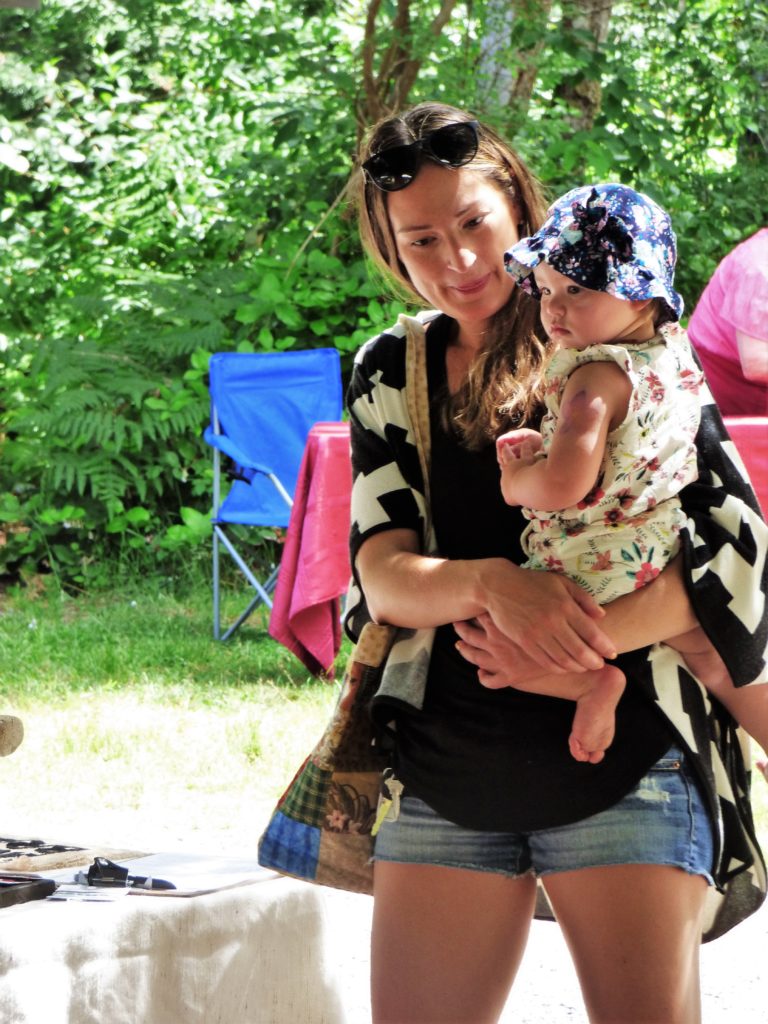 Movies Past and Present

The most surprising artistic legacy however, has to belong to the Patricia Theatre, in Powell River, Canada’s oldest continuously operating movie theatre.

Their web page contains a wonderful detailed history (from a book by Karen Southern) of the life and times of the theatre, paying homage to those who piled in over the years, be they local cinema-goers, staff or the odd famous actors. There’s even a nod to a British cultural export, the Carry On films…Ooh, Matron!

“The “Carry-On Gang” debuted about this time, and ears were strained to hear every line of the English banter. Content was getting more risqué, and the audience roared at Carry on Nurse when they saw a daffodil adorn patient’s just-below-screen derriere.”

4. Craft beer is as popular here as anywhere else

During the last 5-10 years small, independent breweries have sprouted up all over the UK. Now I love a good ale as much as the next person who loves a good ale, but I honestly thought this surge in specialist breweries was as much a Brit hipster thing as anything else. Not so. It’s happening everywhere, and Canada is no exception. 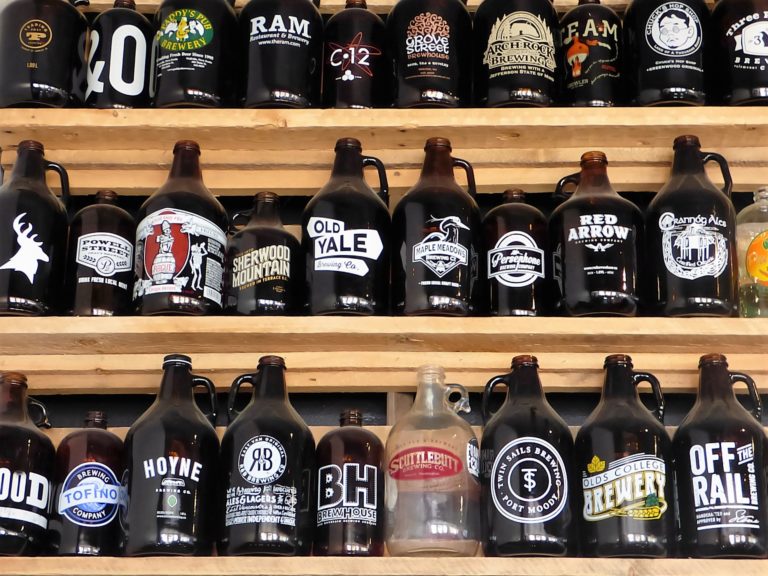 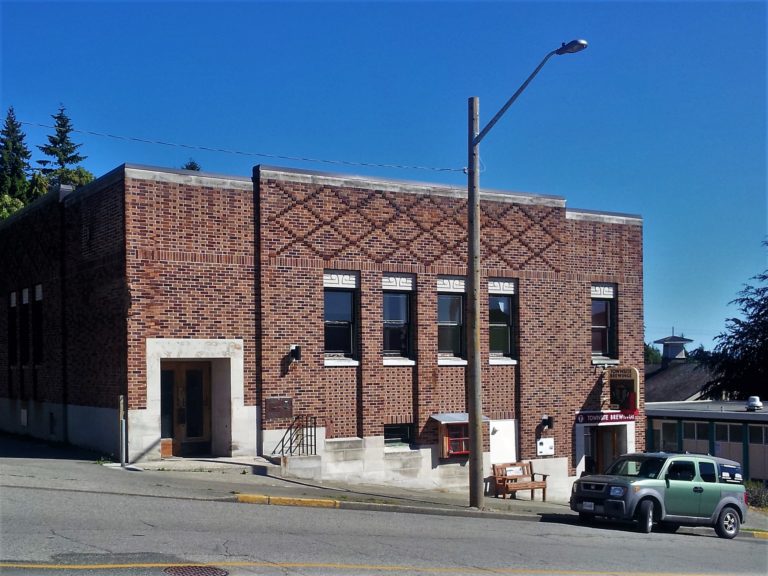 At least in this snug little corner of the Pacific North West, a number of both fledgling and well-established Sunshine Coast outfits are producing a surprising variety of homegrown brews. From the Persephone Brewing Company on the outskirts of Gibsons (named after the boat on The Beachcombers) to Townsite Brewing Inc. located in an unusual Art Moderne building in the original National Historic District of Townsite, grains are malted and mashed, hops and yeast sprinkled in, and many a taster bat is sampled by appreciative locals and visitors alike.

For serious hopheads, many of the breweries offer informal tours of the sites, but there is always the sense that there’s only one way to prove the quality of their processes….. 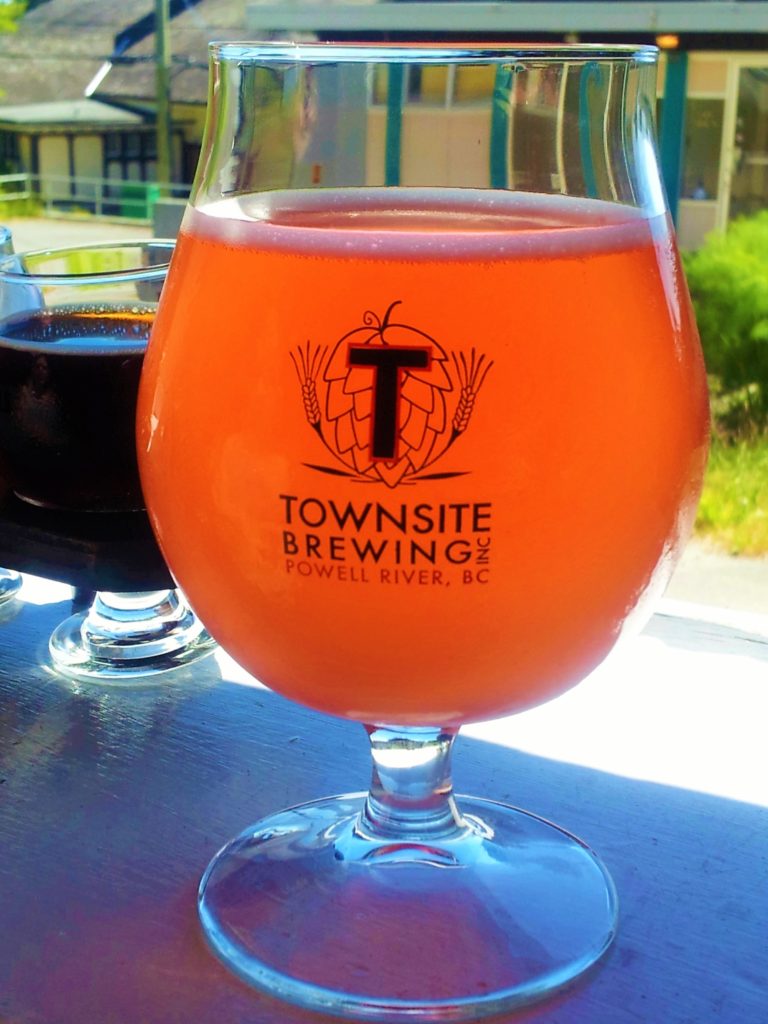 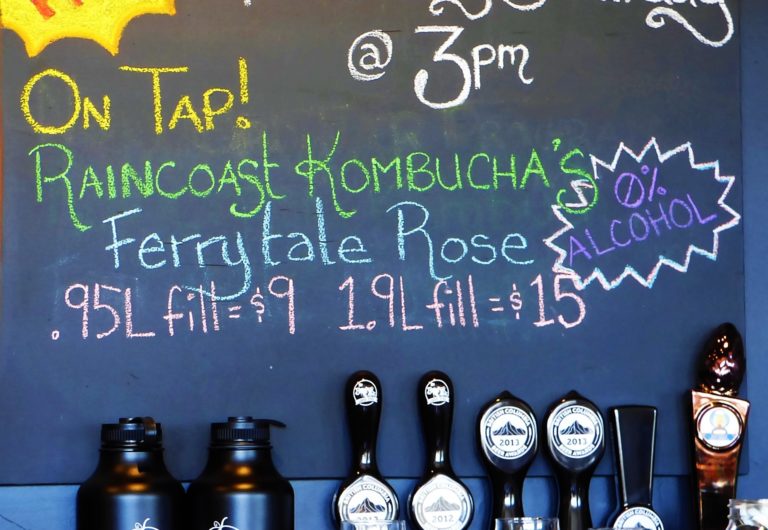 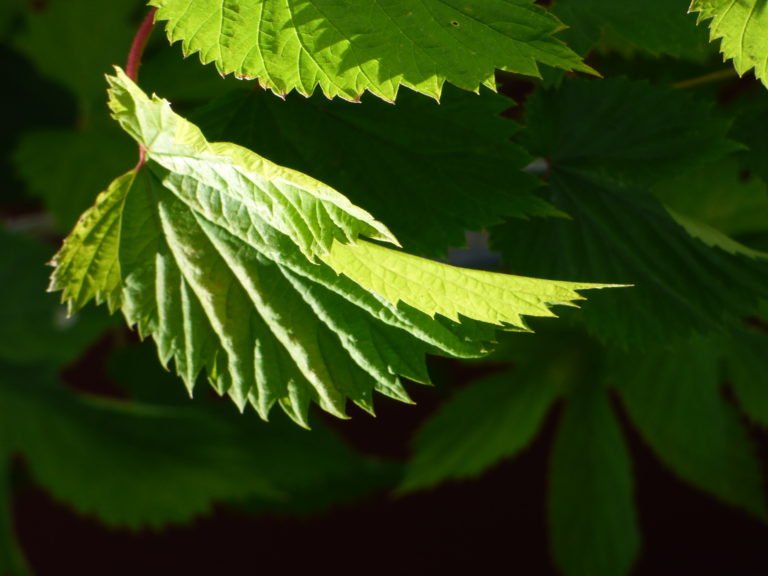 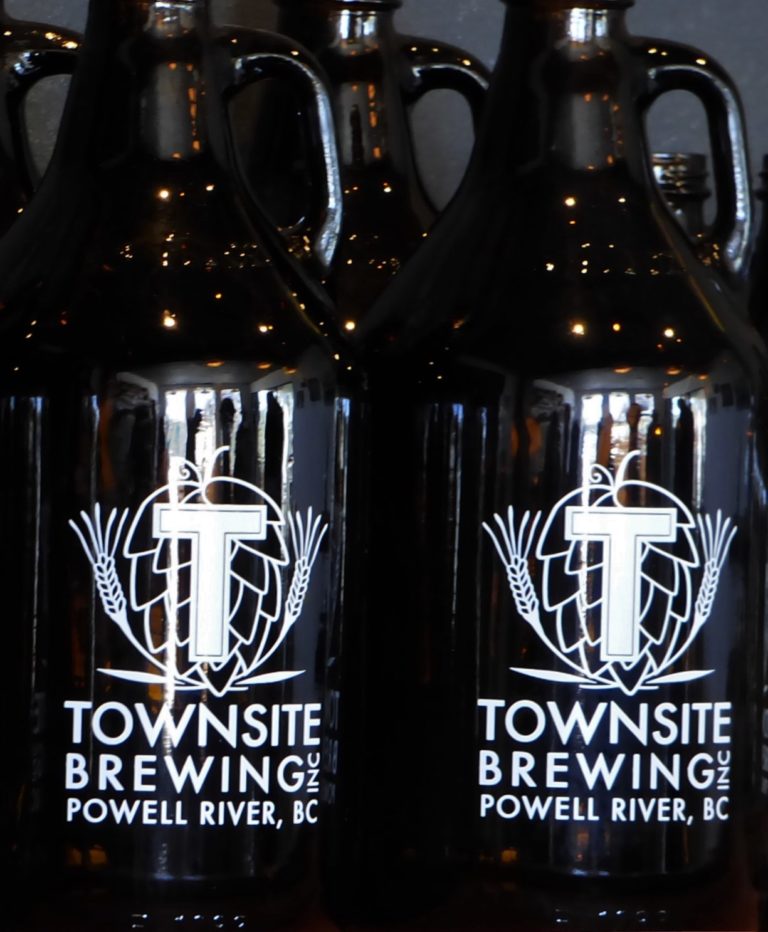 Thankfully, when it’s your turn to be driving the RV, there are non-alcoholic beverages to quench your thirst instead. With names like Raincoast Kombucha’s Ferrytale Rose, you almost don’t feel like you’re missing out. Much.

As pleasant surprises go, Lund village is hard to beat. Most of the activity is concentrated around the very dinky and pretty harbour, and one of the chief draws is the renowned Nancy’s Bakery, which instantly became one of my favourite places – without my even sampling their famous cinnamon buns. This modest little building and its outdoor patio area, fringed with palms and imbued with a chilled bohemian vibe, is a delightful little gathering place with excellent food (my hefty breakfast was superb), and a view of the bustling comings and goings of harbour life. 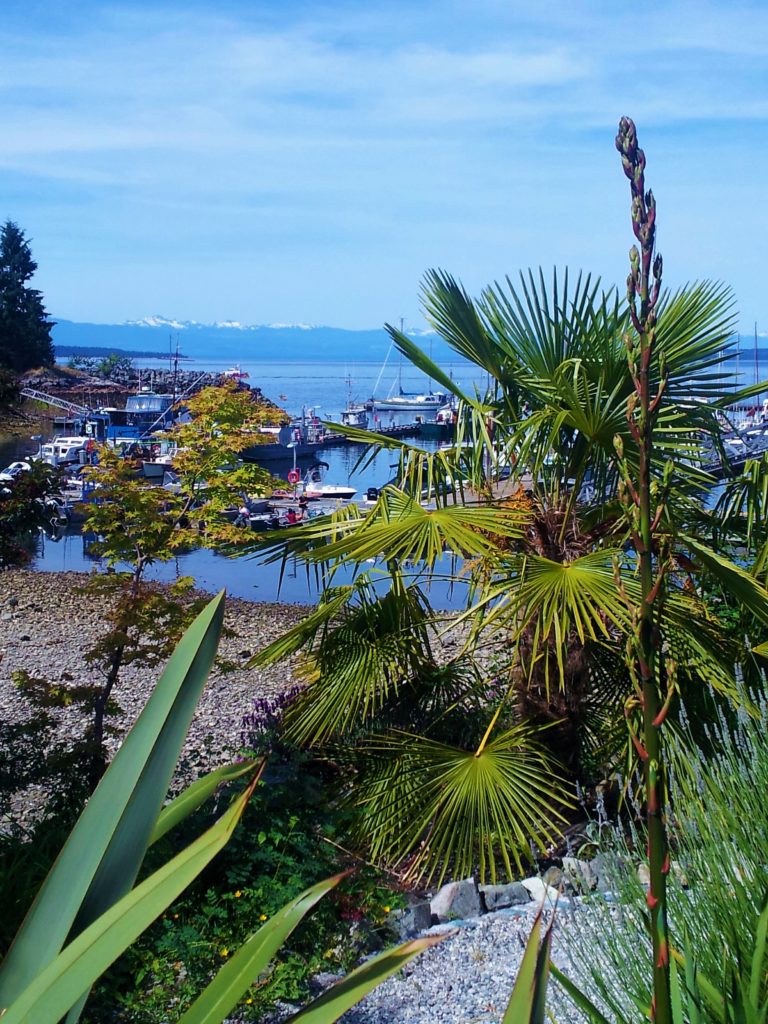 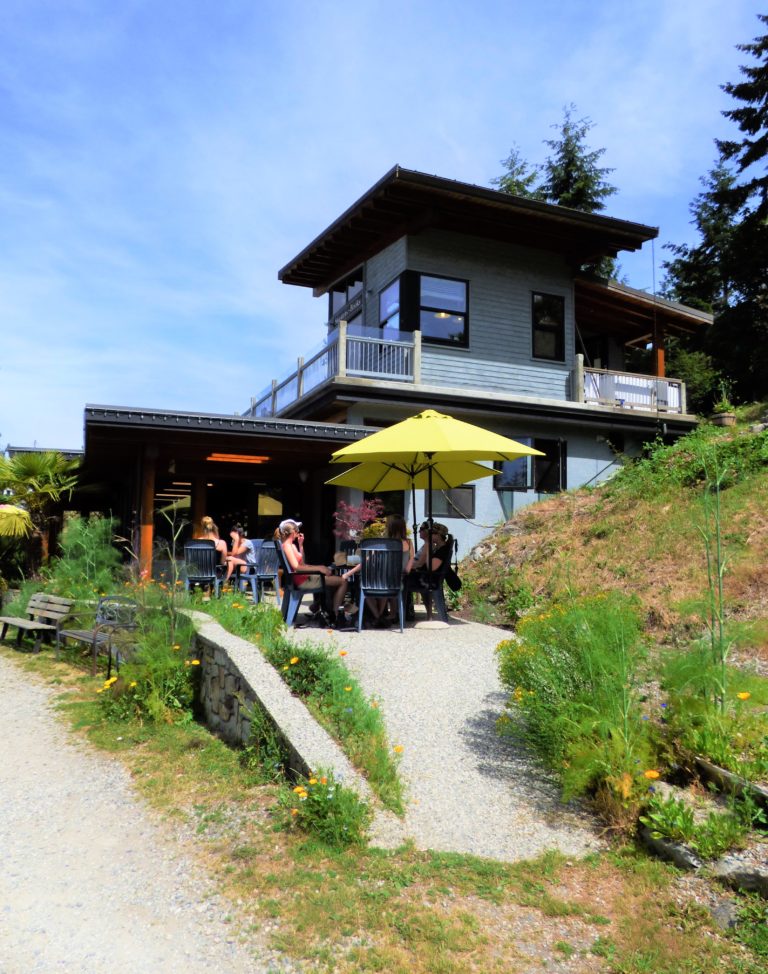 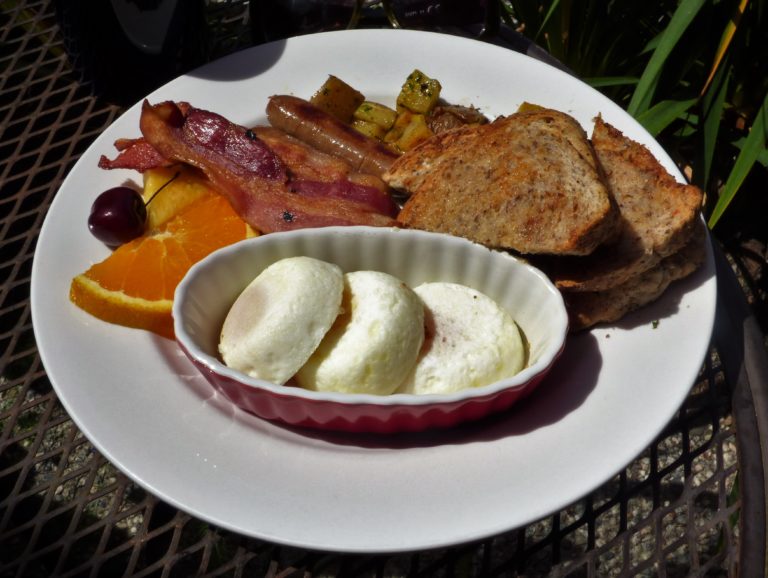 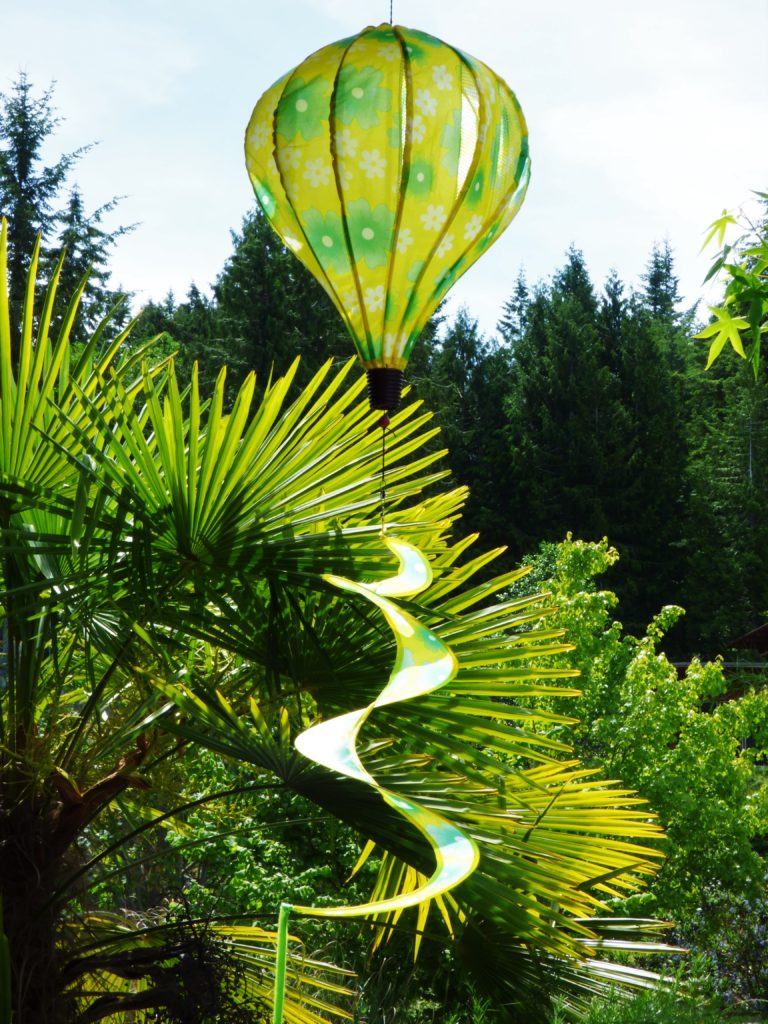 Back to the Forefathers

If you’re thinking Lund sounds more Scandinavian than Canadian or First Nations, it’s because it was named after a city in the home country of Sweden’s Charlie Thulin, the first European settler in 1889.

A key landmark in the area is the Historic Lund Hotel, built by Charlie and his brother Fred (honestly, they were Swedish). After serving as a bedrock of the community for decades, the hotel fell into disrepair at the end of last century before being rescued in 1999 and renovated. But prior to any Nordic influences, this area had been inhabited for centuries by the indigenous Tla’amin group of Coast Salish people. Earlier this year, things finally came full circle, as the hotel’s website describes:

In March of 2016 the Tla’amin Nation purchased 100% of the shares. In April, their treaty was ratified and the hotel is now situated on treaty land.

The people of the Sunshine Coast couldn’t be more welcoming – they are proud of their heritage and eager to share the delights of the place they call home.  There’s no shortage of mod cons here, yet the area retains a feel of yesteryear, when people were content in their own skin and with their lot. If I lived here, I know I’d feel the same. 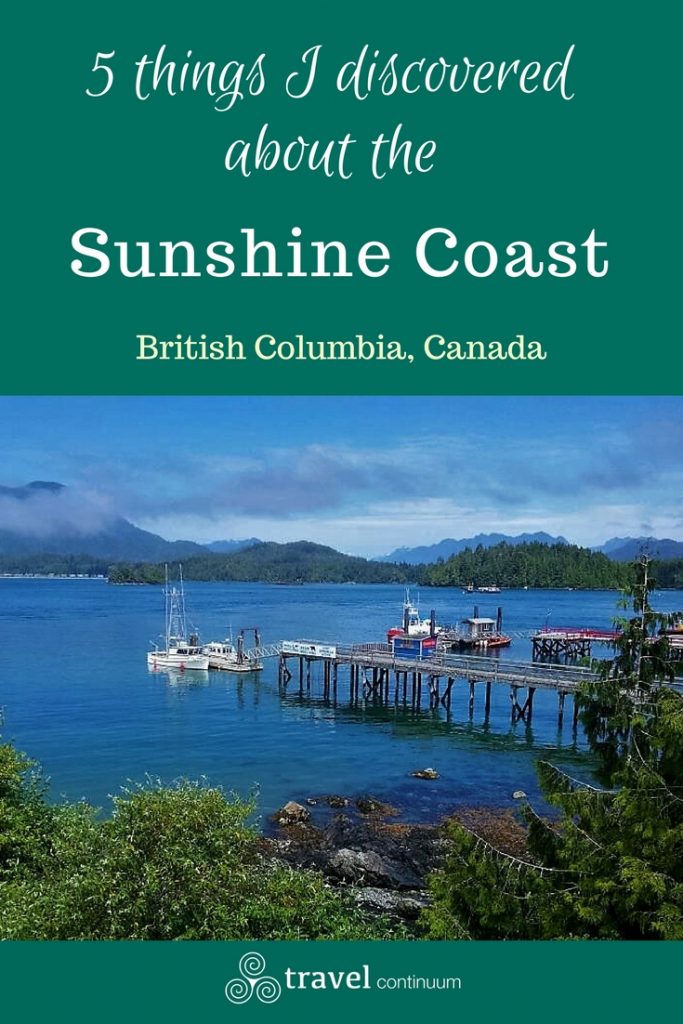 Travelling Around the Sunshine Coast

Highway 101: Highway 101 is the main thoroughfare running across the length of the Sunshine Coast, but it isn’t a continuous stretch of road. The 19km stretch of water called Jervis Inlet separates Earls Cove from Saltery Bay, with a ferry needed to cross between the two points.

The Upper section between Townsite and Lund has a few twists and undulations, but it’s what you’d expect, and it’s generally a good coastal mountain road. If you do visit Lund in high season, be prepared for limited parking (especially for larger vehicles!).

Ferries: Ferries are logistically crucial to this area because there’s no road network connecting the coastal communities with each other. BC Ferries provides a regular, comprehensive schedule to service the area well.

Inland: The steep, furrowed topography of the landscape as you head inland means there are no road links between the coast and the rest of British Columbia either, so exploration can only really take place on water or by air. There are many organisations offering transportation and tours.

On foot: If you’re into hiking, the epic 180km Sunshine Coast Trail will take you from Sarah Point to Saltery Bay, along shorelines, across creeks, through old-growth forests and up onto panoramic mountaintops. How much or little of it you take on is down to time and stamina! 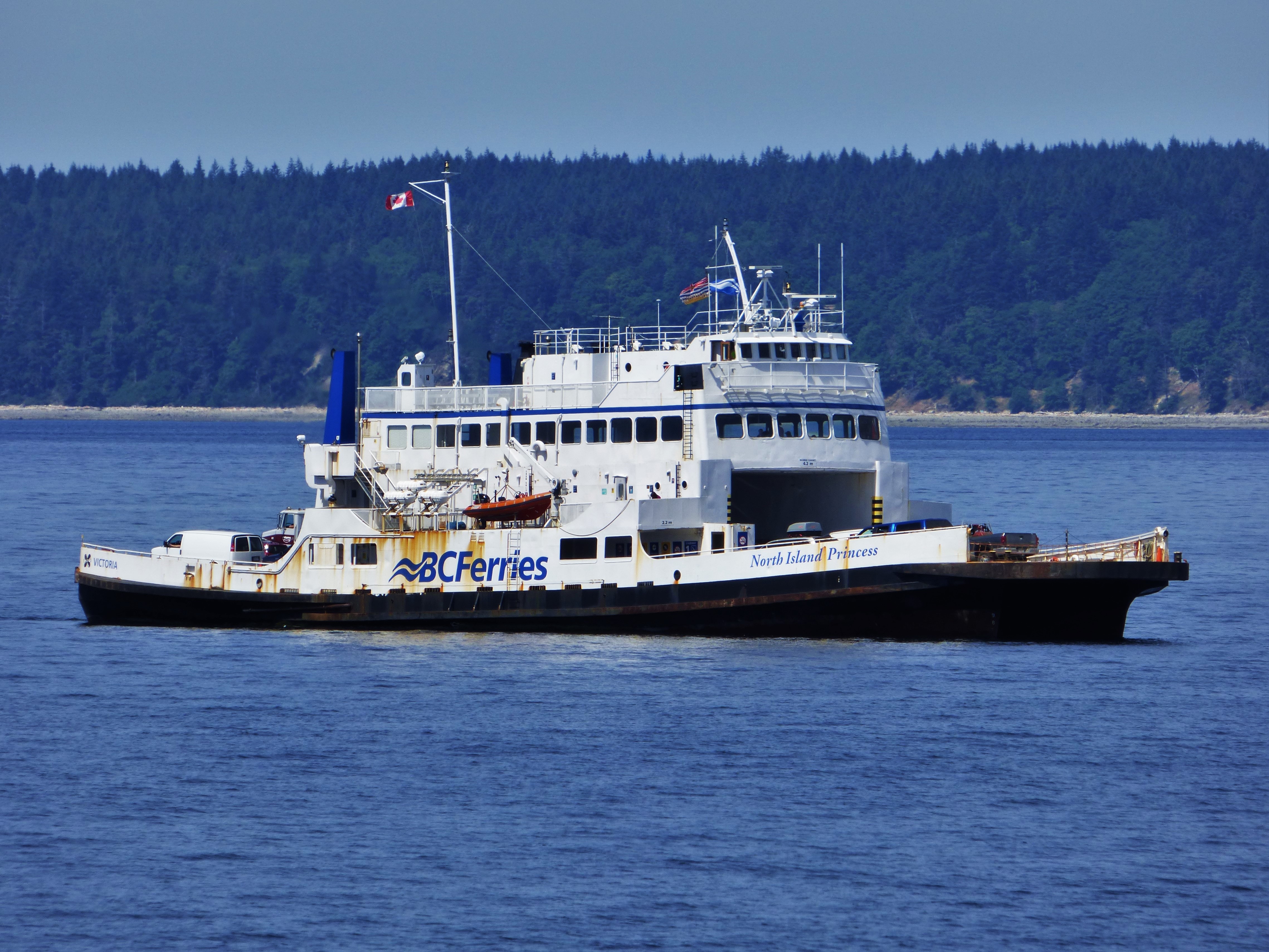 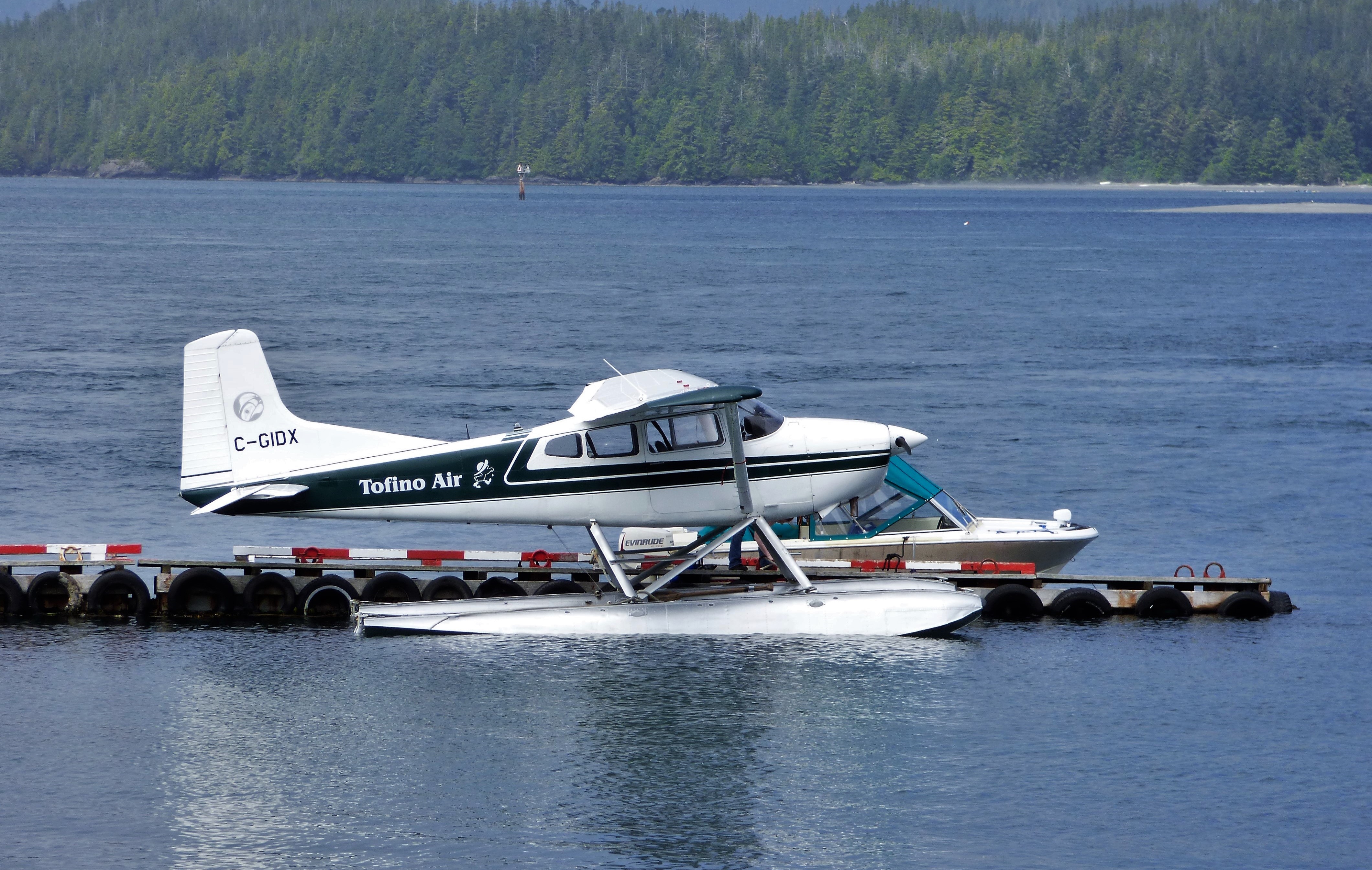 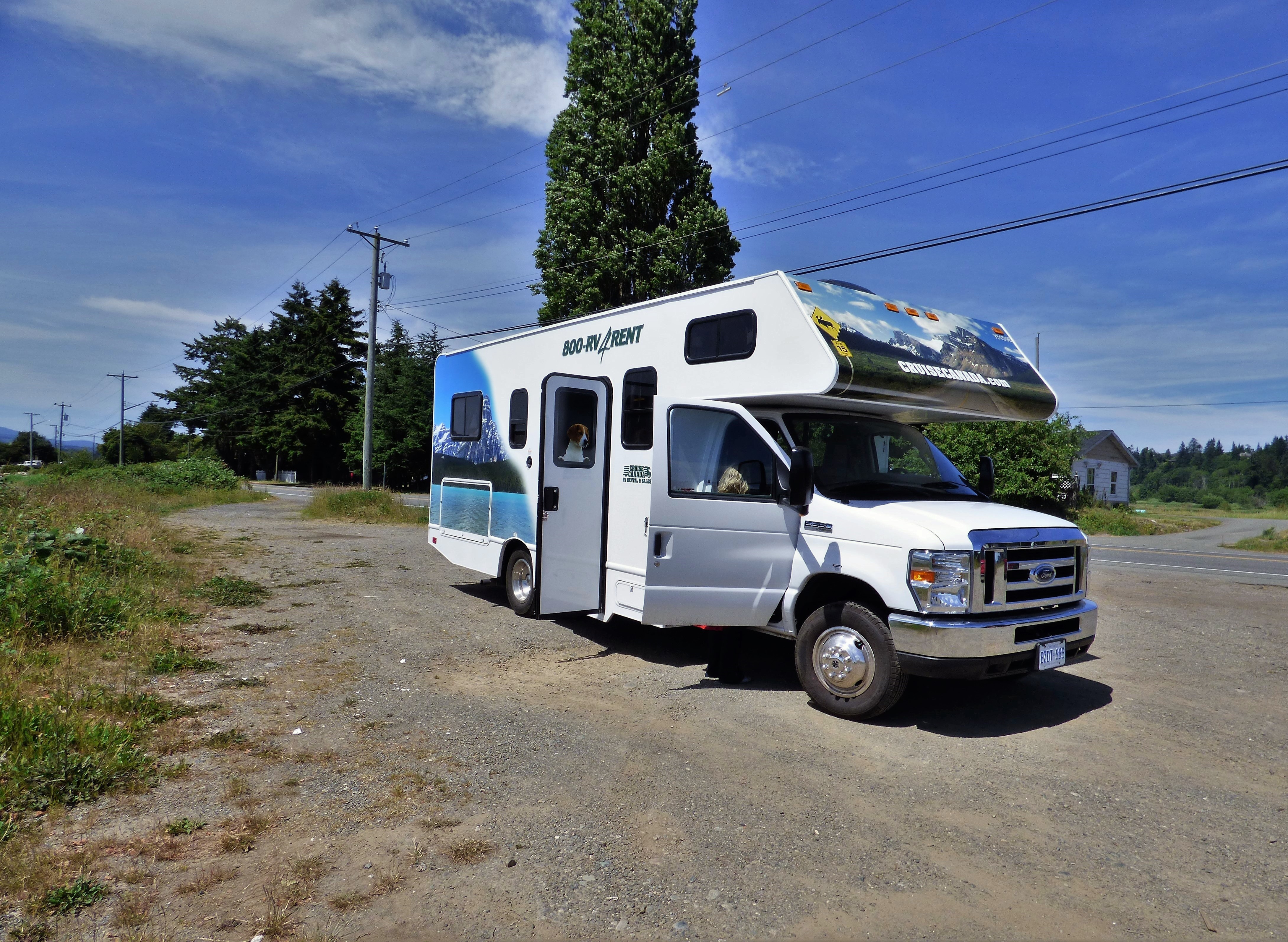 Disclosure:  I visited the Sunshine Coast (courtesy of Destination Canada) in support of the Explore Canada RV Road Trip 2016, via invitation from Kathryn at Travel With Kat and in association with Travelator Media. My thanks to all involved, with a special debt of gratitude to Persephone/Rocky/Monty the RV (and its main keepers Cruise Canada) for keeping us all safe and well.